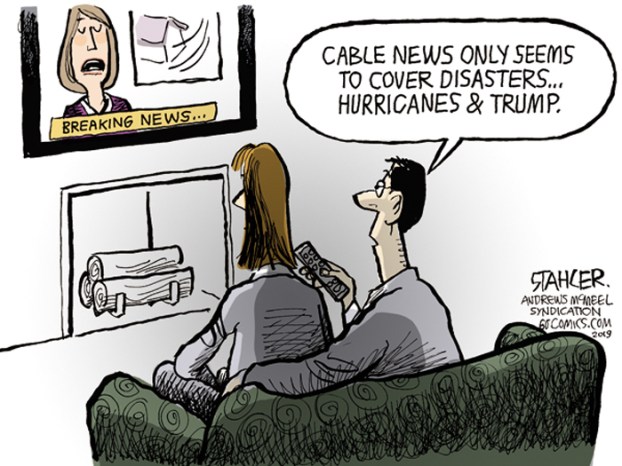 Political tribalism keeps getting worse. The demand for unthinking and uncompromising loyalty keeps getting louder. Individuals or institutions that try to maintain a sense of fairness and balance, that don’t want to choose sides in our Uncivil War, are branded as weak-kneed, faint-hearted heretics.

Two recent events highlight this dangerous development. First, Fox News was excoriated by President Donald Trump for daring to interview a Democratic Party official. And second, The New York Times was lambasted by liberal critics for a headline that was not, in their view, sufficiently critical of the president’s racist rants.

The parallels, of course, are imprecise. Trump has been eviscerating the press as a campaign strategy for years. But the similarities are still striking.

The president and his leftist critics share an instinct for intolerance: a deep disdain for anyone who strays from the party line, a demand for purity combined with a towering self-righteousness. You have to be on the Red Team or the Blue Team, a Loyalist or a Resister.

Both sides fundamentally misunderstand the role of impartial and independent journalists. We belong to no tribe, root for no team. And if that sounds musty and old-fashioned, well, so does the Constitution, which not only protects a free press but defines it as essential to a healthy democracy.

Trump was so outraged by Fox reporters, pollsters and anchors who dared to question the Lord of the Lies (as opposed to the bootlicking sycophants who inhabit the network’s prime-time schedule) that he tweeted: “The New @FoxNews is letting millions of GREAT people down! We have to start looking for a new News Outlet. Fox isn’t working for us anymore!”

Fox anchor Neil Cavuto spoke for many of his colleagues when he replied on the air, “Mr. President, we don’t work for you.” But Trump doesn’t want to hear that. If you dare to contradict or fact-check the president, you are “all but dead to him,” Cavuto added, and the president’s core supporters share his expectation of complete fealty. They’ve told the anchor, he said, that “I am either with him totally, or I am a never Trumper fully.”

Over on the left, the latest brouhaha was trigged by a Times headline over a story about a Trump speech that read, “Trump Urges Unity vs. Racism.” The words were technically accurate but not nuanced or skeptical enough, and Times editors acknowledged the problem and changed it after the first edition. But that was not nearly enough to quell the bombastic blowback.

Rep. Alexandria Ocasio-Cortez tweeted that the headline served as “a reminder of how white supremacy is aided by — and often relies upon — the cowardice of mainstream institutions.”

Sen. Cory Booker upped her on the outrage meter, tweeting, “Lives literally depend on you doing better.”

Dan Pfeiffer, a senior adviser to President Obama, told Politico: “A vast swath of Democratic voters are pretty angry at the media. They see a racist liar in the White House and a media too afraid to call him a racist or a liar.”

At a meeting of New York Times staffers, one told editor Dean Baquet that the paper was “actively misleading” readers by being too soft on Trump.

But Baquet, like Cavuto, hit back. “Our readers and some of our staff cheer us when we take on Donald Trump, but they jeer at us when we take on Joe Biden,” he told the staff meeting. “They sometimes want us to pretend that he was not elected president, but he was elected president. And our job is to figure out why, and how, and to hold the administration to account. If you’re independent, that’s what you do.”

Baquet told CNN that there is a “generational divide” in the newsroom, and the meeting made clear there’s a racial one as well, with reporters of color among the loudest critics of their own bosses. But Baquet — the first African-American editor of the Times — is determined the resist their pressure. “Our role is not to be the leader of the resistance,” he insists.

We believe deeply in the traditions that Cavuto and Baquet are defending. No news organization is perfect, but at their best, they don’t work for the right or the left — for Trump or his rivals, for the Reds or the Blues. They are not Loyalists or Resisters.

They are simply journalists — fact-finders, truth-tellers — and more valuable than ever.