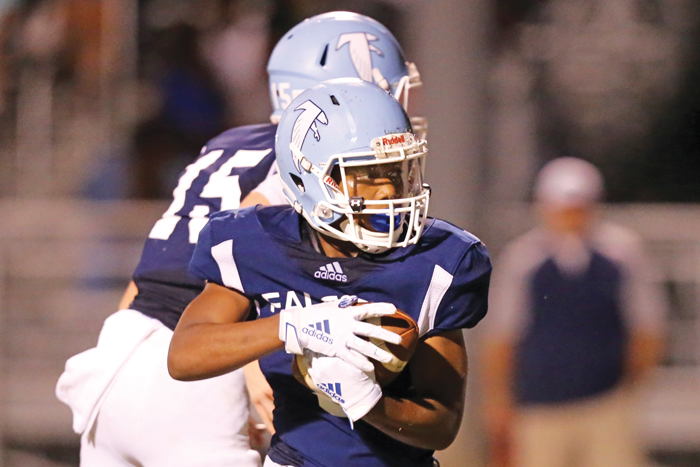 SALISBURY —Two weeks into a new season, and the only undefeated team left in Rowan County is Salisbury.

Assuming Salisbury beats South Rowan in November —that appears likely given the teams’ vastly different results against Carson — the Hornets will go 3-0 in the county.

But we know the Hornets won’t win tonight. They’re off.

Before moving on from Salisbury, I should report I was proven wrong last week when I wrote it would be “the first Carson-Salisbury football game without Joe Pinyan prowling a sideline.” While he didn’t coach, the new Catawba assistant did prowl both sidelines, Salisbury’s in the first half and Carson’s in the second half.

A West-Salisbury game might be 0-0 at the end of regulation, but at least it would be a barrel of fun and well-attended.

Unfortunately, the schools, both of whom claimed state titles in 2010, haven’t met in an official game since 2014. Maybe Salisbury won’t be in a 10-team conference after the next realignment and both schools can find room on their schedules.

• 14 straight against Salisbury. The (Hornets’ most recent win was in 1996.  Conrad Green — remember him — coached that one for Salisbury.

• 17 straight against South Rowan. The Raiders’ most recent victory came in overtime in 2000. Rick Vanhoy was in the sixth year of his 11 at the helm of the Raiders.

• 11 straight against North Rowan . The Cavaliers’ most recent win was in 2001. Roger Secreast was in the last of his 14 seasons at North. That game was played shortly before West, coached by Scott Young, began its famous, 44-game county winning streak.

• 6 straight against Carson. The Cougars’ lone triumph over West occurred on Oct. 4, 2013. Pinyan, of course, coached the Cougars in that one after years of frustration against the Falcons while piloting Salisbury. If you’re a math major and wondering how West could own a six-game winning streak against a school it lost to in 2013, West went 2-0 (regular season and playoffs) against Carson in 2015.

• 4 straight against East Rowan. Coach Kenneth McClamrock’s Mustangs’ whomped West by 45 points in 2014. East, with Danny Misenheimer as head coach, also had the distinction of halting  West’s 44-game county winning streak in 2012 — on a tackle at the goal line by Dustin Mowery.

In addition to Salisbury, A.L. Brown is off this week. The Wonders will watch the Mooresville-Davie game with some interest because they’ve got both 4A schools on the schedule in September.

As far as last week’s picks, guest experts Marny Hendrick (4-1) and Scott Maddox (4-1) tied me. Even with three chances to get it right, we all missed on East Rowan vs. East Lincoln. It wasn’t all that close. East Lincoln won the third quarter 28-0 and took the game 41-20.

My picks — Cox Mill, North, East, Northwest, Davie. Obviously, I hope West proves me wrong, especially since I’ll be attending. But Cox Mill has a quarterback named Varney Farhnbullah, and I don’t know how you can pick against that.

As far as Mooresville vs. Davie, that’s a tough call. The other game I’ve got concerns about is North Rowan-Lexington. We’ve picked a team to win that has played eight quarters and has yet to score on offense.

Look for improvement from South defensively. That’s an easy prediction. There’s only one way to go after allowing 56 points to Carson two weeks ago.

East will be without Cooper Wright, which hinders the passing game, but Sammy Pinckney might rush for 200 yards behind a sturdy offensive line.

South has speedy skill people such as quarterback Drew Huffman and receiver Nathan Chrismon and should be able to produce some explosive plays.

South still leads the series 32-21 despite its recent struggles. South owns more wins against East than it does anyone.

North’s early offensive woes have been well-documented, but the defense is good and there’s plenty of time for the offense to get Malcolm Wilson untracked.

Lexington hired former Davie coach DeVore Holman as its new head coach in April. Lexington dropped a low-scoring game to Walkertown in its only outing.

North has won the last six meetings and 21 of the last 27, so you have to like the Cavaliers’ chances.

Twenty points should win this one.

One prediction guru gives Carson a 2 percent win probability. That might be generous.

That’s not meant to insult the Cougars, who were shut out by Salisbury last week, it’s just to stay that Northwest Cabarrus, ranked fourth in 3A and 15th in all classifications by MaxPreps, has a powerful team.

Northwest’s first two games have been 27-3 and 27-0 by halftime, and basically over.

Carson is going to fight, there’s no doubt about that, but it’s unlikely the Cougars can shock the world. Look for something in the 40-12 neighborhood.

Northwest leads the overall series 6-3. Carson’s most recent win over the Trojans was in 2015.

West was shut out by Mooresville, but got a lot better offensively in a 34-0 pounding of North Rowan in Week 2.

Cox Mill opened with a loss at Lake Norman, but beat Parkwood at home.

West is a sound team, capable of a winning season, but Cox Mill has explosive athletes on both sides of the ball.

This might be wild. So far, Davie has been the definition of wild.

Mooresville isn’t easy to figure. The Blue Devils’ defense stuffed West Rowan, but gave up 49 points a week later to West Forsyth.  West Forsyth might be a top-1o team in the state, but that  still doesn’t make a lot of sense.

Davie, with quarterback Nate Hampton and back Tate Carney putting up gargantuan numbers, has superior firepower. It has scored 70 points in two games, while Mooresville has managed 17.

When you throw in home-field advantage, you have to like Davie’s chances to be 3-0 when the smoke clears.