Be food safe and avoid getting sick 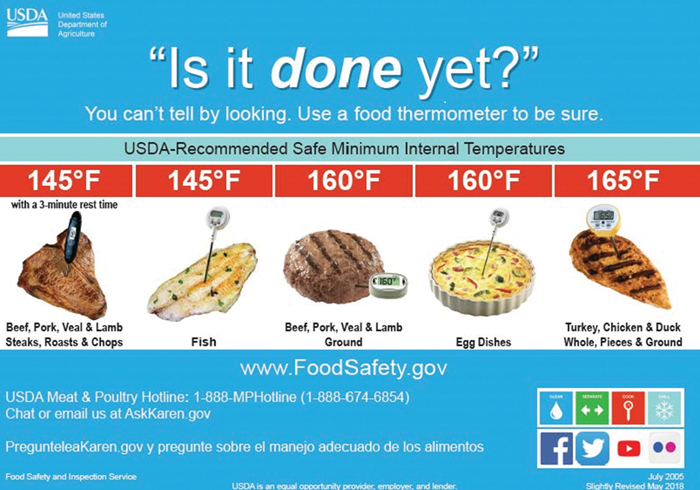 Practicing proper food safety is the single most important thing that can be done to reduce the number of foodborne illness cases reported yearly.

Every year, an estimated one in six Americans (48 million people) get sick, 128,000 are hospitalized, and 3,000 die from eating contaminated food. Anyone can get sick from a foodborne illness, which is often called food poisoning.

But there are some groups of people more likely to get sick and have a more serious illness. These groups are:

Children younger than 5 years old are at an increased risk for foodborne illness and related health complications because their immune systems are still developing. Young children with developing immune systems cannot fight off infections as well as adults can. In addition, young children produce less stomach acid that kills harmful bacteria, making it easier for them to get sick.

Food poisoning can be particularly dangerous for young children because food poisoning often causes vomiting or diarrhea or both. Since children’s bodies are small, they can quickly lose a lot of body fluid, causing dehydration.

Older adults have a higher risk because as people age, their immune systems and organs do not recognize and get rid of harmful germs as well as they once did.

All these things contribute to nearly half of people aged 65 and older who have a lab-confirmed foodborne illness from salmonella, campylobacter, listeria or E. coli being hospitalized.

A properly functioning immune system works to clear infections and other foreign agents from the body. People with weakened immune systems are more likely to have a lengthier illnesses, undergo hospitalization or even die should they get a foodborne illness. Those who are on dialysis are 50 times more likely to get a listeria infection.

The immune system changes in pregnant women which place them, their unborn children, and their newborns at increased risk of foodborne illness. These illnesses can be worse during pregnancy and may lead to miscarriage or premature delivery.

Some foodborne illnesses, such as listeria and toxoplasma gondii, can infect the fetus even if the mother does not feel sick. This is why doctors provide pregnant women with specific guidelines about foods that they should and should not eat. For a more detailed list of the guidelines, visit:  https://www.foodsafety.gov/people-at-risk/pregnant-women

There are things you can do to protect yourself and your family. As you prepare and handle food, follow these four steps:

Clean: Wash hands, utensils and surfaces often. Germs can spread and survive in many places.

Cook: Food is safely cooked only when the internal temperature is high enough to kill germs that can make you sick.

Join us in sharing information about the four steps to food safety. Let’s make sure everyone knows how to protect themselves and their loved ones from food poisoning.

For information about foodborne illness and fact sheet visit the Center for Disease Control website:  https://www.cdc.gov/features/food-safety-smarts/index.html

It’s Fair time — get your entry forms in…