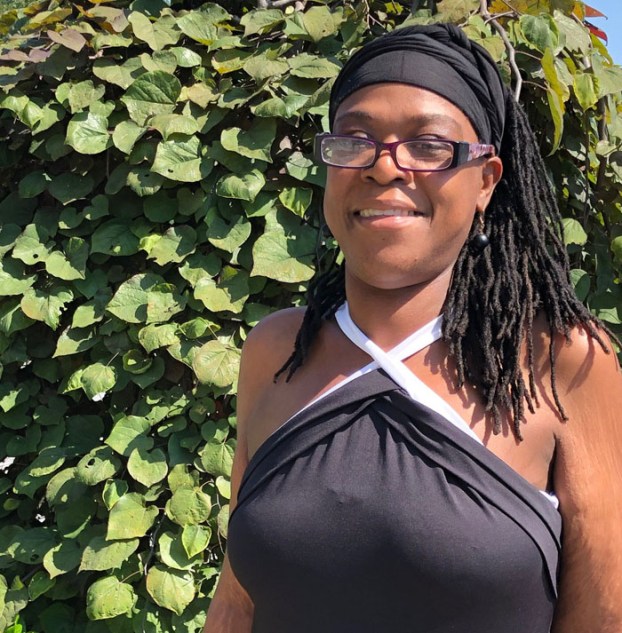 With the support of her husband and children, Najah Webb recently earned her high school equivalency diploma and is pursing a college degree. Maggie Blackwell/for the Salisbury Post

At 43, mom gets her GED, fulfills dreams of education

SALISBURY — Najah Webb, 43, has earned her GED and is working on an associate degree in business, thanks in part to encouragement from her husband, Marcus.

Webb worked at the Food Lion warehouse driving a palette jack until she had an accident and broke her ankle. She recuperated for a year, working to learn how to walk again.

Finally, she told Marcus she was going to school.

She drove to Rowan-Cabarrus Community College on Jan. 23, 2018, not even knowing if the school was open.

Webb was only 15 when she lost both parents, 10 months apart. Her dad, a Duke Energy employee, had been working toward his doctorate. He went to work one day in 1993 and died of a heart attack during a meeting.

Her mother, a longtime breast cancer patient, succumbed in 1994.

“My baby sister, Hana, needed me to care for her. It was a shock to be in the world by myself. I just let school go and started working and taking care of my sister.”

Webb smiles through tears as she remembers her parenting skills as a 15-year-old.

“I made sure she had every experience I missed: prom, graduation, everything.”

Today, Hana is a CPA in Texas. The sisters are still quite close.

After raising her sister, Webb says life took over. She married Marcus, and they have three children. Yet through all the ups and downs, Webb always took refuge in books, from romance  novels to history, even those by T.D. Jakes, the renown self-help author.

“She came in saying, ‘I don’t do math,’” Hartley says. “Then she jumped on board and gave it her all. She evolved into helping other students. That confidence just started building.”

Webb credits Hartley with much of her success in math.

“She gave us more than one way to attack a problem. That was helpful.

“Back in school, I wouldn’t ask a question because I didn’t want people to think I was dumb. As an adult, I’m just like, ‘I’m going to ask.’ It was different in Mrs. Mary Jane’s class. It was a different atmosphere. I got more comfortable being around her. She explained in a way that I could just open up.”

The GED program offers pre-testing for students to gauge when they’re ready for the final test in a subject. Webb says even though she passed the pre-test, she wanted to practice more.

Jay Taylor is executive director of college and career readiness at RCCC.

“I like the look on students’ faces when the practice test says they’re ready for testing. Their eyes open really wide,” Taylor says.

Webb took her final test for GED on Nov. 6. Her entire class walked her to the testing center and said a prayer for her.

“I’ll let you know if I passed,” she promised. “I called my husband, screaming, ‘I passed!’” she says with a smile.

With the momentum from passing her GED, Webb decided to continue her education.

“I told my husband I’m not going to stop. If I can do this, I can do college. He told me, ‘You go ahead so we can hang your degree on the wall.’”

Today Webb is in her third semester of a two-year business degree program. She’s on the Dean’s List and is on track to graduate in the spring. Webb and her husband aspire to open a business serving the everyday needs of veterans — meals, bathing and doctor appointments.

Webb thinks about what her parents might think of her success in education at this age.

“I’m sure they would both be happy. My daddy was a math geek himself. They would be proud that I’m moving and doing something different.”

Taylor and Hartley smile. “It’s an investment—” he says. She adds: “That no one can ever take away from you.”

The RCCC College and Career Readiness program offers students the chance to acquire a high school equivalency degree tuition free. The next orientation will be held the week of Oct. 1. T register, go to https://www.rccc.edu/precollege/hse-registration-form/.

SALISBURY — When a state court ruled Tuesday that legislative district maps were gerrymandered to give Republicans an advantage, it... read more