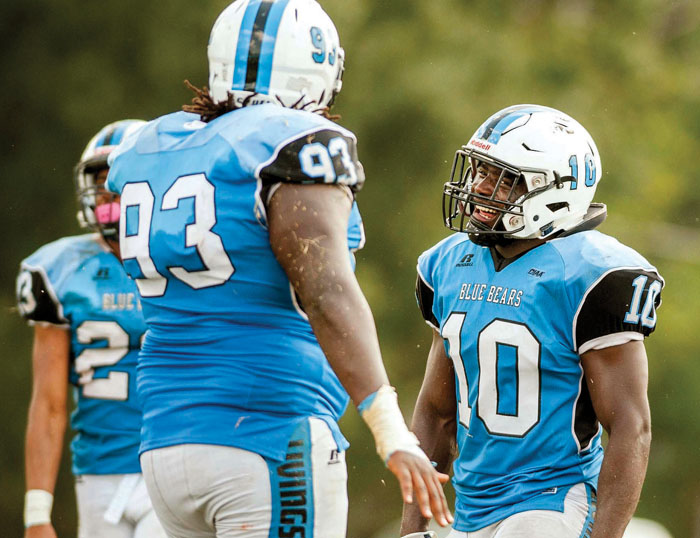 SALISBURY — With plenty of starters returning on both sides of the football, optimism abounds around Livingstone College as the Blue Bears travel to Atlanta for Saturday’s season-opener.

Livingstone will play Clark Atlanta University in a 7 p.m. contest, as both teams hope to improve on 2018’s three-win seasons.

“We’re injury free, which is really good, and we’re in better condition than we were a year ago at this time,” said Livingstone coach Daryl Williams on Tuesday. “We have an older football team this year, but not necessarily an experienced team. A Saturday night game on the road will be a tough challenge for our team, but I believe we’ll be ready.

“If we can limit turnovers, I like our chances,” continued Williams, beginning his seventh season at the helm. “No turnover is a good turnover, but when get into the red zone, we’ve got to make good decisions and get points, and on the other end, we can’t have turnovers that put our defense into bad situations early in games.”

Nine starters return on offense for the Blue Bears, led by sophomore quarterback Miles Hayes. Although Hayes missed four games due to an ankle injury, he started when healthy. In six games, Hayes complete 53 percent of his passes (91-of-173) for 11 touchdowns — and just five interceptions.

Hayes, from North Port, Fla., stands tall in the pocket at 6-3 and 220 — the same size as former LC quarterback Drew Powell. The record-setting Powell, a lefty, currently stars in the Indoor Football League for the Arizona Rattlers. Hayes is right-handed.

“We’re just looking for him to make smart decisions, be a leader and let him grow as an individual,” said Williams of Hayes. “We’re not trying to mold him into any quarterback that we’ve maybe had here in the past. He just needs to be himself.

“Miles had a good year as a freshman, when he was healthy,” continued Williams. “His touchdown-interception ratio was good and we want to see that completion percentage go from 53 percent to 65 to 70.”

Williams is also excited about the offensive line.

“Our offensive line was together in the spring and they’re all back, and that’s not always the case,” said Williams.

The Faraimo twins are now seniors and will set a lot of action — Andrew at running back, and Anthony at receiver. Freshman running back Dorian Edmond has turned heads during preseason camp. Senior Marquis Adams (6-1, 275) is the fullback.

Anthony Faraimo is the leading returning receiver, but 6-7 wide out Cory Hall is healthy and should be one of Hayes’ favorites targets. Hall saw action in just four games last season, due to injuries. Senior DeAndre Vickers also returns as a receiver, after catching 20 passes last season — three for TDs.

On defense, the Blue Bears lost four-year starter and All-CIAA performer Armond Cox, a defensive lineman who led the team in tackles last season. However, linebacker Raheem Coxfield (6-0, 220) and lineman Devonte Adams (6-3, 250), second and third on the tackle list, respectively, do return.

Also counted on for heavy duty are returning linebackers Juwan Funderburk (6-4, 185) and Ian Tyler, along with the bookends of the same last name — defensive linemen Deandre Moore (6-3, 310) and William Moore (6-3, 300).

Also back are two strong members of the secondary — safety Walter Watkins and cornerback Dominic Alexander. The two combined for five interceptions (three for Alexander) and Watkins was in the top 10 on the team in tackles with 26.

White said that Watkins is on some watch lists for postseason honors this year.

“Watkins is going into his third year and he’s been a catalyst for us and is a smart football player,” said Williams. “He understands the game and is a leader. He shows up everyday with his hard hat, ready to work.”

Livingstone also added some experience at safety in transfer Monte Seabrook. A Division I recruit out of Newberry (Florida) High School in 2014, Seabrook played one season at receiver at Utah, before transferring to Southeastern Louisiana. At 24 years old, Seabrook brings some maturity to the Blue Bears’ secondary.

“Seabrook is getting adjusted,” said Williams. “He could possibly play safety or corner, and that flexibility will be good for us.”

Freshman Raymond McGuire may earn a starting spot at the other cornerback position.

Williams said that Clark Atlanta returns starting quarterback Charles Stafford a 6-3, 220 pound senior, who passed for 167 yards per game last year. He threw 10 TDs and 11 interceptions, and also rushed for 390 yards on 87 carries. The Panthers graduated their leading rusher from 2018, senior running back Roger Thomas, who gained 833 yards.

The Panthers have a first-year coach in Tim Bowens, who coached running backs at Georgia State in 2018. He’s also assisted at South Alabama and Alabama-Birmingham. As a player, Bowens was a wide receiver at Alabama in 1996-99.

“We’re giving Clark Atlanta our upmost respect as their coaches will have them prepared,” added Williams. “They have people back on both offense and defense and their quarterback returns. We’ll have our work cut out for us and we’re not taking anything for granted. We’ve just got to trust our training and technique, and do what we’ve been doing throughout preseason camp.”