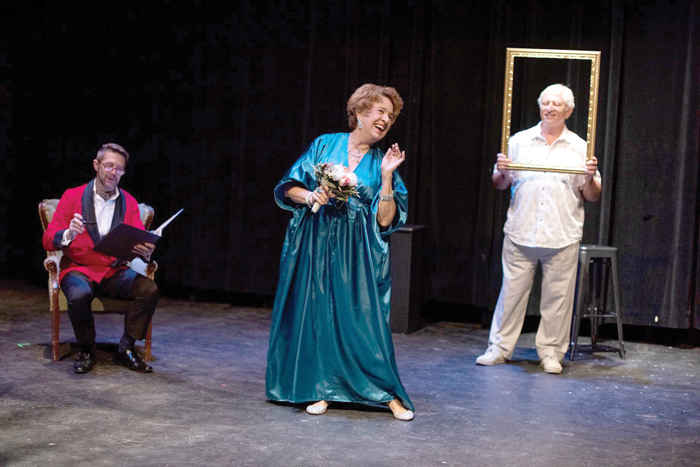 Photo by Tim Coffey From left, Rick Anderson as Narrator, Mary Ann McCubbin as Stepmother and Len Clark as The Mirror in 'Mirror, Mirror,' one of of the 10, 10-minute plays at Lee St. theatre this weekend.

You only have a few chances to see Lee Street theatre’s 2019 10-minute Play Festival. You should take advantage of it.

The twist this year is the plays were not written by local people but are part of various short play collections. There is one exception — Len Clark wrote and performed “The Night I Appeared as Macbeth,” a poem adapted from William Hargreaves. It’s loaded with Salisbury references and comes with a built-in heckler.

The rest of the plays make fun of fairy tales in one form or another, or Shakespeare, or happily ever after, in general.

Local talent directs and stars in the plays, so you’ll have fun laughing at them and laughing with them.

The first, “Mirror, Mirror,” is based on Cinderella and is directed by Cindi Graham. It stars Mary Ann McCubbin as the self-centered stepmother, Eliza Smith as her stepdaughter, Len Clark as the mirror with an attitude, Rick Anderson as the pipe-smoking dinner-jacketed narrator and Martin James as Prince Charming. The mirror steals the show, with his pointed commentary on who’s the fairest of them all, but McCubbin’s stepmother is lusciously vain.

“Clark and Bruce” stars veterans John Brincefield and Nick Bishop, as well as the up-and-coming Jess Johnson, who has impressed Lee Street audiences before. Directed by Mike Cline, this is the sad story of two retired superheroes, Superman and Batman, as they talk about the glory days and the ravages of age. Superman has lost his X-ray vision; Batman finds the women who go after Batman are a little disappointed to discover Bruce Wayne.

“The Wedding Story” is pointed and very funny, directed by Denise McKercher. Allison Proba is trying to tell kids a fairy tale, but her stand-in wedding couple keeps interrupting her. Skyler Sanders and Jojo Allen talk about the funny truths of their wedding. It was in a Las Vegas wedding chapel, not a grand church. The reception was in the back of the Starlight Lounge, not a quaint Vermont inn. The couple and the reader battle back and forth to take control of the story. When the reader gives in and talks about reality, the couple’s outrage and discomfort make for one of those fractured fairy tales.

In the second half, there will be another — “Cindy & Julie,” as Cinderella Charming, played by Kat Brown, and Juliet Montague, played by Eliza Smith, meet in a therapist’s office. Directed by Beth Bentley, the princesses talk about their disappointments with Prince Charming and Romeo. Prince Charming has an odd fetish, and Romeo is just that — a Romeo.

“The Interview” is a 10-minute play that makes you go, “Hmmm.” Is it real or is it training? A leopard-skin-clad interviewer, Theresa Brandt, puts interviewee Marcus Cadet through hell from the minute he sits down. The more we learn about her and her job, the more suspicious it gets. The Interviewee finally calls it what it is, but then waffles, and so will you. This one is directed by Charles Karvon.

We go back to a classic with “Dating Hamlet,” directed by Caroline Stephenson and starring Jess Johnson, alone, as Ophelia, who’s so excited about Hamlet. She likes deep thinkers, but she’s so over this revenge-for-his-father bit. And isn’t it kind of gross that Hamlet’s stepfather is his uncle and that makes his mother her own sister-in-law? Johnson carries it off with aplomb, blissfully unaware of her fate.

“Oklahoma in 10 Minutes” is a whirlwind with two actors, Lee Street’s executive director, Rod Oden, and Charles Karvon doing all the parts from the classic musical, minus the songs, “I ain’t got time for that.” Caroline Stephenson directed this one, too. If you’re not familiar with “Oklahoma,” you might get a bit lost because it all goes by so fast. Just know there’s a good guy, a bad guy, a pretty young woman, a wise old aunt and, well, a few more characters.

Claudia Galup directed the funny, ghoulish “Blood Pudding,” a take on what it means to be a vampire. Matt Spry plays Barry, who wants to marry Lucinda, played by Addison Bevis. Tonight, he gets to meet the parents, Mary Ann McCubbin and Len Clark. They need to talk about who a vampire is. Listen to what they order for dinner. It’s mostly raw meat. McCubbin, of course, is charming and lovely in her black lace. Clark is charming, disarming and direct. Turn into bats? Pfft. No sun? Use lots of sunscreen and wear hats.  But … Barry has other concerns.

It all wraps up with “The Chocolate Affair,” directed by Matthew Monte and starring Eliza Smith, the seductive Mason Livers and Kat Brown. It’s all about obsession, really. Chocolate obsession, and what that means about our hidden disappointments and desires.

With one 15-minute intermission, the evening will move along quickly, no heavy thinking required. Some of the material is OK for children, but some is a bit raw, when discussing relationships, and there’s language. It’s a lot of laughs for adults.

This is part of the Spotlight Series at Lee Street, offering something a little different throughout the year.