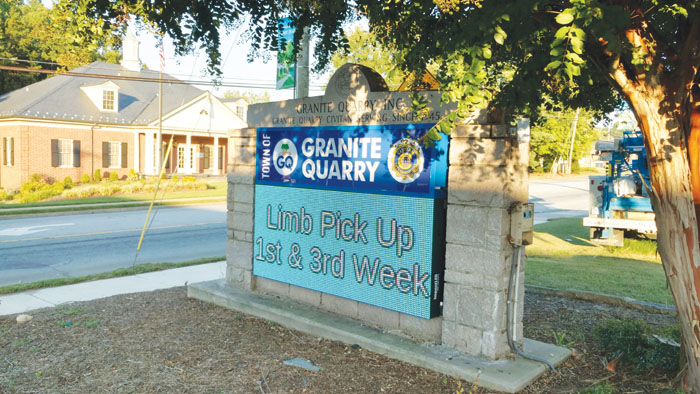 The town of Granite Quarry's new digital message sign at Town Hall is up and running with messages to residents. The messages change at regular intervals. Mark Wineka/Salisbury Post

GRANITE QUARRY — By a 3-2 vote Tuesday, the Granite Quarry Board of Aldermen decided against hiring a landscape architect to design a plan for the intersection of Salisbury Avenue (U.S. 52) and Bank Street.

Granite Quarry residents sometimes refer to the intersection, which has a traffic light, as the town square.

Mayor Pro Tem Jim LaFevers and Alderman John Linker had voted for a motion to hire landscape architect Lynn Raker, a former senior planner with the city of Salisbury.

Aldermen Jim Costantino and Kim Cress voted against the motion, and Mayor Bill Feather ultimately broke the tie, siding with Cress and Costantino.

The Downtown Revitalization Committee had recommended that Raker be hired for an amount not to exceed $3,500.

Doug Shelton, chairman of the committee, told the aldermen that Raker has experience with town squares, and the committee wanted her professional expertise in outlining what could or could not be done within the site’s constraints.

The $3,500 was not meant to fund the project, only to come up with a design that would work, Shelton said.

“A lot of us (on the committee) have a lot of ideas, but we wanted to retain a professional,” he said.

Shelton said it would have been emphasized to Raker that the project would have to be affordable.

Raker has done extensive work with the city of Salisbury, surrounding municipalities and the N.C. Department of Transportation.

As part of her proposal, Raker wrote the town would receive “a color-rendered concept for aesthetic improvements at the square, as well as recommendations for crosswalks and sidewalk alignment extending up to 400 feet from the square.”

Her proposal added the design would provide enough detail “to allow you to request estimates for costs of construction.”

Cress asked whether Raker would be taking into account utility pole removal at the intersection and a resurfacing of U.S. 52 that’s planned for next year.

He also expressed concern about ownership and access issues at the intersection and who actually controls, for example, the land under where planters now sit.

Cress said he would rather see $3,500 go toward the final landscaping project, whatever it turns out to be. He added, “I also find it hard to believe we can’t find someone in Rowan County” to do the design, not someone from Asheville.

LaFevers said it’s time to do something, and “we have a group of people who have come up with a plan.”

Costantino asked where the money for Raker’s services would come from. Interim Town Manager Larry Smith said funds would be allocated from the administration department’s “special services” account.

In breaking the tie and voting against hiring Raker, Feather said his question has always been whether the town has the money to redo the square after it approves a design.

And if the town were looking to accomplish a redesign at the square in next year’s budget, Feather said, he would rather delay a decision on hiring a landscape architect until after the November municipal election.

Feather described a situation in which the town might have Raker’s design but a new board that would not support the plan. The mayor suggested putting the landscape architect question back on the agenda in January or February after a new board is in place.

In another matter Tuesday, the aldermen approved an ordinance establishing a moratorium on sweepstakes cafes or their expansion in Granite Quarry.

The ordinance noted that the town “and many other communities are experiencing an influx of internet cafes/internet sweepstakes operations” and that town guidelines have no definitions for these businesses.

The moratorium is for 60 days. In recent weeks, a conditional-use permit was requested for an arcade or electronic gaming business behind M&K Barbecue.

Mike Brinkley, a former alderman and a 2019 town board candidate, sent a letter to the board asking it to examine changes made to development ordinance in 2016 and 2018, as it pertains to electronic gaming.

Brinkley’s letter also urged the board to review the subdivision ordinance to ensure that residents can be made more aware of proposed changes in their neighborhoods.

This has become an issue lately with a proposed subdivision at Yadkin and Kern streets. Numerous neighboring property owners have expressed opposition.

Shelton, another town board candidate, also spoke during the public-comment period about his concerns related to the gaming business and the Yadkin Street subdivision, among other things.

“The problem is the town is doing damage control after the fact,” Shelton said.

In other business, theh aldermen:

• Took no action on a request from Salisbury Christian School to have the old Town Hall sign for its use. Smith reported the town has had more than one request for the changeable-letters sign, which has been replaced by a new $25,000 digital message model.

• Took no action on a donation request from One Church One Child Ministry, which seeks to improve the lives of Rowan County children, teenagers and birth parents who receive child protective or foster care services from the Rowan County Department of Social Services.

Board members noted there was nothing in the budget specifically for this request.

• Agreed to donate $100 toward the Granite Quarry Fiddlers Convention, taking the form of an advertisement sponsorship, as it has in years past.