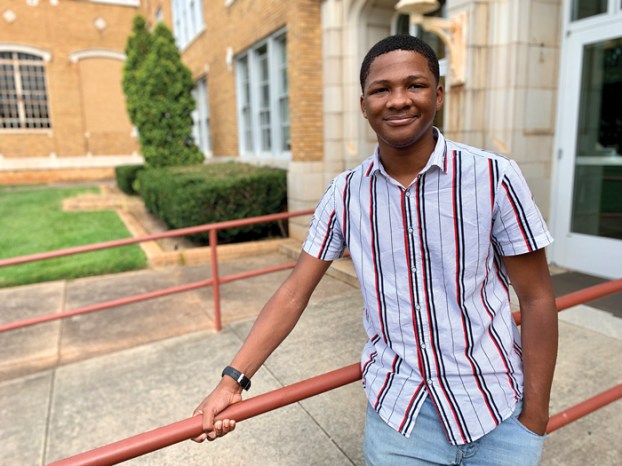 Submitted photo One of 116 Rowan-Salisbury high school students sent to the Broyhill Leadership Camp through Salisbury Academy scholarships over the past nine years, Isaiah Woods smiles on the steps of Salisbury High School.

SALISBURY – Isaiah Woods is a man of impact on a journey in which his leadership skills are opening doors of opportunity.

One of 116 Rowan-Salisbury high school students sent to the Broyhill Leadership Program over the past nine years on scholarships provided by Salisbury Academy, Isaiah says his experience at the three-day leadership camp was a key moment – and an unforgettable launch point – in his journey.

“Hope. It’s as simple as that,” says Isaiah. “The Broyhill program offers hope and faith that you can venture out and find opportunity.”

Having completed the program in 2017 when he was a rising sophomore at Salisbury High School, Isaiah is now in the 12th grade and reflects on the impact the Broyhill experience has had over the past two years of his high school career.

The conference exposed Isaiah to college life at Wingate University – staying in a dorm room, living with a roommate, walking to class – and taught leadership, college readiness, professionalism, and embracing what makes each of us unique, Isaiah says.

“The connections that I’ve made and the networks that I’ve formed have lasted,” he says, adding that he is still in contact with students from across North Carolina and South Carolina as well as with key leaders of the Broyhill program.

A passionate public speaker, Isaiah connected with Broyhill founder Michael Broome at the conference. Two years later, Broome is still an influential mentor for Isaiah and his public speaking development.

“Founding the Broyhill program has been a great joy, and it’s been a wonderful experience to continue relationships with these special folks like Isaiah,” said Broome.

After returning from the conference, Isaiah says Broyhill motivated him to pursue other opportunities for personal and community advancement.

“The Broyhill program opened the gates to an incredible journey,” says Isaiah, who went on to attend Boys State for local and federal government exposure two summers ago and two programs this past summer: a world affairs program as well as the Harvard University Summer School. 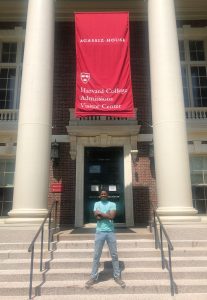 Submitted photo Isaiah Woods says his Broyhill experience motivated him to pursue other opportunities for personal and community advancement such as the Harvard University Summer School that he attended this past summer.

Broyhill also equipped Isaiah to be a successful leader and inspire leadership in others through the Men of IMPACT (Inspiring Males and Promoting Achievement, Character, and Trust) Brotherhood of Salisbury High School, he says. In the club, Isaiah works with members of school leadership to teach young men many of the key life skills not taught in the classroom, from how to present yourself in an interview, to table manners, to how to read a W2 form.

“Through Broyhill, I’ve learned how we can all lead together in IMPACT and elevate the experience for everyone.”

After high school, Isaiah plans to attend one of his top-pick colleges such as Stanford, Cornell, Yale, Harvard or Howard. He will pursue degrees in political science and pre-law. From there, Isaiah may consider law school as a next step, he says.

Upon completing his education, Isaiah is called to bettering the community, he says.

“Ultimately, I want to work in the community. I know how tough it is for kids like me and I don’t want other kids to struggle as much as I did in finding opportunities and sponsorships,” says Isaiah.

“I want to level the playing field and be sure that there isn’t just one student doing these great things behind the curtains of Salisbury High School.”

Guidance counselor Tangela Morgan of Salisbury High School says the Broyhill opportunity is a beautiful cultivation of student leaders and a sign of Salisbury Academy’s commitment to the growth and development of Rowan County.

“Kids like me coming from low-income families can do great things. When these doors open up, we are in a position to maneuver where we want to go,” says Isaiah.

“Salisbury Academy gave me more than money for a program. They gave me self-belief that I could apply for these things and have these kinds of opportunities.”

For LifeWay Church members, patience leads to their new place of worship

SALISBURY — Back in June, when members of LifeWay Church held the first service in their new building, Pastor Danny... read more