The above chart shows recent school performance grades and scores that determined those grades in the Rowan-Salisbury School System. Andy Mooney / Salisbury Post

The state on Wednesday released School Performance Grades and numeric scores on the proficiency of schools across the state. The scores, on a scale from zero to 100, are based mostly on standardized test results, with just 20% based on growth. And Rowan-Salisbury’s results showed a net decline, though a small one, with Moody saying scores dropped by 1.2% when averaged across all grades.

“I think these scores almost prove my point exactly,” Moody told the Post. “It’s an ordering and sorting of economic status. Last year, we told our teachers not to be focused on these tests, and our test scores remained fairly flat.”

Children from higher-income homes have more opportunities to learn and apply their knowledge, she said.

The opposite is true for children in low-income homes, Moody said. They may face obstacles to learning such as abuse or health problems, too. In nearly every instance, students labeled “economically disadvantaged” fared worse on school performance grades than their peers. That fact is particularly relevant in Rowan County, where 15.3% of people live in poverty, according to the U.S. Census. 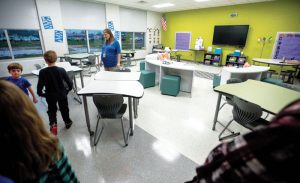 West Rowan Middle was the lone school to improve its letter grade from one year ago — from F to D. It also improved its school performance score from 39 to 51. That’s even better than two years ago, when the school also received a D rating but had a score of 43.

A majority of schools in the district kept the same letter grade from the prior year, with two staying at a B grade, 12 at a C, eight at a D and four at F.

Meanwhile, 14 schools in RSS, including West Rowan Middle, showed improvement in performance scores, even if by just one point. Another 14 showed a decline. Five received the same score as the prior year.

The 2018-19 school year is the first in which data was available for West Rowan Elementary School, which received a grade of C. That’s the same grade the schools that fed into West Rowan — Cleveland and Woodleaf elementary schools — received on year prior. 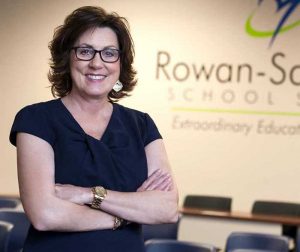 Moody said she hopes the just-released scores won’t “take the wind out of the sails” of RSS teachers, who she said were energized by the freedom of the system’s “renewal” status. That status provides a wide range of flexibility for the district and individual schools, ranging from curriculum to the budget.

“I hope it won’t do that because we’re working very hard on a new directional system, with true accounting and true reporting on what is really happening inside of our buildings,” Moody said.

An alternate accountability model — something by which student and school performance can be judged — was not ready at the time of the School Performance Grades release on Wednesday — something Moody called awkward. But Moody said the model would be ready for presentation to school board members in October, with principals likely receiving a “framework” of that model this month.

The model, Moody said, will focus on RSS’ “directional system,” which picks three areas that help engage students. Aptly named, it’s intended to set the direction of the school system, and the three areas are academic skills, unique life goals and interpersonal skills.

Moody said academic accountability in the new model would include some sort of standardized test, but it would also include specific evidence of work and a means by which the teacher’s opinion can be included, too.

For unique life skills, Moody said, RSS will focus on whether students are enrolled in college, enlisted in the military or employed after graduation. Because that’s not applicable to middle and elementary schools, Moody said RSS will seek to ensure students are on track to do one of those things.

Scores may increase or slightly decline from year to year, but there won’t be broad, sweeping changes, Moody said. 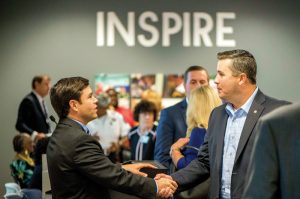 In a news release on Wednesday, the N.C. Department of Public Instruction touted that nearly 75 percent of schools met or exceeded growth goals in the 2018-19 year. That’s a number of which Rowan-Salisbury Schools fell short, with 54% of schools meeting or exceeding growth targets.

Across the state, the percentage of schools earning As and Bs also ticked up slightly — from 35.6% to 37.3%

“Teachers across the state are working hard to ensure that students learn and achieve,” Johnson said. “We are making changes in Raleigh to help our students and teachers – with less time spent on testing and more time for instruction, getting money out of Raleigh and into classrooms where it belongs, and a regional support system better tailored to support schools.”

Kannapolis and other schools

To the south, in Kannapolis City Schools, there were academic gains for the second year in a row.

“I’m proud of the progress we’re making with our students.” said KCS superintendent Chip Buckwell in a news release. “We’re showing consistent growth and making steady gains in achievement. We still have more progress to make, and we’re not where we want to be yet, but we’re doing the right things to raise achievement and help our kids succeed. With the educators and programs we have in place, I know we’ll continue to see even more improvement.”

But Buckwell also sung a similar tune as Moody, saying that economic status is what’s truly measured by standardized tests.

“The student performance that are on these grades here don’t reflect all the good work that’s going on, credentialing and all the other things,” Buckwell said. “The poverty rate of a school is a direct predictor of how well you will do.”

He said students in Kannapolis City Schools graduated with a total of 300 credentials — certifications for individual professions — just three years ago. Just last school year, there were 1,400 credentials issued to students.

“They can walk out of the building with that in hand and go to get work,” he said.

Only one school in the KCS system received a lower letter grade in the 2018-19 results — Woodrow Wilson Elementary, going from C to D — and three schools saw declines in school performance scores — Woodrow Wilson, from 61 to 54; Kannapolis Middle, from 53 to 50; and Jackson Park Elementary, from 63 to 59.

Gray Stone Day School, located in Misenheimer, received a score of A and a school performance grade of 86, a sharp improvement from its B grade and rating of 74 from a year ago.

Essie Mae Kiser Foxx Charter School in East Spencer received a grade of F and a school performance grade of 22.

City will apply for grants, seek software to improve…