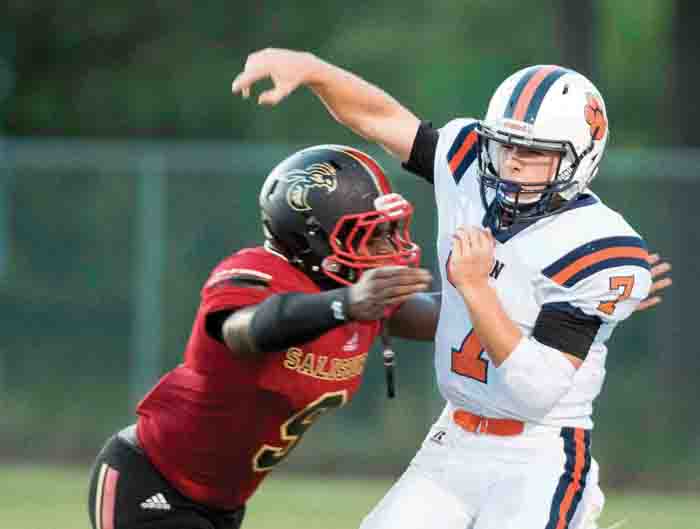 Salisbury defensive lineman Isaiah “Zae” Clay played only 37 snaps in Friday’s 26-0 win against Carson, but he made something positive happen for the Hornets on almost half of them.

The junior (5-11, 225) accumulated 11.5 tackles, with 3.5 sacks and another tackle for loss on a run. Providing a powerful push up the middle and using his hands skillfully, he accounted for six quarterback pressures.

“That’s tremendous production from a defensive lineman,” Salisbury head coach Brian Hinson said. “A lot of times linemen do their jobs and linebackers are free to make the tackles, but Zay had one of those huge stat games.”

Clay has been a varsity starter since his freshman season and was all-county and All-Central Carolina Conference as a sophomore nose guard. The Hornets experimented with moving him to defensive end this year, but now they’ve shifted him back inside as an upfront anchor in a 4-2-5 alignment.

The Hornets’ defense has been nothing short of devastating in the first two weeks. Salisbury held North Rowan without an offensive score in a 9-7 victory and smothered Carson’s offense on Friday, holding the Cougars to under 100 yards of offense. Carson had 18 first downs and 56 points in its opener, but managed just six first downs against the Hornets.

“We listened to our coaches and went out and played our assignments,” Clay said. “Everyone on the defense did their jobs very well. We kept the energy up all night, and as long as we do that, we’ll be straight.”

Salisbury’s focus going into the game was containing Carson running back Hunter Courtney, who set a school record with 346 rushing yards on opening night and challenged the county record.

“We did a good job of staying in our gaps and controlling things at the line of scrimmage,” Hinson said. “Carson did throw the ball pretty well early, but then we were able to start bringing more pressure. With his speed and his get-off and the strength he’s added with a lot of the work in the weight room, Clay usually has a mismatch inside, and he had a big night.”

Clay said the plays that stood out for him most on Friday were shared sacks with Jabril Norman and Blaine Shellhorn. Nothing is more fun than two hard-working guy getting to the quarterback.

“We’re just having fun playing football,” Clay said. “When you do your jobs like we’re doing them right now, football is a lot of fun.”

The Hornets didn’t have a shutout in 2018. The Hornets hadn’t kept an opponent off the scoreboard since the middle of the 2017 season when they wiped out Central Davidson 58-0.

The modern defensive standard at Salisbury was set a generation ago, by the powerful 1995 club that posted seven shutouts and allowed just 71 points in 13 games (5.46 points per game). That team won a first-round playoff game 64-0.

Maybe the Hornets will put up similar numbers this season. If they do, Clay will be a major part of it.

“He’s a really good player and he’s got one of the best smiles on the team,” Hinson said. “He’s got a whole lot of football ahead of him.”

“And our offensive line made a lot of progress from Week 1 to Week 2,” Hinson said.

Off this week, Salisbury returns to action against Thomasville (1-1) to start a string of nine straight CCC games.

Defensive back TK Lark, a three-year starter, played every snap on defense and special teams  for West (1-1) in a 34-0 victory against North Rowan.

“Opponents don’t usually test Lark very much through the air,” West head coach Joe Nixon said. “He made some good tackles coming up against running plays.”

West’s whole defensive front earned praise from Nixon after the shutout of North, as did safeties Reggie Everhart and Jason Artis.

“Malcolm Wilson is a really good back, but we did a good job of keeping him between the tackles,” Nixon said.

After being shut down on opening night by Mooresville, West’s running game made serious strides from Week 1 to Week 2. The line and the receivers blocked better, and backs Cayleb Brawley and Michael Gonsalves turned in strong games.

“Our receivers did a good job of putting the team out in front of their own stats,” Nixon said.

Now his senior football season might be over as well.

Wright sustained another collarbone injury in Friday’s 41-20 loss to East Lincoln, and surgery was scheduled.

It was a tough break for Wright and the Mustangs. The sprinter — he’s the reigning Rowan County and North Piedmont Conference champ in the  400 meters — got off to a terrific start in the opening night win against North Stanly with two touchdown receptions.

It’s like losing two people for the Mustangs, as Wright was also an important player in the defensive secondary.

“We can’t really replace him, at least not with one person,” East head coach John Fitz said. “But we have guys like Vincent Jones and Isaac Hinceman that will have to step up.”

Coming off a disappointing loss at home, East (1-1) plays at South Rowan on Friday.

While it’s a series the Mustangs have dominated recently — winning eight of the last nine — South controlled the series from 1971-2009 and still holds a 32-21 all-time advantage.

Sammy Pinckney was held to 75 rushing yards by East Lincoln, but is second in the county with 222 rushing yards.

Tahj Young has intercepted a pass in both games and leads the county.

South (0-1) had last week off to regroup after taking a 56-20 pounding from Carson on opening night.

“We spent last week and this one correcting our mistakes and preparing for East,” South head coach Daniel Yow said. “We look to have  a much better showing than we did two weeks ago against Carson.”

South has won more varsity football games against East (32) than any other school. It’s really not close. Next on the list are West Rowan and Northwest Cabarrus, schools South has beaten 21 times each.

South opened in 1961, three years later than East, but still holds a narrow lead in all-time victories. South has won 271 games, while East has won 267.

South quarterback Drew Huffman surpassed 2,000 yards of total offense for his career in the Raiders’ opener. Huffman has 1, 412 passing yards and 610 rushing yards.

North Rowan’s new quarterback Kyree Sims has some talent.  He can run and throw.

Still North (0-2) has failed to score an offensive touchdown in its first two games against two stout defenses. A 9-7 loss to Salisbury was followed by last Friday’s 34-0 shellacking by West Rowan.

“Two weeks in a row Kyree has done a lot of growing up in the second half,” North head coach Ben Hampton said. “But we’ve got to get him to where he’s playing well for 48 minutes, not 24.”

North back Malcolm Wilson hasn’t gotten untracked yet. He has 63 rushing yards and 32 receiving yards in two games. That was a decent half for him in 2018.

Wilson finally appeared to have a breakthrough run against West on Friday, flowing right and then finding a cutback lane to his left. He rolled for about 40 yards, but a flag a yard deep in the North backfield brought the play back.

Wilson looks healthy, so his numbers should accelerate quickly once North’s offensive line starts to gel. He hasn’t had any daylight to run to. Last season, he averaged 9 yards per carry. Right now, he’s under 2.

“We’ve got a great back in Malcolm,” Hampton said. “We’ve got to be able to use him.”

Roger Secreast, who was 108-59 in 14 seasons as North’s head coach, attended Friday’s game.

North has’t won yet this season, but the school’s 400th all-time victory should arrive at some point. The Cavaliers are 396-280-10 all-time.

The Cavaliers play at Lexington on Friday. They have won 21 of their last 27 meetings with the Yellow Jackets.

Carson’s offense is averaging a strange 28 points per game — 56 in the opener, zero in last Friday’s 26-0 loss to Salisbury. Carson has tied the school records for most points and fewest points in back-to-back weeks.

The Cougars didn’t turn it over, they just couldn’t move the ball very consistently.

Carson faces a tough opponent on Friday when it hosts Northwest Cabarrus. Carson is 3-6 all-time against the Trojans, who are about as good as they’ve ever been and are ranked fourth in 3A by MaxPreps.

“It doesn’t get any easier for us, but we’re just focusing on the Cougars this week,” Crosby said. “We have to get better regardless of who we’re playing.”

Davie has posted 10 sacks in wild triumphs against Page and North Davidson. Nine different War Eagles have contributed at least half a sack.

Davie has allowed 400-plus passing yards in back-to-back weeks, but still managed to win both games.

Next for Davie is a Mooresville team that prefers to move on the ground. Davie has allowed just 89 rushing yards in two games.

Jakhiry Bennett didn’t carry the ball until the second quarter, but he finished with 18 carries for 175 yards and two touchdowns to lead A.L. Brown’s offense in a 28-6 win against Ashbrook.

Two-way lineman Xavier Jordan made two fumble recoveries against Ashbrook, including the game-turner.

The Wonders (1-0), who are playing only 10 regular-season games, are off Friday for the second time in three weeks. They’ll host Mooresville in a big one on Sept. 13.