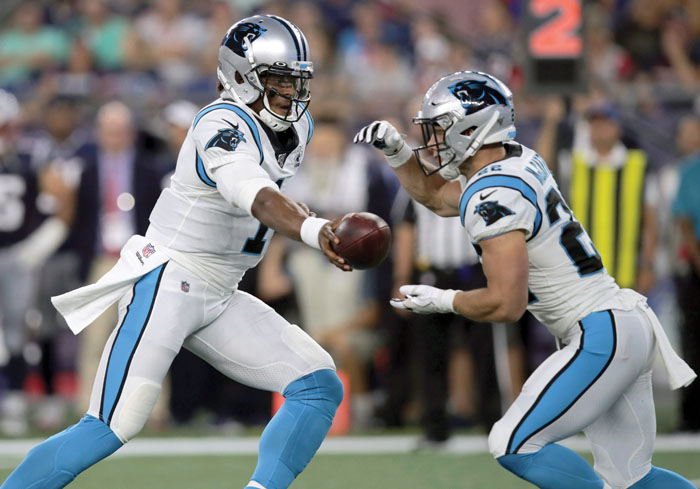 With a nagging shoulder injury seemingly behind him, three young children at home and a new lifestyle as a vegetarian, the Panthers 30-year-old quarterback seems to be taking a step back in order to move forward.

“I feel like a rookie again,” Newton said Wednesday as the Panthers continued preparations for Sunday’s home opener against the Los Angeles Rams. “I’m having fun. I am feeling good and the thrill is still there. I am blessed. Sometimes you need to put things into perspective.”

Newton won national championships while at Blinn Junior College and Auburn. He won the Heisman Trophy after one of the most impressive seasons ever put together by a college quarterback.

So when he was selected No. 1 overall in the 2011 draft by the Panthers the clear expectation was he’d deliver the franchise its first Super Bowl championship.

Newton got the Panthers close in 2015, but Denver’s defense led by Von Miller grounded Carolina’s high-flying offense in Super Bowl 50. The Panthers haven’t won a playoff game since, in part because of Newton’s struggles with right shoulder problems that began late in the 2016 season.

Seemingly more laid back than in the past, he’s taking a one-game-at-a-time approach to this season.

“I could care less about the Super Bowl,” Newton said. “… I just want to be 1-0 seeing my kids after the game.”

Newton said he is not taking for granted how fortunate he is to be able to play for the same NFL team for nearly a decade.

It something that comes from regular talks with his older brother.

Cecil Newton was an offensive lineman who spent four years bouncing back and forth between various NFL practice squads but never played a down in a regular season game. This past weekend’s roster cut down to 53 players reminded Newton of what his brother has been talking to him about.

“Just two or three days ago grown men cried because they were unexpectedly cut, released, traded or whatever,” Newton said. “I’m just lucky to be a part of fan base for this same nine years. A lot of people can’t say the same thing… Every time a person sees me play, talk or whatever, I want them to see the joy as if it is day one.”

Newton was not on the team’s first injury report of the season Wednesday despite suffering a left mid-foot sprain in the third preseason game against the Patriots. He insists his decision to become a vegan earlier this year — after years as a pescatarian — and eating right is helping his body recover faster from injuries.

Panthers coach Ron Rivera said Newton is in great shape and that “he’s mentally where he needs to be (and) he’s throwing well.”

Rams coach Sean McVay said a healthy Newton is a “nightmare” to prepare for because he can do so many things other QBs can’t.

Newton is one of only three quarterbacks in NFL history to amass more than 33,000 yards from scrimmage in his first eight seasons. He’s thrown for more than 3,000 yards in every season, and has run for more touchdowns than any QB in league history.

The 2015 league MVP is feeling good about this upcoming season.

He has an offense around him that includes the versatile Christian McCaffrey at running back, reliable tight end Greg Olsen and plenty of speed at wide receiver with D.J. Moore and Curtis Samuel. With that firepower, Newton knows the Panthers have a chance to be one of the most potent offenses in the league — and be a postseason threat.