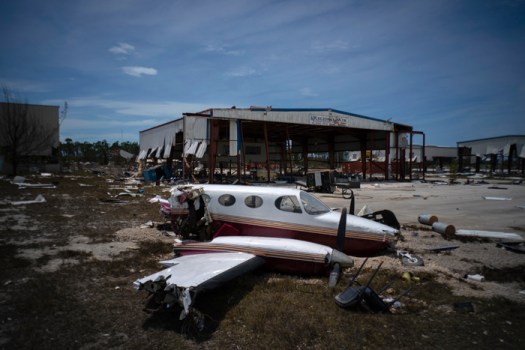 A plane destroyed by Hurricane Dorian sits amid debris at the airport in Freeport, Bahamas. Ramon Espinosa/Associated Press 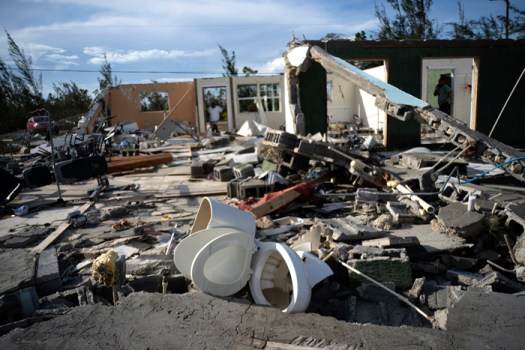 A toilet sits in the debris of George Bolter's home destroyed by Hurricane Dorian in the Pine Bay neighborhood of Freeport, Bahamas. Ramon Espinosa/Associated Press 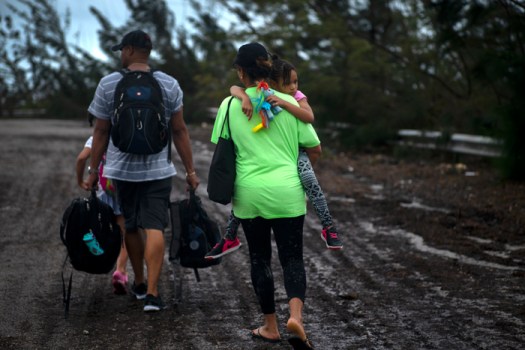 A family walks on a road after being rescued from the floodwaters of Hurricane Dorian, near Freeport, Grand Bahama, Bahamas, on Tuesday. They were rescued by volunteers who drove a bus into the floodwaters to pick them up. Ramon Espinosa/Associated Press 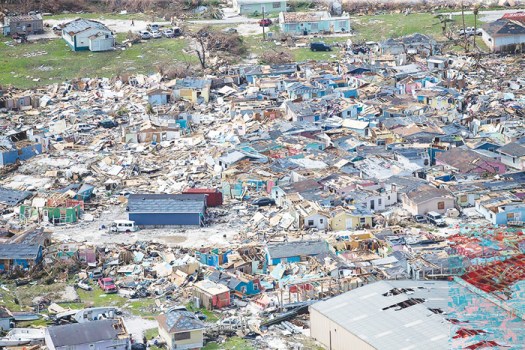 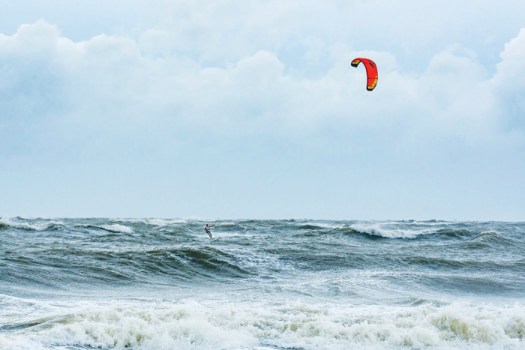 As Hurricane Dorian approaches Tybee Island on Wednesday, a kiteboarder takes advantage of the large waves generated by the storm. Casey Jones/Savannah Morning News via AP 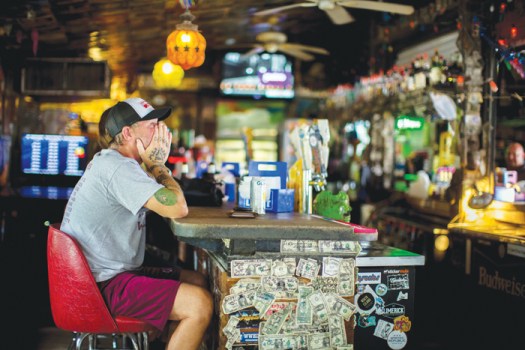 Andrew Parker watches the latest on Hurricane Dorian from the bar at Huc-A-Poos pizza restaurant Wednesday in Tybee Island, Ga. Parker said he's been through eight hurricanes in his lifetime as a resident of Tybee. And like the others Parker said he plans on riding Dorian out at his home. Stephen B. Morton/Associated Press

FREEPORT, Bahamas — The ground crunched under Greg Alem’s feet on Wednesday as he walked over the ruins of his home, laid waste by Hurricane Dorian. He touched a splintered beam of wood and pointed to the fallen trees, overcome by memories.

“We planted those trees ourselves. Everything has a memory, you know,” he said. “It’s so, so sad. … In the Bible there is a person called Job, and I feel like Job right now. He’s lost everything, but his faith kept him strong.”

The devastation wrought by Dorian — and the terror it inflicted during its day-and-a-half mauling of the Bahamas — came into focus Wednesday as the passing of the storm revealed a muddy, debris-strewn landscape of smashed and flooded-out homes on Abaco and Grand Bahama islands. The official death toll from the strongest hurricane on record ever to hit the country jumped to 20, and there was little doubt it would climb higher.

With a now-distant Dorian pushing its way up the Southeastern U.S. coast, menacing Georgia and the Carolinas, many people living in the Bahamas were in shock as they slowly came out of shelters and checked on their homes.

In one community, George Bolter stood in the bright sunshine and surveyed the ruins of what was once his home. He picked at the debris, trying to find something, anything, salvageable. A couple of walls were the only thing left.

The Bahamian government sent hundreds of police officers and marines into the stricken islands, along with doctors, nurses and other health care workers, in an effort to reach drenched and stunned victims and take the full measure of the disaster.

“There are many in Grand Bahama who are suffering,” Prime Minister Hubert Minnis said at a news conference. “We know there are many Bahamians that are in need of help. I want to assure you that more help is on the way.”

He thanked the international community for its response, especially the U.S. government for what he called “exceptional assistance.”

The U.S. Coast Guard, Britain’s Royal Navy and relief organizations including the United Nations and the Red Cross joined the burgeoning effort to rush food and medicine to survivors and lift the most desperate people to safety by helicopter. The U.S. government also dispatched urban search-and-rescue teams.

Londa Sawyer stepped off a helicopter in Nassau, the capital, with her two children and two dogs after being rescued from Marsh Harbor in the Abaco islands.

Sawyer said that her home was completely flooded and that she and her family fled to a friend’s home, where the water came up to the second floor and carried them up to within a few feet of the roof. She said she and her children and the dogs were floating on a mattress for about half an hour until the water began receding.

Sandra Cooke, who lives in Nassau, said her sister-in-law was trapped under her roof for 17 hours in the Abaco islands and wrapped herself in a shower curtain as she waited.

“The dog laid on top of her to keep her warm until the neighbors could come to help,” she said. “All of my family lives in Marsh Harbor, and everybody lost everything. Not one of them have a home to live anymore.”

The storm pounded the Bahamas with Category 5 winds up to 185 mph and torrential rains, swamping neighborhoods in brown floodwaters and destroying or severely damaging, by one estimate, nearly half the homes in Abaco and Grand Bahama, which have 70,000 residents and are known for their marinas, golf courses and all-inclusive resorts.

Bahamian Health Minister Duane Sands said 17 of the dead were from the Abaco islands and three from Grand Bahama. He said he could not release further details because the government still had to contact family members.

Some people in the Abaco islands complained that they had not seen any aid except for medical supplies for the main hospital, where hundreds of people were temporarily living as they awaited help.

By late Wednesday, Dorian was pushing northward off the Florida coastline with reduced but still-dangerous 110 mph winds. An estimated 3 million people in Florida, Georgia, North Carolina and South Carolina were warned to clear out, and highways leading inland were turned into one-way evacuation routes.

At 10 p.m. Wednesday, Dorian was centered about 130 miles south of Charleston, South Carolina, moving north at 8 mph. Hurricane-force winds extended up to 70 miles from its center.
Dorian was expected to pass dangerously close to Georgia and scrape the Carolinas on Thursday and Friday with the potential for over a foot of rain in some spots and life-threatening storm surge.

“Hurricane Dorian has its sights set on North Carolina,” Gov. Roy Cooper said. “We will be ready.”

As the threat to Florida eased and the danger shifted farther up the coast, Orlando’s airport reopened, along with Walt Disney World and Universal. To the north, ships at the big Norfolk, Virginia, naval base were ordered to head out to sea for safety, and warplanes at Langley Air Force Base in Virginia were sent inland.

The U.S. mainland recorded its first death in connection with the hurricane, that of an 85-year-old man in North Carolina who fell off a ladder while preparing his home for the storm. Dorian was also blamed for one death in Puerto Rico.

On Tybee Island, Georgia, Debbie and Tony Pagan stacked their beds and couches atop other furniture and covered their doors with plastic wrap and sandbags before evacuating. Their home flooded during both Hurricane Matthew in 2016 and Irma in 2017.

“It’s a terrible way to live,” Debbie Pagan said. “We have the whole month of September and October to go. How would you like to be living on pins and needles?”

Another Tybee islander, Sandy Cason, said: “The uncertainty and the unknown are the worst part. Just not knowing what’s going to be here when you get back.”

Along King Street in historic Charleston, South Carolina, dozens of shops and restaurants typically bustling with tourists were boarded up, plywood and corrugated metal over windows and doors, as the flood-prone downtown area braced for high water.

Mark Russell, an Army veteran who has lived in South Carolina much of his life, went to a hurricane shelter right away. As for those who hesitated to do so, he said: “If they go through it one time, maybe they’ll understand.”