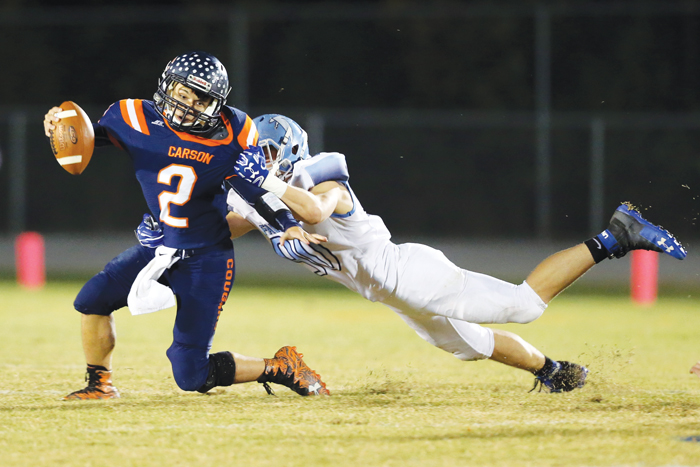 MOUNT ULLA — West Rowan’s Baiden Suddarth played on the defensive line as a sophomore and held his own, but a switch to linebacker transformed him into one of the county’s most tenacious defenders.

He and Daniel Durham, who graduated last spring, formed a dynamic linebacking duo in 2018. Suddarth averaged 13.8 tackles per game as an all-county junior, with 96 solos and 16 tackles for loss.

As a senior, Suddarth shows no signs of letting up. He made 14 tackles on Friday as West Rowan, playing at home and with many players from the state championship teams of 2008-10 in attendance, rolled 34-0 against North Rowan.

“Playing linebacker is the position that suits me best,” Suddarth said. “I get to fly around. I get to be me.”

Linebacker is a position that combines the cerebral with the physical. You have to be smart enough to know where a play is headed. You have to be tough enough and strong enough to do something about it when you get there. Suddarth, who packs a punch at 215 pounds, is the perfect linebacker.

“Baiden has a year under his belt now,” West head coach Joe Nixon said. “He knows what to expect at that position and he knows what to do. He plays with a high motor all the time, and the guy is a tackler. If there’s a difference in him now and a year ago, it’s that he’s taking on more of a leadership role. He takes a lot of pride in our defense and in our how hard our defense plays.”

The primary challenge for any team facing North Rowan is dealing with running back Malcolm Wilson, but West was up to handling that confrontation . The Falcons boast some extra-large bodies up front, and they weren’t being budged. North’s linemen couldn’t get to Suddarth, and he was there to make a lot of hits for negligible gains.

“I was just reading North’s guards and playing as hard as I could,” Suddarth said. “Most of the credit goes to our big guys upfront. They were taking care of the blockers. They kept me free, so I could make some plays.”

While a lot of North’s running plays didn’t go anywhere, Nixon’s favorite Suddarth action from Friday was a maximum-effort tackle on an 8-yard gain by the Cavaliers.

North quarterback Kyree Sims scrambled and broke containment. Suddarth slipped as he was pursuing Sims, got back up, resumed the chase and eventually made the tackle on the opposite sideline.

“Coach always tells me I need to be a sideline-to-sideline player,” Suddarth said.

On that play, quite literally, he was.

In the winter, Suddarth is a standout wrestler. He grapples at 195, 15 pounds below his football weight. He was a state qualifier as a sophomore. As a junior, he went 33-9 and achieved two wins  in the 3A state tournament.

Wrestling combines discipline and aggression, so it’s an ideal sport for Suddarth, a county champion, to pursue when he’s not chasing quarterbacks.

“Wrestling has helped me in football a lot as far as my conditioning and strength,” Suddarth said.

West faces an explosive team Friday when Cox Mill  visits Mount Ulla. Suddarth says the Falcons are ready for the next challenge.

“Getting a shutout, getting that zero last week felt amazing,” Suddarth said. “As a defense, we’re just trying to put in the work every day to get better. We have the potential to be a championship team.”