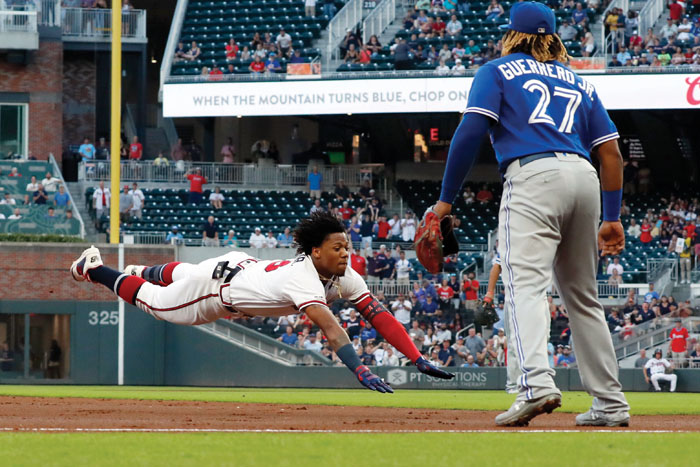 AP Photo/John Bazemore ... Atlanta Braves’ Ronald Acuña Jr. (13) dives into third base with a triple as Toronto Blue Jays third baseman Vladimir Guerrero Jr. (27) waits for the throw during the first inning of Tuesday night’s game in Atlanta. The Braves won, 7-2, and open a big four-game series against Washington tonight.

A look at what’s happening around the majors Thursday:

The Nationals trail Atlanta by seven games in the NL East. Washington leads the NL wild-card race by three games over the Cubs.

Michael Lorenzen is making himself valuable wherever the Reds need him. In his latest performance, he did something no major leaguer has done since Babe Ruth in 1921.

On Wednesday, Lorenzen earned the win as a pitcher, hit a home run and played the field as Cincinnati beat the Phillies 8-5. Lorenzen pitched two innings, connected for a two-run drive and finished up in center field.

Christian Yelich and the Brewers get a chance to move up in the NL wild-card race when they host the Cubs to begin a four-game series at Miller Park. Milwaukee trails Chicago by 3 1/2 games for the second slot

Left-hander Brett Anderson set his career high in wins with 11 as an Oakland rookie in 2009. Now, at age 31 and back with the Athletics for a second stint the past two years, Anderson can top that with a 12th victory when he pitches the series finale against the visiting Angels.

A fellow lefty, Jose Suarez, faces Oakland for the first time in his career and looking for his first victory in 11 starts — the longest winless stretch by an Angels pitcher this year — since June 15 at Tampa Bay.

Nationals right-hander Aaron Barrett is back in the majors following a series of arm injuries and is looking to make his first big league appearance since Aug. 5, 2015. Barrett had Tommy John surgery in 2015, then broke his humerus bone while throwing in 2016. Barrett got back to the majors Wednesday when Washington purchased his contract from Double-A Harrisburg but didn’t pitch in a loss to the Mets. He could get his moment during a four-game series against Atlanta.

WASHINGTON (AP) — A night after a brutal loss, the New York Mets got back to doing what they have since the All-Star break: Winning another series.

Justin Wilson and the bullpen held on this time, rookie Pete Alonso hit his major league-leading 45th home run and the Mets rebounded to stop the Washington Nationals 8-4 Wednesday.

A day after a trio of Mets relievers was tagged for seven runs in the bottom of the ninth inning in an 11-10 loss to the Nationals, three pitchers combined to close with 3 1/3 scoreless innings.

“That was a tough loss last night,” manager Mickey Callaway said. “They bounced back well. They came out swinging the bats. We did the job on the mound. That was a good win.”

After Wilson issued a two-out walk to Kurt Suzuki — whose three-run homer won it Tuesday night — Victor Robles followed with an easy grounder to Amed Rosario. The shortstop tagged second base for the last out, then zipped a relay to first, as if to make sure the Mets really nailed it down.

The Nationals’ lead atop the NL wild-card race was cut to three games over the idle Chicago Cubs. The Mets trail the Cubs by 4 ½ games.

New York’s Wilson Ramos went 0 for 4, ending a 26-game hitting streak that tied for the second longest in club history. The slow-footed catcher was barely thrown out by second baseman Howie Kendrick on a grounder in the ninth.

“I went as hard as I can to get that single,” Ramos said. “That was a great play by Kendrick. I’m excited and proud of what I did.”

New York has won 12 of 16 series since the All-Star break. Washington dropped a series for the first time since Aug. 9-11 against the Mets. New York took eight of its last 10 against the Nationals and won the season series 12-7.

NEW YORK (AP) — Aaron Judge hit a go-ahead, two-run homer to keep up his power resurgence, Gleyber Torres added his 34th home run and the New York Yankees beat the Texas Rangers 4-1 Wednesday night to move 43 games over .500 for the first time since 2009.

Day after day, Judge said he felt fine and was merely slumping, even though evidence seemed to indicate otherwise. Balls that usually soared over fences were caught on the warning track.

His revival started Aug. 20 with 467-foot home run to left at Oakland off Joakim Soria, Judge’s first pulled home run this season. He homered in all three games that weekend at Dodger Stadium and starting with the West Coast trip opener at the Athletics, he is hitting .317 with eight homers and 12 RBIs in 15 games.

Judge set a high standard for himself in 2017, when he was a unanimous pick for AL Rookie of the Year after hitting 52 homers with 115 RBIs. Judge’s 2018 season was interrupted when his right wrist was broken by a pitch from the Royals’ Jakob Junis on July 26, an injury that sidelined him until Sept. 14 and limited him to 27 homers and 67 RBIs for the season.

Judge lined a fastball from Lance Lynn (14-10) over the right field wall in the third inning following Brett Gardner’s walk, the fifth Yankees player to hit 20 homers this season. He struck out in his other three at-bats, stranding five runners, leaving him with a .275 average and 45 RBIs going into the season’s final 3 1/2 weeks.

Torres homered in the fourth, tying Gary Sánchez for the team lead and joining Joe DiMaggio as the only Yankees to hit 34 homers at age 22 or younger. The home run was the 200th off the Rangers this season.

Lynn dropped to 0-4 in his last six starts, allowing three runs in five innings. Texas matched its season-worst of five games under .500 at 68-73 and dropped a season-high 22 1/2 games back of first place in the AL West.

Peeved that plate umpire Will Little kept throwing balls out of play, Lynn yelled to him: “We’ve got a plane to catch.” Little responded he only discarded balls hit in the dirt or off bat handles.

Austin Romine had a pair of hits with the runner on first going, including an RBI double.

Rangers: RF Nomar Mazara missed his second straight game due to a sore left oblique. … OF Hunter Pence (strained lower back), who has not played since Aug. 22, could rejoin the Rangers during the upcoming series in Baltimore but will not be activated. … OF Joey Gallo (right wrist surgery) took early batting practice and could return mid-month, He last played July 23.

Yankees: OF Giancarlo Stanton will head to the team’s minor league complex in Tampa, Florida, this week for batting practice, among the final steps before returning for the final weeks of an injury-wrecked season.