Salisbury-connected family in the Bahamas survives hurricane but loses home 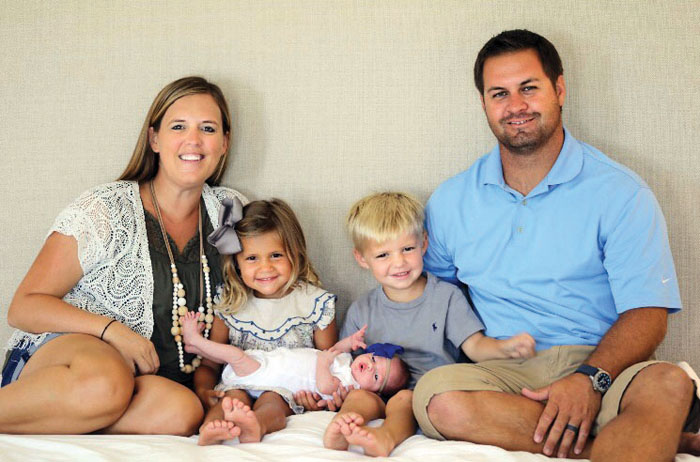 For a 14-hour period over the weekend, Scott and Ellen Maddox of Salisbury felt helpless.

Their daughter Ashley Knowles, son-in-law Aaron and the couple’s three young children — ages 1 month, 3 and 5 years — were caught in Category 5 Hurricane Dorian, making a direct hit on the Knowles’ Hope Town home in the Bahamas.

In their last telephone conversation Saturday evening, the Maddoxes learned Ashley and Aaron had taken their family to his parents’ house next door.

From there, they told the Maddoxes, they could see the shingles coming off their own house’s roof. A palm tree was coming up by the roots, and the in-laws’ house was swaying back and forth in the strong winds and rain.

Ashley told her parents she would keep them updated and confided to them she was scared.

That was the last the Maddoxes heard for 14 hours. Meanwhile, they didn’t sleep and kept hearing and seeing report after report of the devastation left by Dorian.

The ferry boats were swamped. Whole resorts, such as the one where Aaron and Ashley work, were wiped away. People and boats were missing. Docks were sunk. Homes were blown off their foundations or under water.

At 10 a.m. Sunday, the Maddoxes received a text from an unfamiliar number of a satellite telephone. It was a message from Ashley and Aaron that essentially said, Scott Maddox recalled Tuesday, “We’re OK. Both houses are gone.”

“There were tears of joy when we heard they were OK,” Scott says.

The Maddoxes also learned Sunday the couple and their grandchildren were among nine people huddled in a tiny concrete-block building — the pump filter house for the pool at the Hope Town Inn and Marina, the resort that Aaron Knowles manages.

The Maddoxes have made numerous trips to the Bahamas over the years to see Ashley, Aaron and the grandchildren. So they are familiar with where everything is located.

Scott Maddox says it’s probably a good 350 yards from the in-laws’ house to the pool area.

“I’m just shocked they could get there,” he says. “I can’t wait to find out how they did this.”

Aaron’s parents own and operate a smaller marina just for boats. Both the bigger resort and the Knowles’ marina will have to be rebuilt. Part of this development also included 12 houses along the bay, which ranged in value from $750,000 to $1 million.

All those houses are gone.

The Hope Town Inn and Marina included villas, suites and hotel rooms. Only two hotel rooms were able to provide shelter, and the Knowles family has been staying in one of those after emerging from the pool filter house. There is no power.

The Maddoxes have been piecing all this information together from various messages and communications with the company that owns the resort. As of Tuesday, the company planned to arrange for a seaplane to land in Hope Town, pick up the family and fly them to Fort Lauderdale on Wednesday.

From Fort Lauderdale, the company intends to fly the family back to Salisbury so they can stay with the Maddoxes, who should be able to set eyes on Ashley and the grandchildren sometime Wednesday evening.

“They have gone above and beyond,” Scott Maddox says of the company Aaron works for. “They have said, ‘We’re not worried about the resort. We have insurance. But we have to get (our) people out of there.'”

Ashley and Aaron, also covered by insurance, have been married six years, and Ashley has lived in the Bahamas for eight years. She’s a graduate of Salisbury High School.

In Salisbury, the Maddoxes have heard from countless people who have learned of Ashley’s family’s ordeal and offered support and prayers. Maddox says it has meant a lot.

The Lora Belle store at 221 S. Main St. is accepting gift cards and clothing for the family.

“The community has been just wonderful,” Scott says. “We’ve gotten calls, texts, offers of help — because she has nothing. They’re starting over. … It’s just devastation for them.”

Maddox says the best donation might be gift cards, because of the difficulty there will be in eventually moving things back to the Bahamas.

As of Tuesday afternoon, the Maddoxes still had not heard Ashley and Aaron’s voices since their last phone call Saturday night. Scott says the feeling of helplessness is all-consuming when there’s nothing parents can do for their children in the path of danger.

“A dad’s supposed to take care of their kids,” Maddox says. “It’s a terrible feeling.”

Ellen Maddox finally was able to get a few hours sleep Monday night, he says.

The Maddoxes found themselves following Facebook posts from Hope Town through the Hope Town Bulletin and Hope Town Fire & Rescue.

The posts were distressing and heartbreaking, Scott says.

On the Hope Town Bulletin site, for example, safe lists of people were being posted, while others were looking for word about family members they hadn’t heard from.

The posts started with phrases such as “Desperately needing news on …,’ or “Has anyone heard from …,” or “Please, does anyone know anything on …?”

Maddox says it looks as though a bomb has been dropped on the Bahamas, and it will take years for the islands to rebuild. And most people there do not carry expensive hurricane insurance.

“We’re not special,” he says of what his own family is going through. “We’re not the only ones going through this. I really feel for the people who can’t get away. … I’m sure it’s worse than I know it is.”

The Maddoxes had planned to travel to the Bahamas in two weeks for a grandchild’s birthday. They last visited in July.

When his daughter’s family arrives in Salisbury, Maddox says his and Ellen’s priority will be to take care of their immediate physical and emotional needs.

“They need to be as normal as they can be,” Scott says.