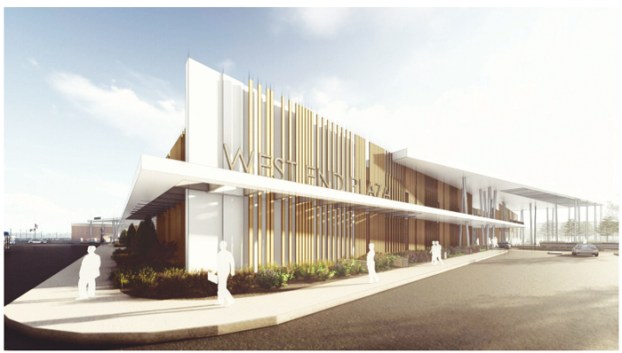 SALISBURY – The Rowan County commissioners on Tuesday approved a list of next steps in ongoing talks to fill empty space in West End Plaza.

Among those items was a vote to ask an architect to finalize a design for an agricultural center with a base cost of $15 million.

“Most folks from the outside are shocked that we got the mall for that deal … The question is more so asked when are you going to do something with that facility,” Chairman Greg Edds said. “We’ve done a few things with it. But I think the answer has been that we’ve not been distracted but we’ve had other fish to fry.”

Assistant County Manager and Finance Director Leslie Heidrick made a presentation during the meeting about the county’s finances, saying tenants paid $439,000 during the 2019 fiscal year, which ended in June. The county also received $46,000 from event rentals for a total of $485,000. That’s a decrease from fiscal year 2015, in which the county received $600,000 in revenue related to the West End Plaza

She said Finance Department staff this week would make a transfer that would mean a total of $2.79 million in a capital project fund that could be used for West End Plaza.

The project in question is one for which local residents were previously provided the opportunity to view two designs during an open house at West End Plaza. The county has drafted plans for an agricultural center that would include meeting space and offices for Rowan County Cooperative Extension, the Soil and Water Conservation District offices, the N.C. Forestry Service and the Farm Service Agency.

“The question now is where do we go? We met a few weeks ago to talk about a plan with the agricultural department, we had a public meeting out at the mall, a lot of positive responses, where do we go from here?” Edds said.

“Commissioner Caskey and myself have been working with the sheriff and his administration they have requested that we move the sheriff’s department out to the Big Lots building. He says he needs more space,” said Commissioner Craig Pierce.

He added that only the administrative staff of the department would move, not the jail or bailiffs. That would enable, among other things, to move magistrates into the courthouse and allow their office to be bulldozed to make way for more parking.

“Our ultimate goal is to make sure our citizens are safe, and if our sheriff is saying he needs that space to do that job, I think we ought to take that into consideration,” Pierce said.

In Pierce’s request, he asked that architects with ADW meet with the sheriff and create a blueprint to incorporate the sheriff into a relocation plan.

“If we’re going to start spending the money out there, let’s put this on the table also. Let’s see what all we can do within our budget constraints,” Pierce said.

Commissioner Judy Klusman asked for the same consideration for the social services and health departments. There was no vote taken on her request.

There were a number of votes taken in conjunction with talk about the facility’s future on Tuesday. They included:

• The commissioners approved a motion made by Pierce for the sheriff and County Manager Aaron Church to study Pierce’s request.

• They gave approval to the county manager to draft a policy that would allow the county to be able to rent out any underutilized sections of the mall to local community organizations and businesses.

• They asked the county manager to research possible used for the movie theater located at West End Plaza. Edds said he wanted to try to entice an operator to reopen a movie theater at the now-shuttered facility.

• A proclamation was presented honoring the Rowan Little League softball team. It was added to the agenda. The team was recognized for winning the Little League World Series Softball championship.

SALISBURY — In response to potentially dangerous conditions because of Hurricane Dorian, which has prompted evacuations for coastal North Carolina... read more