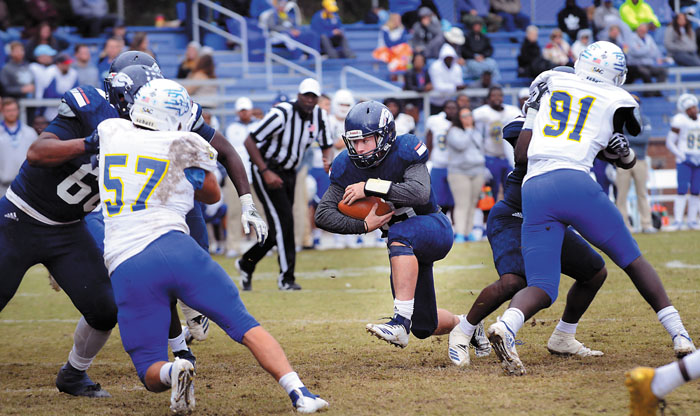 Wayne Hinshaw / for the Salisbury Post Catawba quarterback Ken Avent runs the ball during a game against Limestone last season.

It’s that time of year.

“For a football coach, the season always takes too long to get here,” said Walker, who is 39-28 in six seasons. “That time from the end of spring practice to now seems to take forever.”

It does seem like an eternity since Catawba won in overtime against UNC Pembroke at Shuford Stadium last Nov. 17. That was only the Indians’ fourth victory, closing the door on a disappointing season that will be remembered for Hurricane Florence, defensive breakdowns and offensive meltdowns. In Walker’s previous seasons, things had gone considerably better — with records of 6-5, 6-5, 9-3, 5-6 and 9-2.

Catawba seemed to be getting stronger and deeper for years, made the Division II playoffs in 2015 and made a good case to participate in the playoffs in 2017. From 2015-17, the Indians won 16 of 21 South Atlantic Conference games, and the league features a number of consistent programs. But everything that could’ve gone wrong did go wrong in 2018. Catawba won only twice in the eight-team conference and finished seventh.

Walker said the rescheduled (from Hurricane Florence) win over UNC Pembroke provided valuable experience for young players and provided energy for an important spring and summer.

Those spring and summer months were spent identifying what went wrong and attempting to find solutions.

Catawba lost some believers last season. The SAC’s coaches picked Catawba to finish sixth this year. That could be accurate. Then again, Catawba could move right back to the top. It’s a fine line in the SAC between agony and ecstasy.

“Defensively, we lost our edge, and we know we have to get that back,” Walker said. “We have to control gaps better, maintain gap integrity. We got fooled by play-action too much and put guys in bad positions.”

Only two Indians were picked as first team All-SAC in the preseason poll — receiver Will Sweeper and linebacker Jeremiah Ferguson — but there are plenty of reasons to be optimistic about this Catawba squad. Catawba doesn’t have an obvious area of weakness.

“I wouldn’t say we’ve got any one or two guys leading us because we’ve got a lot of guys have emerged as leaders in the offseason,” Walker said. “Many have stepped up to the task of leadership. That’s exciting to see.”

Offensively, the Indians will be triggered by returning quarterback Ken Avent III, who accounted for 19 touchdowns in eight games. He threw for 1,565 yards and netted 447 more on the ground.

“He’s that dual-threat quarterback that you need to have,” Walker said. “He’s not turning the ball over at all, and he’s learning to use his feet as a great second weapon.”

Protecting Avent is a solid group. Demetrius Blackwell and Ken Norton are experienced and efficient. The 0-line figures to receive a significant boost from the return of Zach Mayo, a tough guy who missed all of last season with an injury.

“We’ve got a wealth of experience with that group,” Walker said. “They’re good in the running game, as well as pass-blocking.”

“In a scrimmage, he took a screen pass to the end zone untouched, the way Sam Mobley used to do,” Walker said. “He’s a weapon.”

At running back, Catawba lost Kenyatta Greene, so there’s uncertainty about what level of production Catawba can get. Greene was very special. Demonte Good (80 carries, 357 yards) is the proven returner, and Walker is optimistic the Indians have future Greenes in the freshman class.

“Kenyatta was the most explosive player in our league,” Walker said. ”

Defensively, there are quite a few anchors still on board — Ferguson and L.J. Melvin at linebacker, Cris Page and Caleb Allen in the secondary, Cameron Davis up front. That’s just to name a few.

“L.J. Melvin is a unique player, and we’ll use him in a lot of ways,” Walker said. “He’s a pass defender, a pass rusher and a run-stopper. Caleb Allen had a great spring. You can tell he wants to be great.”

The game is starting to slow down for many young Indians who have bright futures. They no longer have to think every snap. Now they can just play and let their instincts and talent take over. Walker expects big things from sophomore safety Brenden Westbrook, the former Carson standout, and sophomore defensive lineman Robert Chery.

“Westbrook and Chery were our spring co-MVPs,” Walker said.

Catawba has an intriguing freshman class, filled with athletes. Keep an eye on defensive linemen Joe Camara, who starred at Northwest Cabarrus, and John Oxce.

The name to know as far as special teams is Clayton Crile, a freshman.

With Lee Brackman (who provided almost automatic touchbacks on kickoffs) graduated, Crile will enter the season as the No. 1 guy on the depth chart for punts, placements and kickoffs. Catawba also will be relying on a freshman long snapper.

“Crile kicked a 47-yard field goal with a lot of room to spare in our scrimmage,” Walker said. “There’s been good competition, but he won the job.”

Catawba’s opener will be a challenge — with the Indians scheduled for a noon kickoff this Saturday against 15th-ranked West Georgia.

At least it’s at Shuford Stadium. Logistically, it wasn’t routine to make the 330-mile trip to Carrolton, Ga., in 2018. Catawba scored first, but wound up being pounded 34-3.

West Georgia was ranked as high as No. 3 nationally last season when it was 10-0. The Wolves dropped their last two outings, including a setback against Wingate in the playoffs.

“West Georgia will be as good as anyone we play, a great gauge as to where we are,” Walker said. “We’ll find out right away if we got our edge back.”

NOTES: West Georgia has exceptional special teams and several returning defensive studs. … The Carolinas are expected to start feeling wind and rain effects from Hurricane Dorian as early as Wednesday, as the storm moves north.