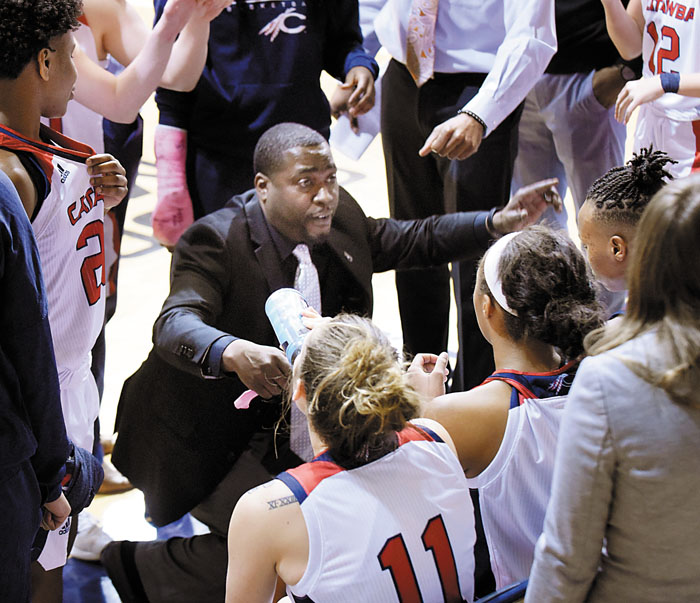 Wayne Hinshaw file photo/for the Salisbury Post ... Catawba women’s basketball coach Terrence Baxter, shown in the team huddle at a timeout during a game last season against Newberry. Baxter is excited about this year’s team, which features three super freshmen, including three-time Rowan County Player of the Year Janiya Downs.

Catawba went 0-0 on the court, but that’s the month that Ledford’s Lyrik Thorne and South Rowan’s Janiya Downs let him know they were coming. While they both played in the 2A Central Carolina Conference, the 2,000-point scorers were more acquaintances than friends last fall. They arrived at the same decision independently.

“Last September, my nerves calmed down a whole lot because I knew how bright the future could be,” Baxter said. “Obviously, both of those girls were looked at by Division I schools and had some options. There was a time when it looked like it might be a reach for us to be spending time recruiting them, but both of them fell in love with the family atmosphere at Catawba. And at the end of the day, it’s not about whether it’s D-I or D-II, it’s about where it feels right. Where do you feel comfortable? For both of those girls, the answer was Catawba.”

Baxter recruited Downs diligently for two years. The things she did in high school were eye-popping, mind-boggling and breath-taking. She averaged a Rowan County-record 32.3 points as a senior and finished as the No. 2 scorer in county history (2,371 points). She was a unanimous Associated Press All-State pick,  a two-time Rowan County female athlete of the year and a three-time basketball player or co-player of the year. As a senior, she poured in 839 points, including a county-record 53 in one game.

Downs had to handle the ball, rebound and score for South, especially her senior year. She won’t have to worry about ball-handling responsibilities at Catawba. She should be a rebounding/scoring/stealing force as a long-armed, 5-foot-11 forward, and Baxter envisions her playing some center when Catawba goes to a small, quick lineup. Downs was a successful track sprinter, so there aren’t a lot of D-II bigs who are going to be able to keep up with her.

“Janiya is going to be a matchup problem, and she’s going to have help like she’s never had before,” Baxter said. “She’ll be an immediate impact player.”

Baxter has known Thorne her whole life. He lived on the same street as Thorne’s mother growing up. They are cousins.

“I’ve been following Lyrik closely since she was in middle school,” Baxter said. “I know her AAU coach well and played ball against him. There was never any doubt in my mind she was a D-I player, but we never stopped talking to her, and when some schools dropped the ball, we were fortunate enough to sign her.”

Thorne, the leading scorer in Davidson County history, is still first and foremost a polished point guard who will set up her teammates and make everyone on the Catawba roster better. She’s not big, but she’s a magician as a ball-handler and is almost indefensible because she combines blinding quickness with a terrific shooting stroke. Challenge her defensively and she blows by with either hand. Back off and she buries the jumper. It’s a formula that is simple, but deadly.

“She’s the centerpiece of a great recruiting class, the puzzle-finisher, a girl who can change our program,” Baxter said. “We’re giving her the ball, and we’re giving her the ball from day one. There’s no reason to wait around for anything. She’ll need to get stronger, but there’s not a lot for her to learn. She can score at all three levels and she already understands the game like a coach. She is in complete control out there. She knows what to do.”

Baxter gave the lion’s share of the credit for recruiting Thorne and Downs to Catawba’s returning players, a group led by senior Madi Hallman and juniors Talia Barnes, Taisha DeShazo and Shemya Stanback. They’re the ones who made them feel at home on recruiting visits, who welcomed them as potential teammates, even though their arrival will change everyone’s role.

“I can get a recruit to come here and I can be honest with them about what they can expect, but then it’s up to the girls who are in the program already,” Baxter said. “Many girls make their  college decision based on who their teammates are going to be. Our girls bonded with the recruits, even though they knew they might be cutting into their playing time.”

Downs and Thorne made things official with Catawba in December.

Catawba gained a commitment from 6-foot post player Sara McIntosh right after Christmas. McIntosh, who began her high school career in Missouri, was an all-conference player the last two seasons at Pinecrest High in Southern Pines and finished with more than 1,000 career points. She’s a good athlete who also has a softball background.

“We were looking for a post, and (Catawba assistant) Terence McCutcheon heard about Sara and went to check her out,” Baxter said. “When he came back, he said, ‘Yes, we want her.’ Sara can run the floor and she can keep up with a fast pace. She’s a bruiser, a physical presence, but she’s also an energy pack. She’s talking every second she’s on the court.”

Shaunae Sawyers, a dynamic guard from Mount Airy, signed with the Indians in March to elevate the class to another level.

“Mount Airy came to Catawba’s camp for years, so we saw a lot of Shaunae,” Baxter said. “She’s completely fearless and always wanted to guard the big names. She wants to take on the best guard on the other team, and I can see her doing that for Catawba for a long time. She was a 1,000-point scorer in high school, but it’s her defensive tenacity that makes her so special. She’s all-out, all the time.”

Late in the recruiting game, Catawba added a fifth member of the recruiting class after Destiny McLean contacted the Indians. She was a double-digit scorer on a 24-4 team at Eastern Guilford High as a senior, graduating in 2018. She turned down D-II and D-III offers, opting to attend college at UNC Greensboro as a regular freshman student. When she made a decision to make a hoops comeback, Catawba was one of the schools she contacted.  Baxter was impressed with her work in a tryout, so she’ll be part of things, as well.

In July, Baxter watched with a wide grin spreading across his face as Thorne (16 points), Downs (12 points) and Sawyers (10 points) competed for the West all-stars in the annual East-West Game in Greensboro.

“Those girls didn’t get to play together, not all three at once, until the last 30 seconds, but they more than held their own against some D-I recruits,” Baxter said. “The last Catawba recruit who played in that game was Terri Rogers (who had a great career), but now we’ve got three in one recruiting class.”

“Last year we were practicing with eight or nine and with some of those banged up, but next season we’ll have three teams of six players in practice, and all three teams will have a legit point guard and post player and they can just fight it out,” Baxter said. “I think everyone on this team can smell the change in the air. They’re hungry to beat some of the teams that have been whupping us.”

Reports are that the pickup games being played at Goodman Gym in recent days are outrageous, with Thorne and Sawyers going at it.

“Last season, the girls would come in and play two or three games, but now they’re playing for an hour and a half,” Baxter said. “These are girls we have to kick out of the gym.”

Baxter said the plan is for the Indians to play at a much faster tempo, so they can make the maximum use of their increased numbers and speed.

“We’ve not only got more bodies, we’ve got more people who can do more things,” Baxter said. “The season can’t get here soon enough.”

Catawba already has commitments for its next recruiting class from Forbush guards Nicole Scott and Hope Grimes.

The season starts on Nov. 8-9, with Catawba playing at Newberry against North Greenville and Erskine. The first home game is against Lees-McRae on Nov. 23.