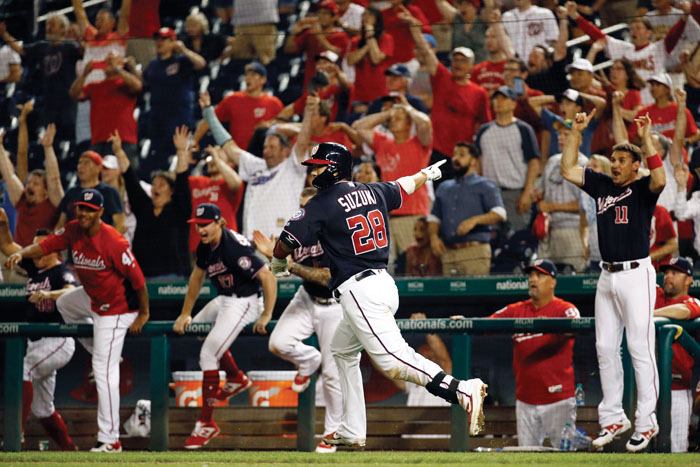 NATIONALS 11, METS 10
WASHINGTON (AP) — Kurt Suzuki capped the largest ninth-inning comeback in Nationals history with a game-ending, three-run homer, helping Washington score seven runs in its final at-bat to beat New York.
Mets relievers Paul Sewald, Luis Avilan and Edwin Díaz pitched through the meltdown, retiring just one Nationals batter while Washington rallied for its 20th win in 26 games.
New York led 10-4 after scoring five runs in the top of the ninth. Wilson Ramos extended his hitting streak to 26 games and Pete Alonso crushed his 44th homer to put the Mets in position for a win over the current leaders in the NL wild-card hunt.
Sewald allowed four hits to his five batters, including Trea Turner’s RBI double and Anthony Rendon’s RBI single. Avilan allowed a single to load the bases, and then Díaz (1-7) relieved and allowed a two-run double to pinch-hitter Ryan Zimmerman followed by Suzuki’s blast.
Javy Guerra (3-1) retired the only batter he faced to end the Mets’ ninth.

CINCINNATI (AP) — Bryce Harper drove in his 100th run with a single, J.T. Realmuto had a pair of hits and a sacrifice fly, and the Philadelphia Phillies won their third in a row Tuesday night, 6-2 over the Cincinnati Reds.
The Phillies began the day 2½ games behind the Cubs for the final NL wild card.
Harper’s fifth-inning single made him the first Phillie since Ryan Howard in 2011 to have 30 homers and 100 RBIs in the same season. Harper hit his 30th homer in the series opener, a 7-1 Phillies win on Monday. The last Phillies outfielder to have 30 homers and 100 RBIs in a season was Pat Burrell in 2005.
Harper’s single also gave him an 11-game hitting streak.
Left-hander Amir Garrett (4-2) walked a pair of batters and gave up Cesar Hernandez’s RBI single that put the Phillies ahead to stay. Scott Kingery homered in the ninth.
Nick Vincent (1-2) pitched an inning in relief of Vince Velasquez, who lasted three innings.
The fading Reds have lost nine of their last 13.
YANKEES 10, RANGERS 1
NEW YORK (AP) — James Paxton pitched one-hit ball for seven shutout innings, striking out 12 and winning his seventh straight start as New York beat Texas.
Gary Sánchez hit two home runs, Edwin Encarnación added a two-run drive in his return from the injured list, and Didi Gregorius and Brett Gardner also connected.
Paxton (12-6) pitched quickly and began with 4 2/3 hitless innings. He gave up one hit and walked one.
Edinson Volquez (0-1) opened the game for Texas and allowed two runs on one hit.
Scott Heineman hit his first career homer in the ninth off Jonathan Loaisiga for Texas.
BRAVES 7, BLUE JAYS 2
ATLANTA (AP) — Josh Donaldson doubled and drove in three runs, Mike Foltynewicz pitched five scoreless innings, and streaking Atlanta won its sixth straight game.
Ozzie Albies added an early RBI for the Braves, who are 14-2 since Aug. 16 and 32 games over .500 for the first time since the 2003 team finished 101-61.
Tyler Flowers’ three-run double in the eighth finished off the Blue Jays, who have lost 12 of 15 to fall a season-worst 30 games under .500.
Foltynewicz (5-5) allowed a baserunner in each of his innings, but none in scoring position. He walked three and struck out two.
Rowdy Tellez homered and Derek Fisher added an RBI double for Toronto. Wilmer Font (3-4) took the loss.
WHITE SOX 6, INDIANS 5
CLEVELAND (AP) — Carlos Carrasco received a standing ovation in his first appearance at Progressive Field since being diagnosed with leukemia, but gave up home runs to James McCann and Eloy Jiménez in the eighth inning that lifted Chicago over Cleveland.
Carrasco entered the game with a 5-2 lead, but gave up a three-run homer to McCann, which was followed by Jiménez’s second homer of the game.
Cleveland missed a chance to move into a virtual tie with Tampa Bay for the AL wild-card lead. The White Sox ended a season-high seven-game losing streak.
Carrasco (4-7) entered the game after Roberto Pérez’s three-homer in the seventh gave Cleveland a 5-2 lead.
Evan Marshall (4-2) got the win despite allowing Pérez’s home run. Alex Colomé earned his 26th save.
Francisco Lindor also homered for Cleveland.
MARLINS 5, PIRATES 4, 10 INNINGS
PITTSBURGH (AP) — Miguel Rojas hit a tying home run with two outs in the ninth and Garrett Cooper connected in the 10th as Miami rallied past Pittsburgh, ending their franchise-record 15-game road losing streak.
The Marlins were down to their final out when Rojas homered to center field off Felipe Vazquez, who had just his third blown save in 27 opportunities.
Cooper’s home run, a 444-foot shot to left-center, came with one out off Parker Markel (0-1).
Adam Conley (2-7) got the last out of the ninth when Pablo Reyes was thrown out at home while trying to score from second base on Adam Frazier’s infield single.
Jose Urena pitched a perfect 10th for his first save of the season and second of his career. He was Miami’s opening day starter this year.
BREWERS 4, ASTROS 2
MILWAUKEE (AP) — Zack Greinke lost his first game since joining Houston, giving up a three-run homer to Eric Thames as Milwaukee earned a split of the interleague series.
Greinke (4-1) stumbled for the first time in six starts since being traded from Arizona on July 31st. He allowed four runs on eight hits over six innings. He came in 4-0 in his five previous starts.
Jordan Lyles (10-8) made his first career start against the club that made him the 38th pick of the 2008 major league draft. The right-hander allowed two runs on six hits and struck out two over 6 1/3 innings for his fifth win in seven starts since being acquired on July 29th from Pittsburgh for right-hander Cody Ponce.
Josh Hader handled the ninth for his 28th save in 34 chances.
Alex Bregman hit his 33rd homer, a solo shot off Lyles in the sixth, extending his single-season career-best for home runs.
CARDINALS 1, GIANTS 0
ST. LOUIS (AP) — Jack Flaherty pitched one-hit ball over eight innings, Marcell Ozuna homered and St. Louis— with a fluky foul ball-turned-base hit — beat San Francisco.
Flaherty (9-7) carried a no-hitter into the sixth inning and dominated with eight strikeouts and a walk.
Mike Yastrzemski had San Francisco’s only two hits.
St. Louis only had five hits, including one by Paul DeJong that looked like a trick pool shot. DeJong hit a ball that rolled about 10 feet foul of the first base line before spinning all the way back into fair territory roughly 3/4 of the way to the bag. DeJong raced to first to load the bases with two outs in the first.
San Francisco right-hander Dereck Rodriguez pitched out of the inning.
St. Louis has won 20 of its last 25 games. San Francisco has lost seven of its last eight.

ORIOLES 4, RAYS 2, 1ST GAME
RAYS 2, ORIOLES 0, 2ND GAME
ST. PETERSBURG, Fla. (AP) — Austin Meadows homered, seven relievers combined on a five-hitter and playoff-contending Tampa Bay blanked Baltimore to split a doubleheader.
The Rays, who began the day with a slight lead atop the AL wild-card race, had their five-game winning streak stopped with a loss in the opener.
Diego Castillo (3-8), the third pitcher in a bullpen day, allowed one hit over two scoreless innings.
Meadows hit his 26th homer, a solo shot in the fourth. The Rays went up 2-0 in the seventh when Ji-Man Choi’s hit to right bounced over Anthony Santander’s head for a triple.
Avisail Garcia added an RBI single off Gabriel Ynoa (1-8), who gave up two runs and six hits in 6 1/3 innings.
In the opener, Rio Ruiz and Anthony Santander homered and Mark Trumbo drove in a run with a pinch-hit double.
Ty Blach (1-2) went five innings in his fourth start for Baltimore. Oliver Drake (3-2) took the loss.
Travis d’Arnaud’s 16th home run accounted for the two runs off Blach.
TWINS 6, RED SOX 5
BOSTON (AP) — Nelson Cruz and Miguel Sanó connected in the fifth inning to pad Minnesota’s record home run total in a victory over Boston.
Jake Cave added a two-run triple for the Twins, who won for the ninth time in 10 games. Minnesota extended its major league record to 271 homers with nearly four weeks left in the season.
Rafael Devers and Andrew Benintendi homered for the Red Sox, who struggled against a parade of relievers and couldn’t rally all the way back after falling behind 6-0.
Six Twins pitchers combined on a six-hitter, with only four hits allowed before Benintendi’s two-out homer in the eighth off Taylor Rogers.
Lewis Thorpe (2-1) got the win despite allowing three runs and two hits in 3 1/3 innings. Rogers returned for the ninth and got his 23rd save.
Rick Porcello (12-11) struggled from the start.
CUBS 6, MARINERS 1
CHICAGO (AP) — Nicholas Castellanos homered and drove in four runs, and Chicago celebrated the return of Willson Contreras and Ben Zobrist by topping Seattle.
Jon Lester (12-9) escaped three bases-loaded jams while working six innings in his second straight win, helping Chicago stay three games back of NL Central-leading St. Louis.
Daniel Vogelbach’s pinch-hit RBI single in the eighth accounted for Seattle’s only run in its fourth loss in five games.
Félix Hernández (1-5) lasted just three innings in his third start since coming off the injured list after being sidelined for more than three months with right shoulder stiffness.
ROYALS 6, TIGERS 5
KANSAS CITY, Mo. (AP) — Jorge Soler broke the Kansas City home run record with his 39th of the season and Ryan O’Hearn hit a game-ending home run to beat Detroit.
O’Hearn sent the first pitch he saw from Zac Reininger (0-1) in the ninth inning over the fence in right field after a seesaw final three innings.
Tigers’ starter Daniel Norris grooved Soler a 2-2 fastball in the third inning and the Royals’ slugger didn’t miss. The three-run shot broke a tie with Mike Moustakas, who set the previous record with 38 home runs in 2017. The home run also gave Soler 100 RBIs on the season, becoming the first Royal to cross the century mark since Eric Hosmer in 2016.
Ian Kennedy (2-2) blew his fourth save of the season, but got the win.
___
More AP baseball coverage: www.apnews.com/MLB and www.twitter.com/AP_Sports

Erratic Federer loses to Dimitrov in US Open quarterfinals