44-year-old Bryant was angry with Falcons, but now all is forgiven 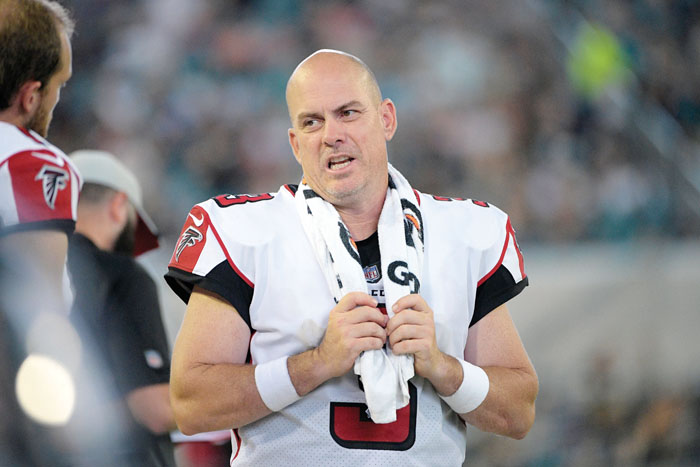 FILE - In this Aug. 25, 2018, file photo, Atlanta Falcons kicker Matt Bryant (3) watches from the sideline during the first half of an NFL preseason football game against the Jacksonville Jaguars, in Jacksonville, Fla. Matt Bryant can admit it now: He was angry when the Atlanta Falcons decided to cut him during the offseason. But all is forgiven. The 44-year-old is back with the team after missing the entire preseason, confident that he's still one of the NFL's best kickers. (AP Photo/Phelan M. Ebenhack, File)

FLOWERY BRANCH, Ga. (AP) — Matt Bryant can admit it now: He was angry when the Atlanta Falcons decided to cut him during the offseason.

The 44-year-old is back with the team after missing the entire preseason, confident that he’s still one of the NFL’s best kickers.

“I would be lying to say I wasn’t upset,” Bryant conceded. “But that’s in the past. We’re here right now. I’m going to give it all I have to help this team win.”

He’s been with the Falcons for nearly a decade, surpassing Hall of Famer Morten Andersen as the franchise’s leading career scorer and establishing a level of confidence that makes his teammates rest easy anytime he trots onto the field.

Bryant has missed only three extra points (out of 375) and 32 field-goal attempts (out of 282) since coming to Atlanta during the 2009 season. Inside of 40 yards, he’s essentially automatic with a 94 percent success rate. Even from long range, the team can usually count on adding three points to its side of the scoreboard (he’s 36 of 46 on kicks of at least 50 yards).

Safety Ricardo Allen compared it to boarding a flight in the modern world.

“Back in the day, when you got on an airplane, most people prayed and everybody was nervous about whether the plane was going to go down or not,” Allen said with a smile. “But nowadays, you don’t see people praying before they get on a plane. Everybody gets on there and it’s like you just take the plane and get to where you go.

“It’s kind of like that with 3 (Bryant’s number) when he gets out on the field. Most kickers you’re praying with. With him, it’s just like, ‘OK, he’s got this. He’s done this long enough. He knows what he’s doing.’ Man, it’s just great to have him back around.”

Despite his success, the Falcons decided to cut ties after Bryant missed three games last season with a hamstring injury. Giorgio Tavecchio was 15 years younger, he was cheaper, and he did a good job filling in while Bryant was out.

But, with no competition, Tavecchio struggled mightily during the preseason, making just 4 of 9 field-goal tries. Before the final exhibition game, the team brought in Blair Walsh for a quick look, even though he didn’t kick at all in the NFL last season.

In the end, the Falcons had little choice except to return to the guy they had all along.

“It’s a good lesson in doing things the right way,” coach Dan Quinn said. “When Matt left, he didn’t leave the brotherhood of the Falcons.”

Bryant’s agent talked with several other teams, but nothing panned out. When the Falcons called, they quickly hammered out a one-year, $3 million deal.

“As a competitor, all you want is the opportunity to go out there and compete and do the best that you can. I still feel like I have it in me,” Bryant said. “Not because I say so, but because my numbers say so. I’m pretty good, and I want to keep on doing it as long as I can.”

Indeed, Bryant’s numbers last season were impressive. He was perfect on 16 attempts inside 50 yards, with his only miss coming from 53 yards. He made his other four attempts from that range, the longest being 57 yards.

“This position is a lot more about mental toughness. You’ve got to be a certain way in the head,” Bryant said. “Physically, a lot of guys can do it. But under certain situations, they can’t. You’ve got be good when things aren’t going so good. You’ve got to be able to come out of that and get back on the straight and narrow.”

While Bryant waited for a team to call, he spent the summer with his wife and seven children at their home in Orange Beach, Alabama. He tried to maintain his regular workout routine, but also found time to haul his kids to the beach — “I worked on my tan,” he quipped — and instruct the kickers at a new local high school.

The family time was rewarding.

Still, it was tough to watch the NFL from afar.

Considering all the erratic kicking the Falcons witnessed during the preseason, it’s easy to understand why the mood seems so much more relaxed heading into Sunday’s regular-season opener at Minnesota.

That familiar face is back.

Even has the same locker.

“It’s just good to have 3 back in the locker room,” Allen said, glancing toward Bryant’s stall in a far corner of the room. “We’ve been with him for a long time. He’s been doing it long enough. We’ve got our trust in him. We know what he can do. He doesn’t have to prove it to us.”