The Fish Bowl opens food truck and aspires to expand 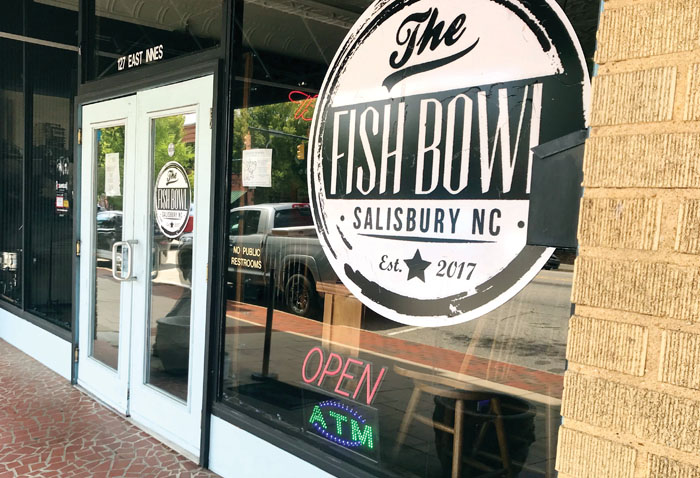 SALISBURY — The Fish Bowl, co-owned by Branson Hurst and Chris Ostle, opened in September 2017 as a bar. Recently, it has added food to the mix.

The bar, located at 127 E. Innes St., now has a food truck called The Hot Box to serve patrons.

The Hot Box has been open at Fish Bowl for about two months.

“We serve finger foods such as street corn, jalapeño poppers, mozzarella sticks, and our Loaded Tornado Potato, which is topped with cheeses, bacon and sour cream,” Cranford said.

Co-owners Hurst and Ostle say they dream of one day expanding beyond the food truck.

“Branson and I both worked here for two or three years and had worked at several other bars in town. This came up for sale, and we purchased it,” Ostle said.

Ostle said he would love to add another bar upstairs as well as possibly add an arcade on the second floor.

The co-owner said he would love to expand the Fish Bowl to multiple locations in nearby cities such as Albemarle, Kannapolis and Concord.

He also is thinking about removing an interior wall that separates the event space and the main bar downstairs.

Hurst said the community atmosphere and the opportunity to meet people from all walks of life are his favorite parts about working at The Fish Bowl.

“I’ve met a lot of good people while working here from doctors, to attorneys, to real estate agents,” Hurst said.

The bar serves cocktails and various types of beer.

“We’ve had over 150 different bands here over the course of two years,” said Ostle. “We’ve had acts from California, Arizona and more. There are a lot of local favorites.”