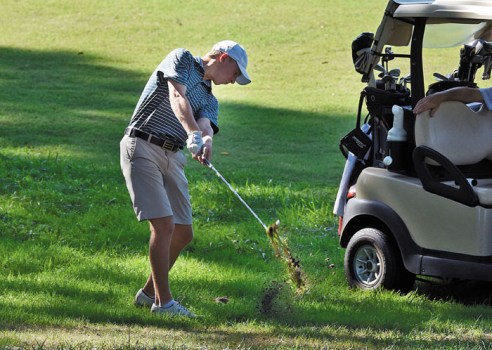 Hank Robins on 4th fairway. photo by Wayne Hinshaw, for the Salisbury Post 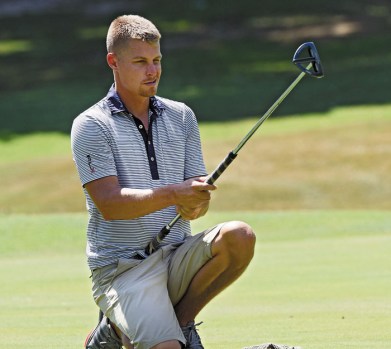 Blake Wray on #6. photo by Wayne Hinshaw, for the Salisbury Post 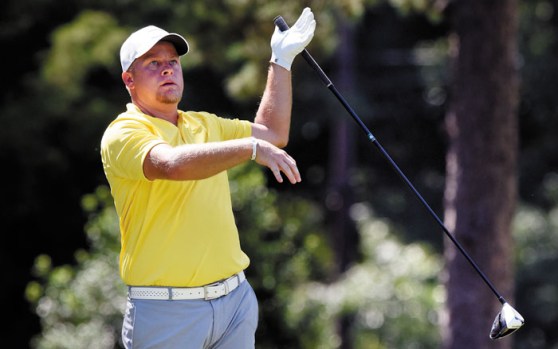 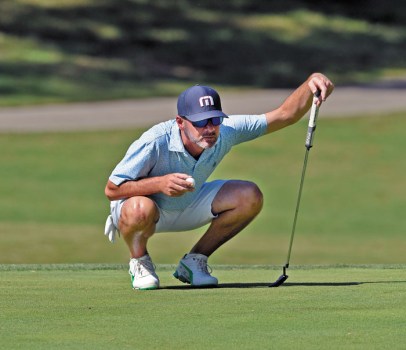 Jason Correll on 17. photo by Wayne Hinshaw, for the Salisbury Post 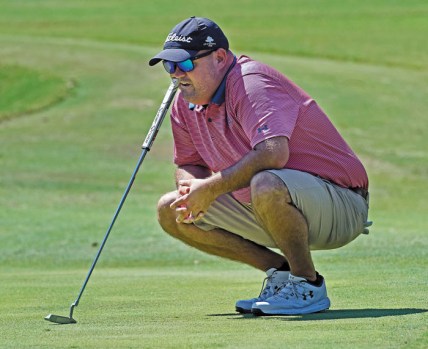 Ryan Honeycutt on 6. photo by Wayne Hinshaw, for the Salisbury Post 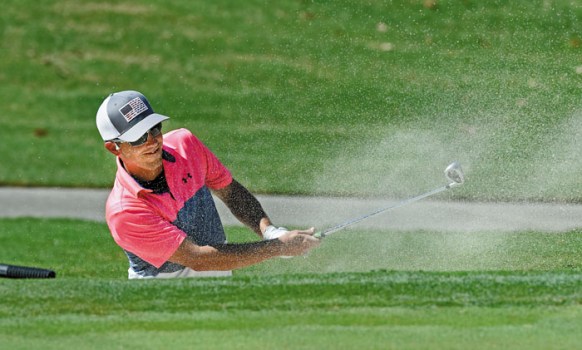 Michael Swaringer in the sand trap on 17. photo by Wayne Hinshaw, for the Salisbury Post 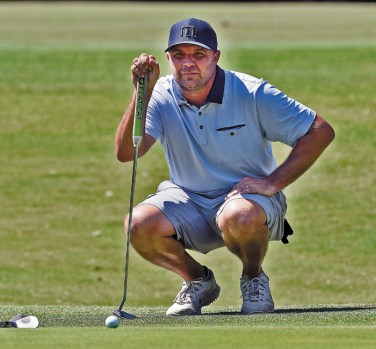 Lee Frick on #6 green. photo by Wayne Hinshaw, for the Salisbury Post

SALISBURY – Every golfer in the championship flight of the annual Labor Day golf tournament at the Country Club of Salisbury will tell you that there really are no upsets.

Yet, when the No. 16 seed tops the two-time defending champions, it is bound to turn some heads.

All eight matches in the opening round were tight, with the biggest “surprise” being a 3 and 2 win by No. 16 seed team of Josh Brincefield and Charlie Barr over Lee Frick and Blake Wray, the winners in 2017 and 2018.

In fact, five of the lower-seeded teams prevailed in the opening round. It took a score of 71 or better to even make the championship fight this year, led by qualifying medalists Ken Clarke and Ken Owen, the 2012 champions, who led the field with a 64. Brincefield and Barr has to win a three-team playoff to even get into the top flight.

“It was back and forth all day until Josh hit a big birdie putt on number 6 to get us started,” said Barr, a junior state champion golfer at Cannon School in Concord. “We birdied 8, 9 and 10 after that and finished 9 under in 15 holes despite two bogies.”

Barr was just an 8th grader back in 2016 when he won the tournament playing with Salisbury’s Troy Beaver, an Elon University golfer. Ironically, the team they beat in the final match included Brincefield. “I know Josh wants it badly and I will do my best to see that he gets that opportunity.”

Brincefield affirmed that winning the Labor Day tournament would mean so much to him. “I started coming out here 26 years ago with my Dad and I realized what a big deal it was,” he said. “When I finally got to where I was competing well enough, I knew it was the one I want to win, it’s the only one I want to win. Nothing would be better for me.”

To get there, Brincefield and Barr have to prevail over two more days of competition against some very talented teams.

Next up for Brincefield and Barr are the 8th seeded team of Michael Swaringen and Chris Williams, teeing off at 1 p.m. today on the first tee. Swaringen and Williams topped the father-son team of Jack Chatt, a Catawba College golfer, and his dad Steve, 3 and 2.

The top qualifiers, Clarke and Owen, beat another father-son team of Thad and Bryson Sprinkle (another Catawba golfer), 4 and 3.

“Anytime you can advance in the championship flight, it is big,” said Clarke. “I don’t care who you are playing, it means a lot because we have won before and we have lost before.” The team was five under after nine and finished 8-under through 15 holes when they closed it out.

Clarke and Owen will now face the team of Chad Clayton and Chase Clayton at 1:16 pm Sunday. The Claytons’ had the toughest match of the day Saturday, as they edged out Jason and Seth Correll, 1-up in 19 holes. They birdied the last two holes in regulation to force extra holes.

The 12th seeded team of Chace Jensen and Nathan Jessup posted a 4 and 3 win over Corey Basinger and Salisbury High golfer Hank Robins. It is the first time in the championship flight for Jensen and Jessup, who posted birdies on three of the first 5 holes on the back side to go 4-up.

“We played well today and it is always fun when you get friends and family to come out and watch you,” Jensen said. “That kind of support makes you play a little bit better.

Jensen and Jessup will now square off against a pair of Catawba College golfers, Tanner Bibey and Trey Burton at 1:08 today. Bibey and Burton edged a pair of talented East Rowan golfers, Austin Miller and Corey Patterson, the county’s prep golfer of the year last spring.

The final pairing on Sunday will have Jared Barnette and Justin Lefler against Kevin Lentz and Joel Marburger, with a 1:24 pm tee time. Barnette and Lefler got past former Labor Day champ Keith Dorsett and Ryan Honeycutt, 3 and 2.

“They are two of the best golfers in the county,” Barnette said, of Dorsett and Honeycutt. “But we never made a bogey and were in play on every single hole. We were just consistent.”

Lentz has not played in the Labor Day event for the past two years, so he and his partner, Marburger, wanted to come out strong against Derek Lipe and William Little. “We did come out swinging and were 4 under after 5 holes,” Lentz said. “Plus our putters were super hot.” Lentz and Marburger, a freshman golfer at Pfeiffer University, closed out the match, 3 and 1.

The winners of Sunday’s quarterfinals will square off Monday morning in the semifinals, with the championship match to follow at approximately 1 p.m.