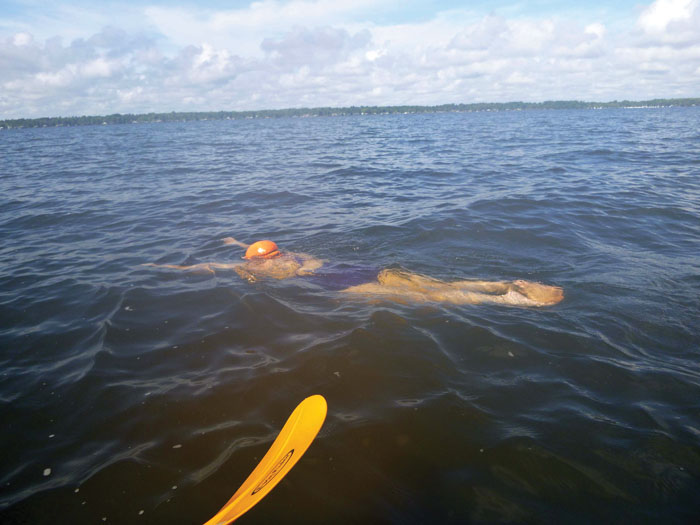 Submitted photo Cheryl Chauncey makes her way across Lake Waccamaw during last year's four-mile 'Take the Lake' swim on Labor Day. Chauncey will be swimming in her fourth 'Take the Lake' in columbus County Monday. 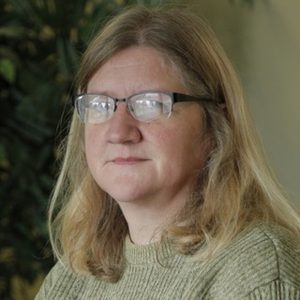 So what’s the feeling, waiting on the shore and knowing that within moments you’re about to enter the lake for a 4-mile swim?

“I do pretty good until I’m standing there in front of the lake and I say, “Oh, crap, I’ve signed up again,” says Cheryl Chauncey, instructional technology facilitator and an Apple-certified teacher at North Rowan Middle School.

For her fourth time since 2009, Chauncey will swim on Labor Day’s “Take the Lake” event at Lake Waccamaw in Columbus County.

The annual swim dates to a tradition started by Lee Greer in the 1950s. It’s not really a race, but more of a challenge — the challenge to make it across the expansive bay lake.

Chauncey will tell you she sets no speed records. Back in her first “Take the Lake” in 2009, she came in next to last. She finished ahead of a 72-year-old man who swam the backstroke all the way across.

Chauncey also did the 4-mile swim in 2013. Each swimmer has an “escort” with them in a boat or kayak. For the third time this year, Chauncey will have her longtime partner, David Paglia, paddling in a kayak near her as she makes her way.

At Chauncey’s speed, the swim takes between three and four hours.

Chauncey grew up in Columbus County and said she always wanted to do the swim. She has one of her degrees from the University of North Carolina at Greensboro, and as she sat during the first day of an anthropology class and listened to her professor speaking, she told herself, “I really know that accent.”

The accent belonged to Laura Vick, the now retired daughter of the late Lee Greer. One conversation led to another and Chauncey ended up taking the four-hour drive back to Columbus County for her first Labor Day swim in 2009.

“I always wanted to do it, and my mom still lived in the area,” she says.

Plus, Chauncey is a good swimmer.

“I teach swimming and have been teaching swimming since I was 11,” says Chauncey, a certified American Red Cross water safety instructor who in the past has been a swim coach at Lexington High School and swim instructor at N.C. A&T University.

Chauncey has a pool in her back yard at home and gives private swimming lessons.

“My thing in teaching people to swim is getting them over that fear,” she says. “My mother is deathly afraid of the water. I like to teach people who are afraid.”

At the end of the Take the Lake swim, Vick is positioned on the shore, and she gives out Lee Greer medallions to all the finishers.

Those medallions also are good for a free dinner at a local seafood restaurant.

Buoys are set out in the lake to keep swimmers on course and to mark every fourth-of-a-mile interval. Chauncey will stop on occasion, tread water and retrieve a banana and peanut butter snack — the potassium is good to avoid cramps.

Chauncey has been training better for this swim. Since February, she has been involved in the 100-mile challenge at the Lexington YMCA. She records her laps and has reached 68 miles so far.

Living in High Point, she stops to swim at the Lexington Y on her way to school in the mornings or on the way home in the evenings.

That first swim in 2009 proved to be difficult because a storm blew up. Her escort boat was swamped. “It had to go in, and someone else had to watch me,” Chauncey says.

Lake Waccamaw usually is calm and flat. That day, there were 2-foot swells, she claims.

Chauncey is keeping a watchful eye on the weather for this year’s swim, which has an 8 a.m. start Monday. The hurricane pushing toward Florida could have an effect.

The 4-mile Take the Lake swim is part of a fitness weekend, which often includes six-mile paddles around the perimeter of the lake, walks and biking.

Chauncey just intends to swim — and she also took advantage of a free pasta dinner Friday night at a Methodist Church in Columbus County.

The number of participants in the 4-mile swim can vary widely. One year, Chauncey says, she participated with only 10 other swimmers; another year, there were 28.

Back at North Rowan Middle School. Chauncey has been busy deploying all of the school’s iPads to students for the new school year. “The kids will tell you I’m the iPad lady,” she says.

Students, beware. Chauncey could be a little tired and sore when she returns to school this week.

“Normally, I want to sleep a couple of days,” she says.