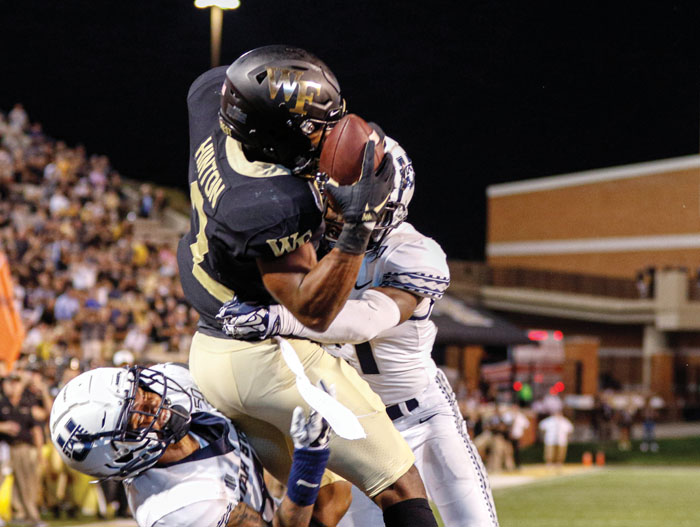 By JOEDY McCREARY AP Sports Writer
WINSTON-SALEM (AP) — Wake Forest tried and failed three times to hammer its way into the end zone for that one final yard it needed.
So with one last chance, the Demon Deacons’ quarterback of the future threw to their quarterback of the past.
Jamie Newman hit Kendall Hinton with the go-ahead 2-yard touchdown pass on fourth down with 1:08 remaining, and Wake Forest held on to beat Jordan Love and Utah State 38-35 in the opener Friday night.
“It’s a testament to our toughness,” Newman said. “We keep fighting to the end. That’s what our identity is. Deacon tough.”
Newman finished with three touchdown passes, and in the final moments he hit Sage Surratt with a 70-yard throw to the Utah State 1-yard line.
Cade Carney, who finished with 105 yards rushing, lost 1 yard on three straight runs up the middle.
On fourth down, Newman looked right for Hinton. The fifth-year senior — who started four games at quarterback from 2015-17 before switching positions a year ago — outjumped two Utah State defenders for the ball.
“Who doesn’t want to be in that position? Fourth down, last play and you get the chance to make a huge play,” Hinton said. “It was an awesome opportunity, a great ball and we made it happen.”
It helped the Demon Deacons earn a wild win that featured a combined 1,175 total yards, 53 first downs and 73 points.
Newman, who beat out Sam Hartman for the starting job during preseason camp, had earlier touchdown passes of 22 yards to Surratt and 9 yards to Scottie Washington and finished with 401 yards passing.
Love, who’s being promoted by Utah State as a Heisman Trophy candidate, was 33 of 48 for 416 yards with three touchdowns. He threw touchdowns of 27 yards to Jordan Nathan, 17 yards to Siaosi Mariner and 56 yards on a catch-and-run to Deven Thompkins.
“It went down to, really, the last play, I suppose,” Utah State coach Gary Andersen said. “I’m proud of this team.”
Love led the Aggies to the Wake Forest 31 in the final minute before Justin Strnad intercepted his final pass with 17 seconds to play — his third interception of the game.
Jaylen Warren rushed for 141 yards with a 4-yard touchdown and Gerold Bright added a 7-yard score for Utah State.
Surratt had 158 yards receiving, and Christian Beal-Smith added a 12-yard scoring run for Wake Forest.
THE TAKEAWAY
Utah State: Love mostly lived up to the Heisman buzz, leading an offense that rolled up 596 total yards despite returning only two starters from a year ago and making several highlight-reel plays. But those three interceptions — especially the last one — will sting.
“Jordan Love is everything you would want in a quarterback,” Andersen said.
Wake Forest: The Demon Deacons knew nothing would come easy in this one against Love. But one item of concern: The offense turned it over on downs twice inside the Utah State 5 and came up empty on three straight rushes after the long pass to Surratt. Still, they
“In a lot of ways,” Clawson said, “I thought Utah State outplayed us.”
STAR WATCH
Newman has started five games in his career at Wake Forest — and has led three game-winning drives in fourth quarters. He rallied the Demon Deacons past North Carolina State last November and led the comeback against Memphis in the Birmingham Bowl. As Surratt replaced Newman in the postgame interview room, he called his quarterback “Mr. Two-Minute”
PLAY OF THE NIGHT
Utah State used a gem of a catch by Mariner to take the lead with 25 seconds left in the half. Love lofted a third-down pass toward the back corner and Mariner outjumped Essang Bassey for it while getting the toes on his right foot down inbounds. The officials initially ruled it incomplete before reversing that ruling during a review, and it put the Aggies up 21-17 at halftime.
STAT SHEET
Wake Forest averaged an FBS-best 82 plays in 2018 and the Demon Deacons are playing even faster this year. They hit the 82-play mark in the third quarter and finished with 105 — the third time under Clawson they’ve reached triple digits, according to Sports-Reference.com.
UP NEXT
Utah State: Plays host to Stony Brook of the FCS on Sept. 7.
Wake Forest: Visits Rice on Sept. 6 in the second of three straight Friday night games to open the season.
___
More AP college football: https://apnews.com/Collegefootball and http://www.twitter.com/AP_Top25