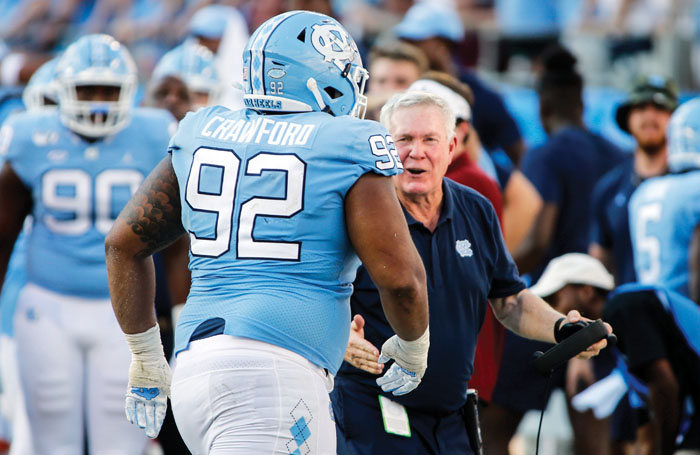 By STEVE REED AP Sports Writer
CHARLOTTE (AP) — Tar Heels coach Mack Brown knew that eventually he had to take the handcuffs off freshman quarterback Sam Howell.
With South Carolina stacking the box and daring the Tar Heels to throw, Brown decided he had no other option than to let Howell try to make some plays. Howell responded in a big way throwing for 245 yards and two fourth quarter touchdowns as North Carolina battled back from an 11-point deficit to beat South Carolina 24-20 on Saturday.
Howell led touchdown drives of 98 and 95 yards and connected on TD passes of 22 yards to Dyami Brown and 17 yards to Beau Corrales to give Brown his first win since 2013, when he coached at Texas.
“We were very conservative with Sam Howell around the goal line early,” Brown said. “And we felt like at halftime, he’s a quarterback, we have to turn him loose. And he played a tremendous second half.”
Conservative might be an understatement.
North Carolina ran 12 plays inside the South Carolina 25-yard line in the first half and 11 were runs. The only pass attempt resulted in a sack.
“We didn’t take any shots in the first half,” said Howell, the first true freshman to start a season opener in school history. “We kind of opened it up in the second half and our receivers made some good plays.”
Brown, who previously coached at North Carolina from 1988-97, was holding back tears as he was interviewed leaving the field after singing the school fight song with fans and raising his hands to them in victory.
“I don’t usually (do that) but I thought I should because they stayed, they were loud,” Brown said. “. … I wanted to tell them thank you.”
Later, Brown danced in the Tar Heels locker room.
So did his players, who erased the memory of so many close losses in years past.
The Tar Heels’ defense showed incredible resolve in the second half, and Myles Wolfork sealed the win by intercepting Jake Bentley twice on South Carolina’s final three possessions helping North Carolina register its first win over a power-conference opponent in a season opener since topping Indiana in 1997, Brown’s final season in his first stint at the school.
Bentley was limited to 142 yards passing.
“I was given every opportunity to win this game and I didn’t do it, so it hurts a lot,” Bentley said.
North Carolina did plenty of damage on the ground though, wearing down the Gamecocks with 52 carries resulting in 238 yards. Javonte Williams led the way with 102 yards on 18 carries.
“They are patient in their runs and we cut back and over-pursued,” said South Carolina coach Will Muschamp.
Clemson graduate transfer Tavien Feaster, who won two national championship rings with the Tigers and ran for 1,109 yards and 13 touchdowns over the past two seasons, ran for 72 yards and a touchdown for the Gamecocks.
THE TAKEAWAY
South Carolina: Muschamp will undoubtedly take some heat for his conservative decision to punt at midfield on fourth and 1 in the fourth quarter with his team leading 20-17. “We played the percentages there with our defense, but I was wrong,” Muschamp said. South Carolina’s offense gained 133 of its 270 yards on the game’s first two series. The Gamecocks had just 137 yards combined on their final 11 possessions.
North Carolina: The Tar Heels will need to learn to trust Howell more as they grow offensively. On the game’s first drive, the Tar Heels reached the Gamecocks 11 and ran it up the middle three times. On the third drive they ran a draw play on third-and-8 resulting in a three-and-out. And then late in the first half they ran the ball on third-and-goal from the South Carolina 8 instead of taking a shot at the end zone.
WHAT WAS THAT?
Brown’s debut was not without a few blunders, including one that could have cost his team the game.
With the Tar Heels leading 24-20 with in the final seconds, Brown wanted his freshman QB to take a snap and run around to burn off the final seconds on the clock on fourth down. Instead, Howell took an early snap and immediately went to his knee, stopping the clock with 11 seconds left and giving the Gamecocks the ball on downs — and one last chance to win the game from the North Carolina 47 on a Hail Mary.
Luckily for the Tar Heels, Chazz Surratt and Tomon Fox combined to sack Bentley on the game’s final play.
“We need to work on our victory formation,” Brown joked.
RETURN GAME WOES
The Tar Heels will need to clean up their special teams moving forward. They allowed a 60-yard kickoff return, a 38-yard punt return and had a field goal blocked. They also had a punt that travelled only 25 yards.
UP NEXT
South Carolina: Host Charleston Southern next Saturday.
North Carolina: Host Miami next Saturday. The Hurricanes lost 24-20 to No. 8 Florida in their season opener.
___
More AP college football: https://apnews.com/Collegefootball and http://www.twitter.com/AP_Top25