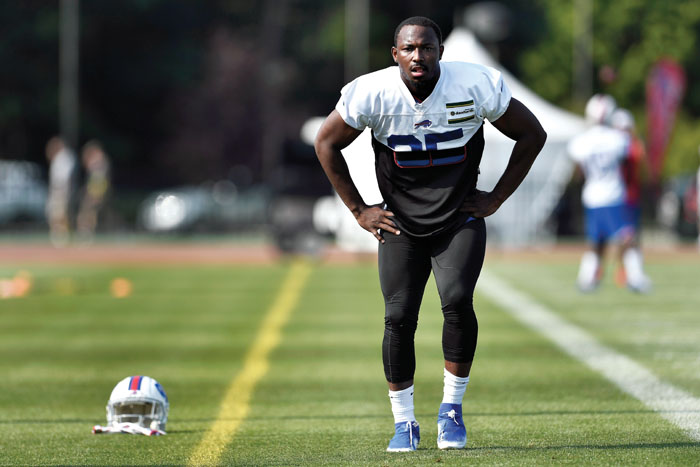 FILE - In this July 25, 2019 file photo, Buffalo Bills running back LeSean McCoy stretches during practice at the NFL football team's training camp in Pittsford, N.Y. A person with direct knowledge of the decision has confirmed to The Associated Press the Buffalo Bills have released veteran running back LeSean McCoy in a stunning move made as NFL teams set their 53-player rosters. The person spoke to The AP on the condition of anonymity on Saturday, Aug. 31, because the Bills have not announced the decision. ESPN.com first reported McCoy being cut. (AP Photo/Adrian Kraus, File)

By ARNIE STAPLETON AP Pro Football Writer
The cruelest day of the NFL’s long calendar arrived Saturday with teams setting their 53-player rosters.
Among the more prominent dismissals were Bills veteran running back LeSean McCoy, backup QBs Brian Hoyer in New England and Kevin Hogan in Denver and receivers Laquon Treadwell of Minnesota, Demaryius Thomas of New England and Josh Doctson of Washington a first-round pick in 2016.
“It’s always a hard day because … you ruin a lot of dreams,” Broncos general manager John Elway said. “It’s the hard part of the business.”
The cuts capped an interminable preseason that featured fewer stars than ever on the field with QBs Aaron Rodgers, Philip Rivers, Jared Goff and Carson Wentz taking not a single snap and other established stars preparing for the season through joint practices more so than in exhibition games.
The final weekend before the NFL kicks off its 100th season saw teams scrambling to get stars into their headquarters. The Seahawks were working to acquire Jadeveon Clowney from the Texans and the Cowboys were ramping up efforts to get holdout running back Ezekiel Elliott back in time for opening weekend.
The Texans were the busiest team in the league. They also acquired left tackle Laremy Tunsil from the Dolphins in a deal that netted them receiver Kenny Sills, a person familiar with the deal told The Associated Press. Houston also sent O-lineman Martinas Rankin to the Chiefs for RB Carlos Hyde.
Tunsil improves a line that allowed Deshaun Watson to get sacked an NFL-high 62 times last season.
Bills GM Brandon Beane cited the emergence of rookie RB Devin Singletary in the team’s surprising decision to cut the 31-year-old McCoy .
“It was very difficult,” Beane said. “I believed in LeSean the whole time and again, it was down to the last minute we decided to go in this direction.”
Another surprise cut by the Bills was veteran CB Captain Munnerlyn, who signed with Buffalo three weeks ago after E.J. Gaines was hurt. Munnerlyn had played for coach Sean McDermott in Carolina.
Overall, nearly 1,200 players were told they didn’t make the cut this weekend. Some will land with other teams and others will sign onto practice squads Sunday. But the vast majority of them won’t ever play professional football again, making way for another influx of college stars next April.
A remarkable streak continued in Indianapolis, where Andrew Luck provided the biggest stunner of the offseason by retiring last week. With TE Hale Hentges of Alabama making the team, the Colts have now had an undrafted player make the roster for the 21st consecutive season, a streak that began with Chukie Nwokorie and Terrence Wilkins in 1999.
For the 15th time in the past 16 years at least one undrafted college free agent made the Broncos’ initial roster. This time it was Nevada OLB Malik Reed and Colorado State ILB Josh Watson.
The Broncos need a backup to new QB Joe Flacco after cutting Hogan and rookie Brett Rypien. Elway said rookie Drew Lock (thumb) will go on IR Sunday with the hope he can return at midseason.
“We’re exploring all options” at quarterback, said Elway, adding RB Theo Riddick (shoulder) and TE Jake Butt (knee) will also go on IR.
In other notable moves:
—The Patriots released Tom Brady’s backup, Hoyer, who was beaten out by rookie Jarrett Stidham , a fourth-rounder from Auburn.
—Jaguars LB Myles Jack signed a four-year contract extension worth $57 million that includes $33 million guaranteed, a person familiar with the deal told the AP.
—The Falcons brought back 44-year-old K Matt Bryant after failing to find his successor in the preseason.
—Browns veteran P Britton Colquitt lost his job to an undrafted rookie Jamie Gillan, aka “The Scottish Hammer .”
—The Vikings jettisoned K Kaare Vedvik, whom they had acquired from Baltimore on Aug. 11 for a fifth-round draft pick.
—The Eagles released their two top rushers from last season: Josh Adams and Wendell Smallwood, and OL Stefen Wisniewski, the starting left guard for the 2017 Super Bowl championship team.
—Chargers fifth-round pick Easton Stick beat out Cardale Jones for the QB3 spot and fifth-year S Jaylen Watkins, who was thought to be safe after the injury to Derwin James, was a surprise cut, although he might go back once James is placed on IR.
—The Saints cut TEs Alize’ Mack, a seventh-round flyer from Notre Dame, and Dan Arnold, who dropped a TD pass in the NFC championship.
—The Giants waived QB Kyle Lauletta, a fourth-round pick a year ago.
—49ers RB Jerick McKinnon went on IR, meaning he’ll miss a second straight season after having complications in his recovery from a knee injury.
—Steelers undrafted OLB Tuzar Skipper made the roster after collecting an NFL-high five sacks in the preseason.
—The Jets cut third-round pick Jachai Polite, a pass rusher from Florida who was selected by previous GM Mike Maccagnan, who was fired a few weeks after the draft and replaced by Joe Douglas.
___
Follow Arnie Melendrez Stapleton on Twitter: http://twitter.com/arniestapleton
___
More AP NFL: https://apnews.com/tag/NFL and https://twitter.com/AP_NFL