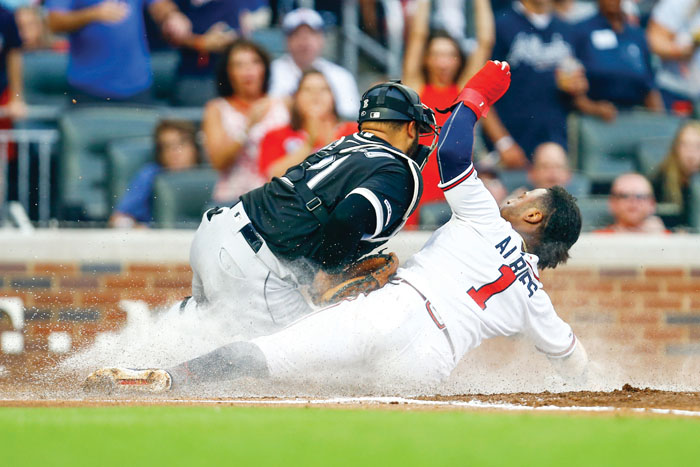 By CHARLES ODUM AP Sports Writer
ATLANTA (AP) — It was easy for Dallas Keuchel to remember his last RBI seven years ago. It was also his first.
Keuchel collected his first RBIs since his rookie season and held Chicago to two runs in six innings as the Atlanta Braves beat the White Sox 11-5 on Saturday night.
“It was Jake Westbrook in 2012,” Keuchel said, identifying the St. Louis pitcher who gave up his last RBI.
Keuchel then used dry humor to explain the long gap in production at the plate.
“I really haven’t had many guys on base in front of me, so it’s been really tough,” Keuchel said before cracking a smile.
Entering the game, Keuchel had driven in only one run — in his 2012 rookie season with Houston — in 63 career at-bats.
Keuchel spent seven seasons with the Astros before signing with Atlanta in June. The boost in at-bats in the National League had not been much help before Saturday night. He took a .115 batting average into the game but said he was proud to help the bottom of the lineup carry the load against Chicago.
“The bottom really did some damage tonight,” he said.
Billy Hamilton had a run-scoring double in the big inning. Rafael Ortega drove in a run with a single. Matt Joyce walked and scored in the inning.
Keuchel (6-5) earned his third straight win. He allowed nine hits but no walks.
The Braves knocked Reynaldo López out of the game with a six-run first inning that included Keuchel’s two-run single up the middle.
“What can I say? A really bad outing,” López said through a translator. “I think there is nothing else I can add. Just a really bad outing.”
López (8-12), who did not allow a hit in five innings in a win over Texas on Sunday, recorded only two outs in his shortest start of the season. He said dehydration issues, which shortened his last start, were not a factor.
The White Sox have lost five straight and allowed a combined 21 runs in losing the first two games of the interleague series with Atlanta.
Josh Donaldson hit his 33rd homer in the eighth off Kelvin Herrera, Chicago’s sixth pitcher.
Ozzie Albies singled and scored from first on Dansby Swanson’s double to left field to open the first. Albies slid under the tag of catcher Welington Castillo.
Chicago scored three runs in the seventh off right-hander Chris Martin to cut Atlanta’s lead to 7-5. The Braves answered with three runs in the bottom of the inning.
“We got it close and they just continued to attack,” said White Sox manager Rick Renteria. “They’re a good offensive club.”
Atlanta rested Ronald Acuña Jr. in an attempt to end his slump. Acuña drove in a run with a bases-loaded, pinch-hit fly ball to left field in the seventh.
TRAINER’S ROOM
White Sox: A welt immediately formed on José Abreu’s left arm after he was hit by a pitch from Keuchel in the fourth. Abreu, who also was hit by a pitch in his side in the third, remained in the game.
Braves: 1B Freddie Freeman, left the game in the sixth after he was hit by a pitch in his left foot in the second.
WASHINGTON STANDS UP FOR YOUNG
Braves third base coach Ron Washington, the former Texas Rangers manager, missed the game. Washington received permission to attend a ceremony at Texas to retire the No. 10 worn by former Rangers star Michael Young. Washington’s appearance was a surprise, and he received a standing ovation. Catching coach Sal Fasano filled in as the third base coach.
FREEMAN’S CATCH
Despite the sore foot, Freeman delivered the catch of the night in the third. He ran down Yolmer Sánchez’s pop fly in foul territory. Freeman juggled the ball before completing the catch and then turning to throw back to third base to prevent Eloy Jiménez from advancing from second.
ACUÑA’S SLUMP
Acuña’s batting average has dropped from .299 to .286 in 15 games since his last multi-hit game on Aug. 13. He was tied with Seattle’s Domingo Santana for the major league lead with 159 strikeouts.
UP NEXT
White Sox RHP Lucas Giolito (14-7, 3.20) will make his first career start and second appearance against Atlanta on Sunday in the final game of the three-game series. Giolito will face RHP Julio Teheran (8-8, 3.39), who lost his only career start against the White Sox in 2016.
___
More AP MLB: https://apnews.com/MLB and https://twitter.com/AP_Sports