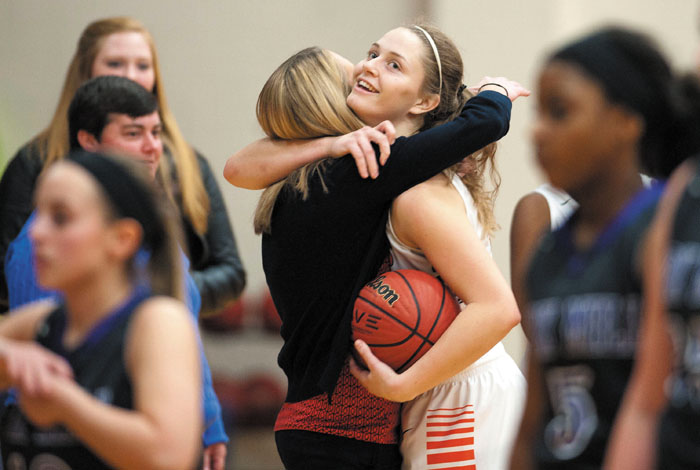 In addition to making a dramatic wardrobe transition in the last month, Allen, a 2015 Carson graduate and a 2019 graduate of the University of Lynchburg, is undergoing major life changes.

The 22-year-old is a rookie, lateral-entry English teacher at South and added head girls basketball coach to her list of duties last week.

Stacy Ellis coached South last season. The Raiders were 13-13 thanks largely to the efforts of All-State Janiya Downs, the leading scorer in program history. Ellis coached Downs in AAU ball and he thought highly enough of the current Catawba freshman that he commuted from Greensboro to coach her.

The original plan was for Allen to log a year or two as an apprentice, serving as a varsity assistant, but Ellis decided to step down recently.

So the the timetable for Allen has been moved up.

“It has been a little sudden, but they gave me several days to think about it and I really want to do it,” Allen said. “I’m a little nervous, but I’m a lot more excited than nervous.  I’ve known for a long time that I wanted to stay involved in sports and coaching is something I always thought that I’d do. I didn’t expect to be a head coach at 22, but I’m going to stay positive and keep an open mind about everything.”

South principal Kelly Withers has been a fan of Allen’s for years. Withers was the principal at Carson before moving over to South and has known Allen since she was a youthful phenom at Carson.

“I was able to witness her growth as a high school player and I followed her collegiate journey as well,” Withers said. “Her work ethic, her calm demeanor and her superior knowledge of the game were all evident throughout her career as a player. I have no doubt we will see the same characteristics in her career as a coach.”

Allen is better prepared to handle the challenge of being a high school head coach — that means dealing with referees, parents and media, as well as players —  than the average 22-year-old. She  was a “coach on the floor” a long time. She was always fundamentally sound as well as skilled.

She acquired well-rounded experience at Carson playing for coach Brooke Stouder. The 5-foot-10 Allen was marvelously versatile as a Cougar, playing all five positions at some point during her career. Her role switched every season depending on what Stouder needed, but she rose from first off the bench as a freshman to sophomore starter to starring role as an all-county junior and senior. She scored more than 1,100 points in her career and was so consistent she scored in double figures in 50 consecutive games. She averaged 16 points and nine rebounds as a senior and had a dozen  double-doubles.

“I can tell you that I loved Alex every minute of the four years I got to coach her,” Stouder said. “She’ll embrace this opportunity and work hard to be a really good coach. She’ll put her heart into growing South’s program. She’s a great person and she understands what it takes to be successful. She understands the importance of impacting the lives of her players beyond the basketball court.”

When she was making a decision about taking on the South job, Allen talked to Stouder, who was hired as a young head coach at Carson after just one season as South Stanly’s jayvee coach.

After some early growing pains, that hire worked out extremely well for Carson. Stouder’s advice to Allen was to seize the opportunity.

Playing college hoops at Lynchburg, Allen also collected a wealth of knowledge from longtime coach Abby Pyzik Smith. Allen didn’t much action her freshman season, but she was a contributor as a sophomore and a key performer as a junior and senior. She averaged 7.5 points and 4.5 rebounds as one of the team leaders as a senior. Three of the Lynchburg teams she played on won 20-plus games.

“Well, the first thing I found out when I got to Lynchburg was that I wasn’t in good enough shape for college basketball,” Allen said with laugh. “But I learned a lot from being part of the culture of Lynchburg basketball. When we took the court, we played with pride and passion. I had a great coaching mentor in college, as well as high school.”

Allen was active off the court in college, attending a host of meetings as vice president of the Student-Athlete Advisory Committee. She also worked on the school newspaper.

Her degree from Lynchburg was in sports management, so she still has to take some education courses to become a certified teacher. She’ll be able to take those classes locally at Catawba.

Allen is taking the reins of the Raiders at a challenging point in the program’s history. Neighbors Carson, West Rowan and Salisbury are very stout right now, while North Rowan and East Rowan have survived a building process and are on the upswing. It’s going to be a tall order for South to keep pace as it moves forward without Downs.

“We’re excited to have a young, energetic woman to lead our program,” Chrismon said. “The girls will connect with Alex as a fellow female and because she is fresh out of her college career. She has much to offer.”

Allen wasn’t hired to teach until well into the summer, so she wasn’t involved in any summer basketball activities. She’s just been introduced to the returning players and is getting to know them, but she already has a clear idea of what she hopes to accomplish in the years ahead.

“Sports impacted my life so much, so the chance to give something back through athletics means the world to me,” Allen said. “The goal is for the girls I coach to grow not just as players, but as people.”