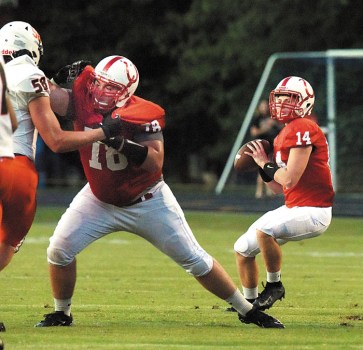 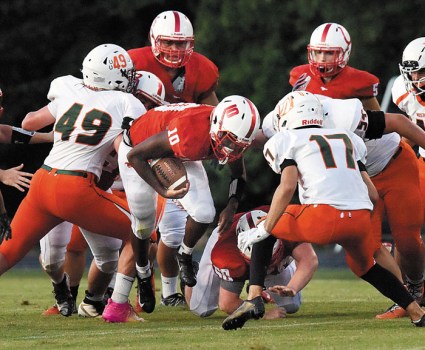 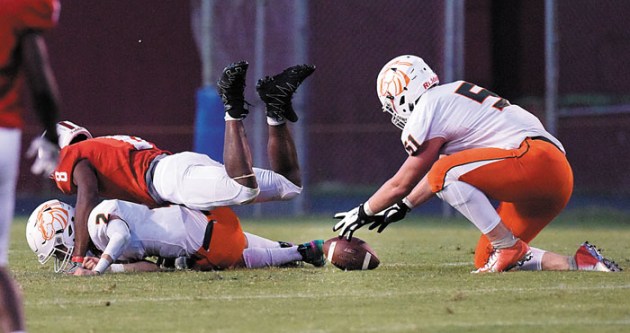 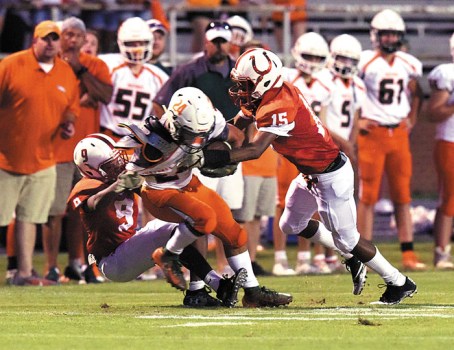 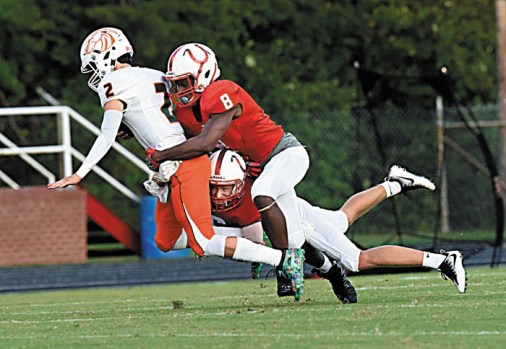 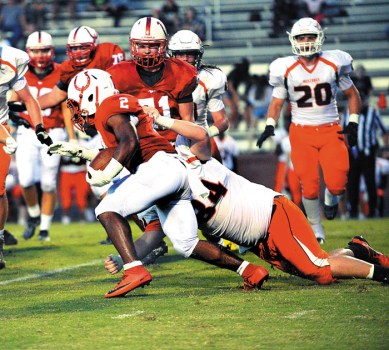 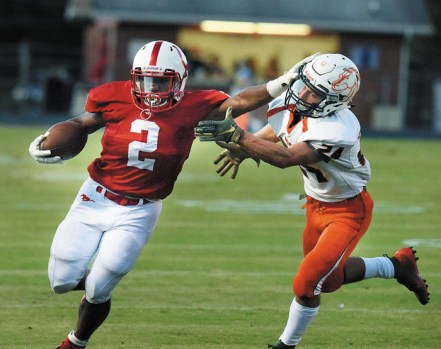 GRANITE QUARRY – East Rowan likely did not know what to expect from visiting East Lincoln on Friday night as the Mustangs from Denver were playing its season opener.

But the host Mustangs quickly found out East Lincoln was a superior team on both lines of scrimmage.

The result was a dominating, 41-20 win for East Lincoln (1-0) sparked by two quick scores to start the game, then a 28-point outburst in the third quarter. East Rowan (1-1) had its moments of success, but just had no answer for East Lincoln’s superior line play.

“To say they were quick is an understatement,” said East Rowan quarterback Logan Forbis, who had to run for his life numerous times and suffered three sacks for minus-25 yards. “We just have to learn from it and pick it up for next week.”

Winning head coach David Lubowicz had praise for his veterans on both sides of the line as they keyed a 486-to-283 total yards advantage. “We were excited about our big guys coming in with four of five returning on offense and two of three back on the D-line,” said Lubowicz. “We knew we were going to be good, but didn’t know what kind of condition we would be in. But we are very happy with what our front line did.”

On the defensive side, East Lincoln not only harassed Forbis, but focused primarily on East Rowan’s tireless running back, Sammy Pinckney. The sophomore runner had to fight and claw all night to gain 75 yards on 20 carries and did not reach the end zone. “Yes it was tough running out there,” Pinckney said. “but we just missed some assignments, so we will have to fix that on Monday at practice.”

With Pinckney stifled much of the night, East Rowan turned to senior Isa’ah Cauthen, who responded with 109 yards on 14 carries and a pair of touchdowns. But most of that came in the latter half of the fourth quarter when East Lincoln already had the game in hand.

East Lincoln’s dominance on the offensive line was on display right out of the gate, as they used the passing of senior quarterback Justin Barnett and running of Cole Barber and Lucas McConnell to drive 80 yards in 12 plays to go up, 6-0. McConnell closed the deal with a 2-yard run. After forcing a punt, East Lincoln then struck quickly on a 32-yard run by Barber then a 26-yard TD pass from Barnett to Jeremiah Jones — for a 13-0 lead.

East Rowan got untracked with a 77-yard drive of its own to close the gap. The scoring play came on fourth and 7 from the East Lincoln 28, when Forbis hit a leaping Vincent Jones in the end zone. It was the first varsity TD catch for the junior receiver. “Yes that was a good play,” said Jones. “We will look at it again on film Monday and see about using that one again.”

The score stood at 13-7 for the remainder of the first half, despite four possessions by each team. East Rowan stopped one East Lincoln drive with an interception by junior Tahj Young, his third of the new season.

East Rowan wasted a great opportunity late in the second period when a punt snapped was mishandled by East Lincoln, giving the home team possession at the 21. But Forbis was sacked at the 30, then a penalty brought up fourth and long. Forbis scrambled under pressure and misfired on the fourth-down pass.

East Rowan closed out the half with a 40-yard field goal attempt by freshman Cole Eagle. The kick had plenty of distance but sailed just left of the upright.

The close battle turned into a rout in the third period, as East Lincoln racked up four touchdowns in the frame, including two scores in about a minute and a half.

East Lincoln’s Barnett caught the defense flatfooted with a 60-yard scoring bomb to speedy Jeremiah Johnson to make it 21-7 at the 8:32-mark. On the next possession, Forbis was picked off by East Lincoln’s Jones, who returned it to the East Rowan 26-yard line. A pass interference call put the ball near the goal line Paulie Menegay scored from there to widen the lead to 28-7.

East Lincoln made it 35-7 at 2:32 of the period, when Barnett hit receiver Mikivi Phinx on a 32-yard fly pattern for the TD. The visitors closed out the big third quarter with a 38-yard run by Tre Burris, setting up a 6-yard TD by Askari Johnson. The extra point was blocked but the damage was done. It was 41-7.

East Rowan opened the final quarter with a 67-yard drive that ended with a 13-yard scoring run by Cauthen. The home team closed out the scoring with another long drive, capped by Cauthen’s 2-yard run.

East Lincoln’s Barnett finished the game with nine completions for 178 yards and the three TD passes. “I told him that shooters shoot and that is what he is, he’s a shooter,” Lubowicz said, of his quarterback. “He is a great kid and a heck of a leader.”

East Lincoln’s punishing ground game featured 10 different ball carriers out of the spread attack. Barber led the way with 89 yards while McConnell had 73. Forbis managed 97 yards and a TD pass for the night, while junior Jaden Thompson followed Cauthen and Pinckney in rushing with 42 yards on seven carries.

East Rowan will try to bounce back with a trip to South Rowan next Friday night, in a non-conference, county battle. East Lincoln, from the South Fork 2A Conference, will face Gastonia Ashbrook next Friday.

NOTES: It was the first ever meeting between East Rowan and East Lincoln. While coming off a 6-6 record last season, East Lincoln has been a dominating 2A team in the past six years, behind Chaz and Sage Surratt, with a pair of state championships and two runner-up finishes in the playoffs. … East Rowan senior receiver Cooper Wright had one catch in the game before departing with an apparent shoulder injury. A favorite target for Forbis, Wright missed most of last season with a broken collar bone. He watched the rest of last night’s game with his right arm in a sling.