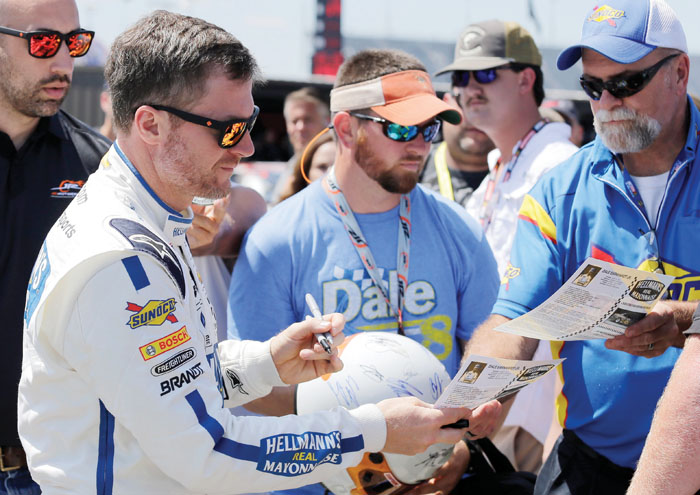 By PETE IACOBELLI AP Sports Writer
DARLINGTON, S.C. (AP) — A joyful Dale Earnhardt Jr. returned to the racetrack Saturday, finishing sixth in the Xfinity event at Darlington Raceway a little more than two weeks after he and his family escaped a plane that crash-landed in Tennessee and went up in flames.
The race was a welcome relief from thinking about the crash for Earnhardt and his family. He hopped in his car after kissing wife Amy and 16-month old daughter Isla, and his driving skills kicked in as he moved up from 14th place.
While Earnhardt was grateful for his showing, Denny Hamlin saw his win stripped away when his first-place car failed inspection. Second-place finisher Cole Custer was awarded the victory shortly after Hamlin, crew chief Ben Bashore and Joe Gibbs Racing executive vice president of Xfinity & Development Steve DeSouza left the podium.
But it was Earnhardt who stole the show, no matter who left with the trophy. He was cheered loudly by the crowd as he emerged from his car, partly because he was NASCAR’s most popular driver 15 straight times until his retirement two years ago and partly to shower him with affection following the horrifying events at the airstrip in Elizabethton, where he had flown to call the Bristol race as an analyst for NBC Sports.
“It’s just good to be at the track,” Earnhardt said. “I can’t count how many people give me a warm feeling when I see them at the track.
“This,” he continued, “is good therapy.”
Earnhardt’s glee was apparent when he told fellow retired driver-turned-broadcaster Jeff Burton, “I didn’t think I’d be this good.”
It was Earnhardt’s only race this season and his first since finishing fourth in Richmond almost a year ago. He hopes to drive at Homestead-Miami Speedway next March if car sponsor Hellman’s re-signs and “if they want to sell a lot of mayonnaise in Florida.”
Earnhardt stayed mostly off the grid since the Aug. 15 crash, a scary incident where Earnhardt, his wife and daughter, and two pilots ran from the flames after the crash landing. Even the Earnhardts’ dog was seen running from the wreckage. No one was seriously injured.
Earnhardt did not broadcast the race from Bristol as scheduled but kept his pledge to compete at Darlington.
He had soreness in his back and worried if it might feel worse after 200 miles at the track dubbed “Too Tough to Tame.”
About halfway through, Earnhardt remembered why he gave up full-time racing — especially at this misshapen oval.
He joked that the right side of his car seemed a bit closer to the wall than he remembered. He got hot in the late summer South Carolina heat and was regularly pressured by younger, hungrier competitors.
“I hit the wall every once in a while when I thought I was nowhere near the fence,” he said. “This is probably my final time around here. This place is too tough.”
Hamlin had won his previous five Xfinity races at Darlington after winning the pole. And he appeared to be successful Saturday despite starting from the back after damaging his primary car during Friday’s practice.
But NASCAR found his Hamlin’s car had improper ride height.
Custer said he didn’t win this way. “But we get the points, we get the money, we get the trophy, I guess,” he said. “It’s a way to win. I’ll take it.”
Hamlin sent out a Tweet moments after the announcement, using a curse word to condemn NASCAR’s “tech gods.”
He later tweeted that “car was a handling mess” that needed work to get competitive. He also congratulated Custer.
Wayne Auton, managing director of the Xfinity Series, said Hamlin’s car was found too low per specifications and the remedy was clear. Five of the six cars brought for inspection measured up to NASCAR’s standard, “and one did not,” he said.
Despite losing the victory, Hamlin was happy to see Earnhardt in the field and run well.
“He’s the people champ,” Hamlin said. “I think a lot of Dale and Amy and I’m proud he gets to come out here and still have fun.”
___
More AP auto racing: https://apnews.com/apf-AutoRacing and https://twitter.com/AP