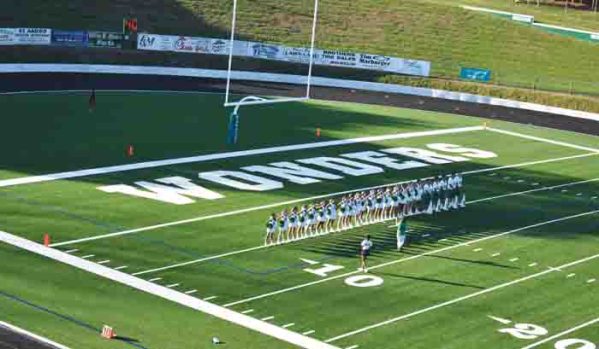 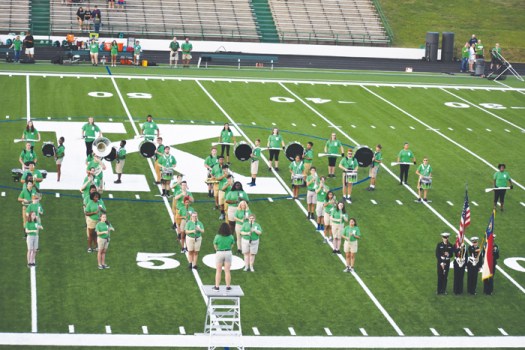 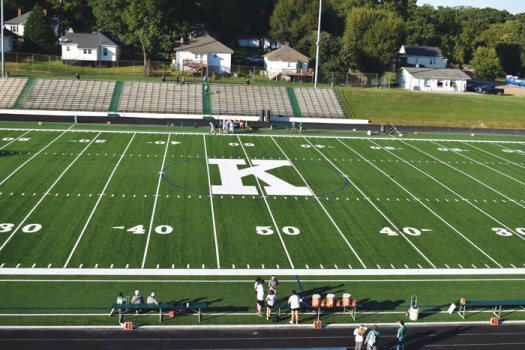 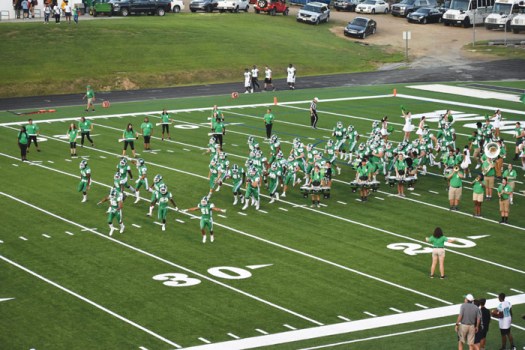 One week earlier, Thompson had looked out at the newly-installed artificial field turf in Memorial Stadium and “wondered” if the project would be completed in time to host Gastonia Ashbrook in the football season opener on Aug. 30.

“Obviously, it’s exciting to see both teams out there, warming up,” Thompson said, looking out over the field, pre-game music blaring in the background. “It’s an opening game and we’re just blessed to be able to play in a nice facility like this.

“But, yes, it is a relief for sure,” he continued. “Last Friday morning, if you would have asked me that question, I wouldn’t have had a true answer in terms of whether we were going to be able to get this game in or not. But when the project manager arrived here that afternoon, he was excited about the progress and even though it looked like a lot of work left to me, he knew what he was talking about.”

What Thompson saw on Aug. 23 was a blank field, so to speak. The turf was down, and there were white lines every five yards, but nothing else. There were no numbers or hash marks, nothing in the end zones, no soccer lines — and no giant “K” on the 50-yard line.

During the past week, Thompson watched in amazement as Medallion finished the job.

Thompson explained that workers would literally cut a piece of white turf in the shape needed. The team nickname, “Wonders,” is spelled out in the end zone. So the “W,” for example, was sewn into the space where the same size green piece of turf was cut and removed. And so forth and so on, for the numbers, hash marks and even the iconic “K” in the middle of the field.

“It’s a pretty amazing process,” said Thompson. “I had never seen it done, either. Most people think everything is just painted on, but there’s no paint involved. Everything is sewn in.”

Thompson, an A.L. Brown alum himself, has worked at the school for 21 years. He’s the baseball coach and added the AD duties in 2017. He said that that the field turf is a great addition to Memorial Stadium, built in 1958 and has seating for 7,500 fans, larger that most high school stadiums in the area. If needed, another 4,000-5,000 fans can fit on the grass bank of the stadium’s bowl, according to Thompson.

“There’s been no real upgrades to the stadium in a while, other than painting and upkeep,” said Thompson. “But this stadium has a lot of character and has not needed a lot of change. It has more character than most stadiums and we’re proud of it. And this field makes us even more proud.”

Thompson added that the new field turf will be great, not just for the football and soccer teams at A.L. Brown, but for the community in general. He said that the school will entertain the possibilities of middle school teams and youth leagues playing on it, as well.

And on bad weather days in the winter and early spring, the turf can benefit A.L. Brown’s other athletes as well.

“I coach baseball and if there’s a time which nobody’s on it and our field conditions are not great, we can still go out there and do some baseball or softball related things — and not have to worry about mud and any of that,” said Thompson.

And cost savings? “It will be better on the wear and tear of uniforms, not to mention the manpower and resources that it takes to care for a natural grass surface,” added Thompson.

The estimated cost of the project is in the neighborhood of $850,000, and the funding was called a “team effort” by Thompson. “There were quite a few people involved in it,” he explained. “We’re just grateful to everyone who contributed to the cost of the project. We feel grateful to be able to do something of this magnitude.”

So it’s done. The Wonders christened the new field Friday night, with a 28-6 victory over Ashbrook, in front of another big crowd at Memorial Stadium.

The boys soccer team gets its first chance on the surface on Tuesday against Carson at 6 p.m.

And the next big project at A.L. Brown?

“Let’s just enjoy this for a moment,” a relieved Thompson exclaimed, with a laugh.