Quotes of the Week: ‘Your story could save a life’ 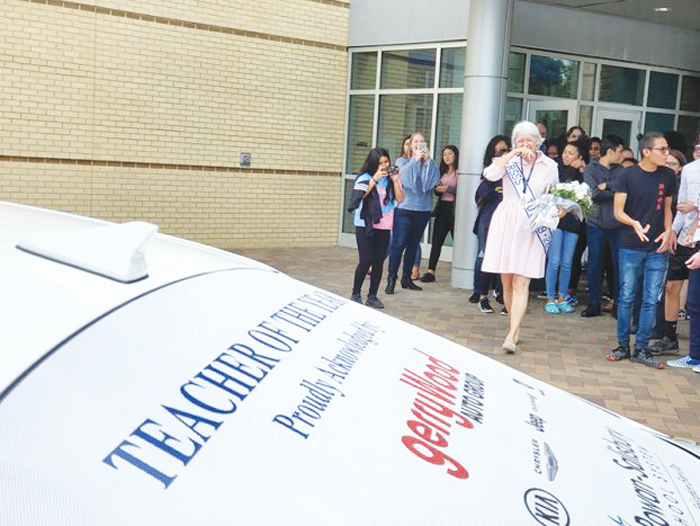 Theresa Pierce walks toward the car she will have use of as Teacher of the Year for Rowan-Salisbury Schools. It’s the second time she’s won the award. Josh Bergeron/Salisbury post file photo

“Every kid. Every subject. Every day. Everything matters to that kid. How can we help them become employed, or enlisted or enrolled?”

— Theresa Pierce, a teacher at Rowan County Early College and the district’s Teacher of the Year, on how the schools should approach its renewal status, which gives it flexibility in curriculum, staffing and calendar

— Shonda Hairston, principal at Knollwood Elementary School and the school system’s Principal of the Year, on the opportunities presented by the district’s renewal status

— Hunter Courtney, a running back for Carson High School who rushed for that many yards in a 56-20 win over South Rowan last weekend

— Steve Yang, coach of the Rowan County Little League softball team, who appealed on Twitter to President Donald Trump to invite his team to the White House to celebrate its World Series championshop after Trump had already invited the Little League baseball champions, a team from Louisiana

“It’s all about choices. We have to continue to be as frugal as we can with our money, but at the end of the day, we have to make sure our schools are operational.”

— Anthony Vann, assistant superintendent of operations for Rowan-Salisbury Schools, on the millions of dollars in maintenance costs the district faces for aging schools

— Jenny Lee, executive director of Rowan County United Way, on the Sept. 21 “Into the Light” program and fundraiser to raise awareness about suicide and mental illness

Leonard Pitts: Cruelty is the point, but are practices…