Memories made: An end of an era as Intimidators play final game at stadium

KANNAPOLIS — After 25 seasons at the Moose Road stadium, fans of the Kannapolis Intimidators watched the team’s final game there Thursday night. 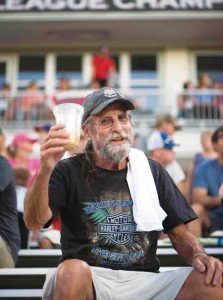 When the new season starts in April, the Intimidators will throw out the first pitch in a new stadium in downtown Kannapolis.

It is not a goodbye, as Trevor Wilt, the Intimidators’ radio announcer, says.

The final game was a true culmination of all the seasons played at the stadium. It was an emotional and bittersweet day for General Manager Matt Millward.

A mix of season ticket-holders, first-time attendees, lifelong fans, families and couples crowded the stadium Thursday night to watch the final play of the season and remember first dates, marriage proposals, teaching their kids a love for baseball and a summer-long family reunion.

As fireworks erupted in the stadium, Louis Armstrong’s “What a Wonderful World” played, a fitting song with lyrics that celebrate “the colors of the rainbow, so pretty in the sky” and sentiments such as “I see friends shaking hands, saying how do you do,” according to Millward.

Mike Downs, the Cabarrus County manager, and Mike Legg, the Kannapolis city manager, changed the countdown number from 1 to 0 in the sixth inning. For every game this season, a prominent fan, a former coach or someone with the White Sox — the major league team with which the Intimidators are affiliated — came to change the countdown number.

The atmosphere of the Moose Road stadium will transfer to the new downtown home, Millward said.

“This is a taste of what’s to come every night,” he said.

Along with a new stadium, the minor league team will get a new name and Timmy the gator, the current mascot, will retire and return to the lake, said marketing director Blair Jewell.

The team’s new name will be announced Oct. 23 at the Gem Theatre.