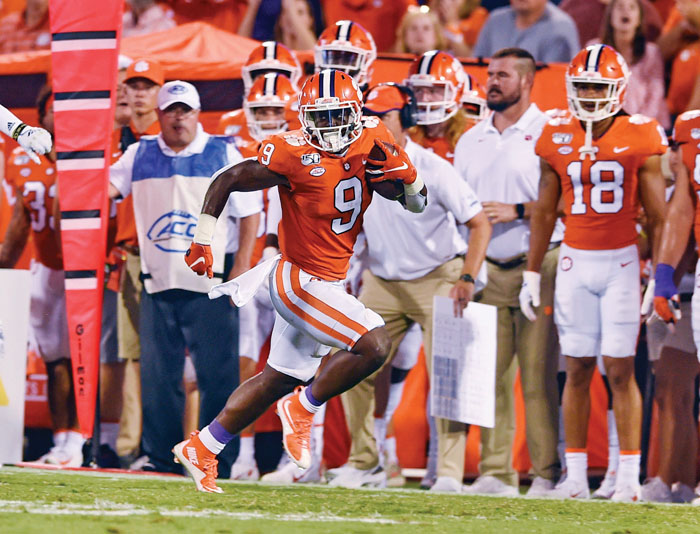 Clemson's Travis Etienne runs down the sideline for a 90-yard touchdown during the first half of the team's NCAA college football game against Georgia Tech on Thursday, Aug. 29, 2019, in Clemson, S.C. (AP Photo/Richard Shiro)

By PETE IACOBELLI AP Sports Writer
CLEMSON, S.C. (AP) — Travis Etienne ran for a career-high 205 yards and three touchdowns, including one from 90 yards out, and No. 1 Clemson overpowered Georgia Tech 52-14 Thursday night for its 16th straight victory.
On an offense filled with stars, it was Etienne who shone brightest for the defending national champions. His 90-yard score tied for the longest rushing TD in Tigers history. Etienne added scoring runs of 14 yards and 48 yards as Clemson opened a 35-0 lead and was never pressed by the Yellow Jackets in the season opener for both Atlantic Coast Conference teams.
It was not the flashy return that most of college football expected out of Clemson quarterback Trevor Lawrence. The 6-foot-6 sophomore, so poised and polished in leading the Tigers to a 15-0, title-winning season, threw two interceptions in the first half. Lawrence had just four picks all last year.
Still, Lawrence had his moments. His hustle after a bad interception knocked defensive back Tre Swilling out of bounds at the Clemson 3, and the Tigers defense kept the Yellow Jackets from scoring. Lawrence opened things with a 6-yard rushing score and threw a perfect pass to Tee Higgins for a 62-yard touchdown.
Lawrence finished 13 of 23 for 168 yards.
Clemson’s defense, which lost eight starters including its starting line of Dexter Lawrence, Austin Bryant and All-Americans Clelin Ferrell and Christian Wilkins, had two fourth-down stops in the first half.
Georgia Tech, changing its offensive and defensive styles under first-year coach Geoff Collins, struggled on both sides. It committed four turnovers and gave up more than 500 yards of offense.
THE TAKEAWAY
Georgia Tech: The Yellow Jackets have some work to do to get all the option out of their system. Many of their offensive plays, especially in the first half, looked like the quarterback runs of former coach Paul Johnson.
Clemson: There were sloppy moments on both sides of the ball. But performers like Etienne, Lawrence and Higgins overshadowed any problems the Tigers might have.
POLL IMPLICATIONS
Clemson came out fast and never let up. Expect the Tigers to remain No. 1, no matter how many points No. 2 Alabama or No. 3 Georgia hang on opponents this weekend.
UP NEXT
Georgia Tech hosts South Florida on Sept. 7.
Clemson remains at home to face No. 12 Texas A&M on Sept. 7.
___
More AP college football: https://apnews.com/Collegefootball and https://twitter.com/AP_Top25

Memories made: An end of an era as Intimidators…