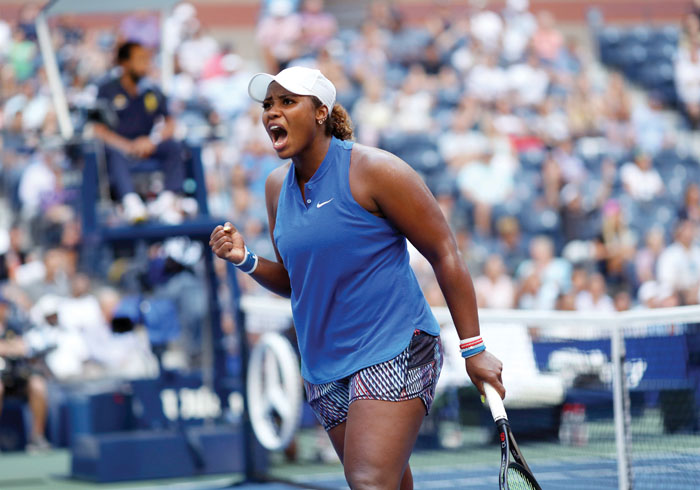 AP Photo/Kevin Hagen... Taylor Townsend, of the United States, reacts after scoring a point against Simona Halep, of Romania, during the second round of the US Open tennis championships Thursday, in New York. Townsend, just 23 years old, defeated Halep, a two-time major champion, 2-6, 6-3, 7-6 (4).

With an entertaining, net-rushing, serve-and-volleying brand of lefty tennis, the 23-year-old Townsend — a qualifier ranked only 116th — came back to edge Halep 2-6, 6-3, 7-6 (4) in the second round at Flushing Meadows.

Townsend was marked for greatness long ago: She was the singles and doubles junior champion at the 2012 Australian Open, turned pro later that year at age 16, then cracked the top 100 in the rankings while still a teenager. But there have been plenty of ups and downs since, including a drop out of the WTA’s top 300, a 9-16 record at Grand Slam tournaments and an 0-10 mark against top-10 foes.

Until Thursday, that is. Halep was seeded No. 4 at the U.S. Open and coming off a title at Wimbledon last month.

“I mean, this means a lot. It’s been a long journey,” Townsend said, her voice cracking as tears flowed. “Just haven’t been able to get over the hump. This match means so much and it gives me so much confidence to know I can do it.”

How did she do it? By moving forward at every opportunity, something so rarely seen these days on tour. She won the point on 64 of her 106 trips to the net; Halep went 6 for 10. And Townsend serve-and-volleyed 61 times, Halep once.

“When I’ve played her before, I was just trying to make balls (in). I think I played not to lose,” said Townsend, who had lost all six previous sets they had contested. “And today I played to win.”

It was an attention-grabbing result on a busy day at the year’s last major tournament, with all but nine of Wednesday’s scheduled singles matches carried over because of rain. The weather was just right Thursday, and so result after result poured in.

Townsend now will try to get to the fourth round at a Slam for the first time. That’s where 15-year-old Coco Gauff went at Wimbledon, and she was supposed to play later Thursday for a shot to face defending champion Naomi Osaka next. Another U.S. teenager, Caty McNally, pushed Serena Williams to three sets on Wednesday; 20-year-old American Sofia Kenin beat Williams at the French Open and is into the third round in New York.

Osaka moved on earlier Thursday with a couple of famous fans in her courtside guest seats: Colin Kaepernick and Kobe Bryant.

Kaepernick, the former San Francisco 49ers quarterback who three years ago began kneeling during the national anthem at his team’s games, has been working out in the New York area in hopes of getting another shot in the NFL. Bryant, the retired NBA superstar, came to the U.S. Open to promote a new book.

Osaka said this was the first time she’d met Kaepernick; she shares a sponsor with Bryant.

“It’s just funny to me,” Osaka said. “You know, like, last year compared to this year, there is no way, like, Kobe would sit in my box. Yeah, Kaepernick, too.”