Soccer star Lloyd willing and able to kick in the NFL 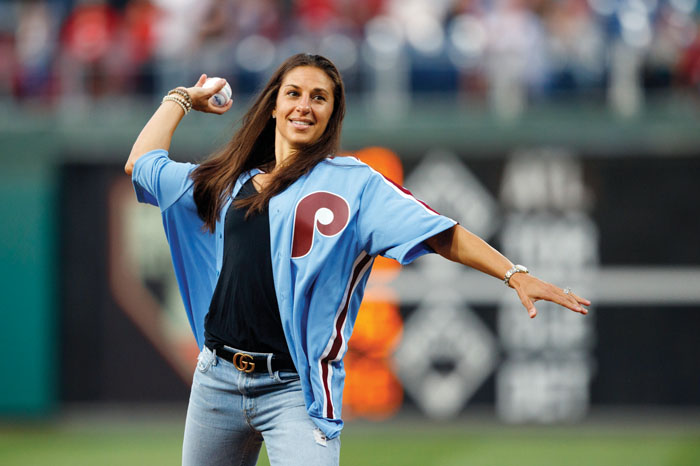 AP Photo/Matt Slocum ... U.S. soccer player Carli Lloyd throws out a pitch before a baseball game between the Philadelphia Phillies and the Pittsburgh Pirates, Tuesday, in Philadelphia. Lloyd says that she would like to try kicking in the NFL.

PHILADELPHIA (AP) — U.S. soccer star Carli Lloyd might be ready to get her kicks in the NFL.

Lloyd said she was considering potential offers to kick in the league after her recent 55-yard field goal at Philadelphia Eagles practice put the sport on notice. Lloyd did not name any teams that were interested in signing her.

“I was laughing about it with my husband at first. But now I’m sort of entertaining the idea,” Lloyd told NBCSports Philadelphia. “I think that I definitely could do it with the right practice and the right technique and get my steps down and figure all that out. I don’t want to go in there blindly. I want to actually attempt to do it. But I know that I definitely could do it because anything I set my mind to do, I can do it. And I actually do kick balls for a living. So, yeah, it’s all about the technique, and we’ll see what happens.”

Lloyd threw the first pitch Tuesday night before the Phillies played the Pirates. The World Cup champion U.S. women’s team is in Philadelphia to play Portugal on Thursday at Lincoln Financial Field as part of a victory tour.

Hunt, who will serve an eight-game ban for two physical off-field altercations in 2018 while he played for Kansas City, had a sports hernia operation Thursday — hours before the Browns played Detroit in their exhibition finale.

Hunt had been expected to play in what would have been his last game until his ban ends in November. The Browns said the 24-year-old is expected to be fully recovered by the time he’s eligible to return to their roster for the Nov. 10 game against Buffalo.

On Wednesday, the league said Hunt is not allowed inside the team’s facility during his suspension, which goes into effect Saturday at 4 p.m. The Browns had asked for an exemption so Hunt could be around his teammates while serving his penalty.

Hunt, who is from the Cleveland area, will now have to rehab his injury elsewhere.

The Browns signed the league’s 2017 rushing leader in February on the recommendation of general manager John Dorsey, who drafted Hunt in the third round in 2017 while he was Kansas City’s GM.

Hunt was punished by Commissioner Roger Goodell for violating the league’s personal-conduct policy following an investigation into the two incidents, one in which he shoved and kicked a woman during an argument in a hotel hallway in Cleveland where he was staying.

The Chiefs released him in the final weeks of their playoff push last season. The team was upset that Hunt had lied to them about his involvement in the incidents.

ORCHARD PARK, N.Y. (AP) — Buffalo Bills center Mitch Morse has been cleared to play a month after being placed in the NFL’s concussion protocol.

Morse was released from the protocol within the past day, general manager Brandon Beane said during the Bills’ preseason finale against the Minnesota Vikings on Thursday night.

The move comes after Morse spent much of the past two weeks being allowed to practice with the team, and puts him on track to play in Buffalo’s season opener at the New York Jets on Sept. 8.

Aside from the concussion, Morse sat out a majority of the spring sessions while recovering from surgery for a core muscle injury.

Morse was Buffalo’s key free-agent acquisition in the team’s offseason bid to overhaul what had been a patchwork offensive line. He was signed to a four-year, $44.5 million contract to become the highest-paid center in the league after spending his first four seasons with the Kansas City Chiefs.

Morse was diagnosed with a concussion five days into training camp on July 31.

It was the fourth documented concussion of Morse’s NFL career. He missed five games last season because of a concussion and had two concussions in 2015.

DENVER (AP) — The Denver Broncos are set to exercise late owner Pat Bowlen’s plan of succession after a judge dismissed a lawsuit filed by his brother.

Brittany Bowlen, 29, is planning to return to the team in a senior management position following her wedding in September, beginning a process she hopes will lead to her taking over as the franchise’s controlling owner.

After John Bowlen’s lawsuit was filed in October, the trustees asked the NFL to arbitrate the matter rather than the courts, and Commissioner Roger Goodell appointed ex-49ers executive Carmen Policy as arbitrator.

The Broncos are confident the league will rule in favor of the trust, which is in charge of selecting the next controlling owner of the franchise valued at more than $2.5 billion.

Pat Bowlen, who died in June at age 75, two months before his induction into the Pro Football Hall of Fame, had set up the trust several years ago, and the trustees ran the team after Bowlen stepped down in 2014 as he battled Alzheimer’s.

Beth Bowlen Wallace, 49, announced in May 2018 that she wanted to take over the franchise but the trust responded by saying she wasn’t “capable or qualified at this time.” Ellis later said Brittany Bowlen was the leading candidate among the owner’s seven children to take over the team, and last fall she announced her intention to pursue that position.

Brittany Bowlen, who spent a year as a business analyst for the team, is currently working for global consulting firm McKinsey & Company in Denver.

Ellis told The Associated Press at the start of training camp that Brittany Bowlen will join the team this fall in a rotating role generally focused on the business side.

“She’s got to prove herself,” Ellis said last month. “There’s more pressure on her than any other employee. And then we’ll see. If that works out, then there’s room for growth. Pat always said, ‘Listen, I’d love to be able to keep it in the family if I can and have a child run it, but if that’s not the case, then the team will be sold.’ And so we’re not there to assign anybody that role yet.”