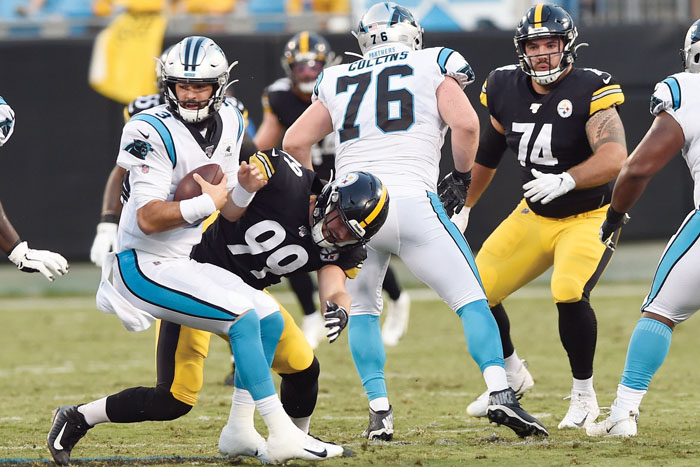 AP Photo/Mike McCarn ... Pittsburgh Steelers’ linebacker Christian Kuntz (99) moves in to sack Carolina Panthers quarterback Will Grier (3), during the first half of an NFL preseason game in Charlotte on Thursday night. The Panthers won the game, 25-19.

CHARLOTTE (AP) — Mason Rudolph and Kyle Allen turned in solid efforts and appeared to solidify their No. 2 quarterback roles for their respective teams in the Carolina Panthers’ 25-19 preseason win over the Pittsburgh Steelers on Thursday night.

Pittsburgh’s Rudolph continued to outperform Josh Dobbs, completing 7 of 11 passes for 125 yards, including a 31-yard touchdown pass to Johnny Holton. The second-year quarterback from Oklahoma State led three drives resulting in a touchdown, field goal and a missed field goal to give the Steelers a 16-10 halftime lead.

Dobbs started, but both of his possessions came up empty and he finished 3 of 5 for 21 yards for the Steelers (3-1).

Allen has been Cam Newton’s presumed backup in Carolina, starting three of four preseason games, and there was no reason to believe anything has changed in Ron Rivera’s mind. Allen led one drive, completing 4 of 6 passes for 41 yards while showing good pocket presence and the ability to escape pressure by slipping out of the backfield for a 13-yard run and a first down. The drive ended in a missed field goal.

Rookie Will Grier played the remainder of the first half for Carolina (2-2) and had mixed results.

The third-round pick from West Virginia completed 11 of 18 passes for 189 yards, including a 34-yard touchdown to Aldrick Robinson. However, he also was the victim of a strip-sack by linebacker Jayrone Elliott, who returned the fumble 88 yards for a 7-0 lead. Grier continued to struggle with his decision making, tossing an interception along the right sideline, although there appeared to be some confusion over the route with intended receiver Jaydon Mickens. It was Grier’s third pick of the preseason.

Taylor Heinicke, last year’s No. 2 quarterback, has been fourth on the depth chart throughout the preseason. He completed 7 of 10 passes for 89 yards and two touchdowns, and a 2-point conversion pass to lead Carolina’s second-half comeback.

Both teams rested their starters and many of their top reserves.

They’re long shots to make their respective rosters, but wide receivers DeAndrew White of Carolina and Holton of Pittsburgh put some good plays on tape that should only help their NFL careers moving forward.

White, a second-year player from Alabama, had four receptions for 94 yards, showing some crafty moves after the catch, juking several defenders. Holton, in his third season out of Cincinnati, had three catches for 86 yards and the 31-yard TD catch and displayed an ability to create separation from opposing cornerbacks.

Steelers: Visit the defending Super Bowl champion Patriots in their regular-season opener on Sept. 8. That is a Sunday night game.

Panthers: Host the Rams in the regular-season opener on Sept. 8.