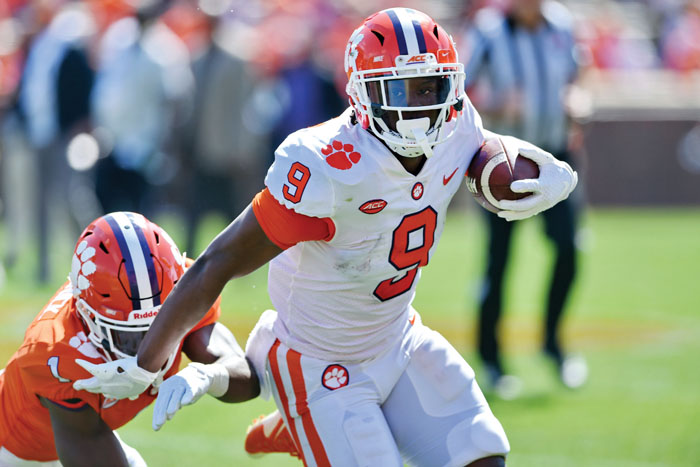 AP Photo/Richard Shiro, File ... Clemson’s Travis Etienne (9) is one of three Clemson Tigers selected an AP preseason All-American along with quarterback Trevor Lawrence and linebacker Isaiah Simmons. The three lead the Tigers in their opener tonight against Georgia Tech.

Inexperienced Clemson defensive front against Georgia Tech’s new, non-option offense. The Tigers lost all four of starters up front (Clelin Ferrell, Christian Wilkins and Dexter Lawrence were all first-round NFL draft picks) and three of those spots were game-time decisions. The Yellow Jackets enter the season in a non-run based attack for the first time in 12 seasons under new coach Geoff Collins.

Clemson: Quarterback Trevor Lawrence helped the Tigers take flight after he was named the starter in week five as the offense averaged better than 45 points a game the rest of the way. Lawrence finished with 3,280 yards and 30 touchdowns passing last season.

Clemson has not hosted a Thursday night game since 2013 and that was also against Georgia Tech, a 55-31 Tigers’ win … Georgia Tech’s first-year coach Geoff Collins is nicknamed the “Minister of Mayhem” … The Aug. 29 game  is the earliest start in history to a Clemson season … Clemson sophomore receiver Justyn Ross is looking to tie a Clemson record with his third straight 100-yard receiving game. Two of the program’s five record-holders currently are NFL wideouts DeAndre Hopkins and Sammy Watkins … Georgia Tech has switched to a pro-style offense from the option attack run by former coach Paul Johnson. The Yellow Jackets have also changed to a 4-5-2 defensive scheme from their 3-4 scheme … Clemson has won its past four games over Georgia Tech … The game is the first one on the newly launched ACC Network.

Kelly enrolled at Auburn in January before deciding three months later to transfer to North Carolina to be closer to his home in Virginia. He had said his mother and sister were dealing with unspecified health issues, and UNC sought a waiver for immediate eligibility.

The Tar Heels open the season Saturday against South Carolina in Charlotte.

JACKSONVILLE, Fla. (AP) — Boise State and Florida State expect to make a decision Thursday about their season opener, which could be affected by Hurricane Dorian.

The neutral-site game is scheduled to be played Saturday night in Jacksonville, Florida. Dorian gained hurricane strength earlier Wednesday and is forecast to become a powerful storm in the next few days.

Officials could consider starting the game earlier Saturday or canceling it altogether.

Florida State says in a statement that “we continue to be in contact with the governor’s office, our partners in Jacksonville and Boise State’s athletics department. At this time, there is no change in the status of the game. We will provide an update Thursday morning.”

Crimson Tide coach Nick Saban said Wednesday Moses was injured in Tuesday’s practice and is “out for an indefinite period of time.” Saban says the loss is “certainly a character check for our team.”

Moses was likely the second-ranked Crimson Tide’s top defender after the loss of a number of standouts to the NFL, including inside linebacker Mack Wilson. Alabama opens the season Saturday against Duke in Atlanta.

Moses was a finalist last season for the Butkus Award given to the nation’s top linebacker. He led the team with 86 tackles.

The Tide had already another projected starter at inside linebacker, Joshua McMillon, to a preseason knee injury. That left freshman Christian Harris topping the depth chart going into the season at an already thin position.