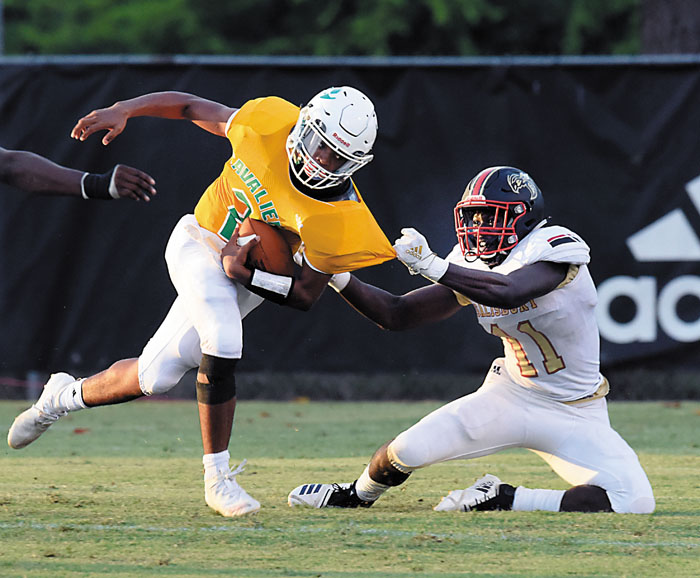 First, let’s talk about the weather.

The first week of the high school football season was a three-ring circus, with games contested across the state on Thursday, Friday, Saturday and Monday.

As it turned out, the shrewdest move locally was made by those who altered their schedule to Thursday competition. Friday proved to be a wash. Saturday worked out OK. Some in area conferences had to play on Monday — Statesville, Robinson, West Davidson, multiple Yadkin Valley Conference schools — and when that happens, it has to affect the next game. No one wants to play two football games in the same week.

As far as tonight’s football predictions, my knowledge is so limited that co-pickers have been enlisted. Scott Maddox, former coach and Salisbury-Rowan Hall of Fame committee co-chairman will offer his expert opinion, as will Marny Hendrick, who has been writing about sports for 45 years. I’ve known both of them since the 1980s thanks to the wonderful world of baseball card collecting, when all three of us were much younger and considerably smarter. Between the three of us, maybe one of us will be right each week.

The bad news is all of us project the same winners for tonight — East Rowan, West Rowan, Salisbury, A.L. Brown and Davie. Needless to say, those five teams are probably in trouble.

Opinion was split last week on who was going to win the Carson-South Rowan game — more fans were impressed with South, which played North Rowan close at the Rowan Jamboree, than with Carson, which was shut out by West Stanly. But then last Thursday, it was Cougars 35, Raiders 0 pretty briskly, and Carson was setting some records.

I’ll admit I didn’t expect Davie to beat Page last week. I did expect Salisbury to finally take North Rowan, but no one could have predicted the way it happened.

It’s an intriguing Week 2 ahead of us, for sure.  A week ago, West Rowan-North Rowan looked like the marquee matchup in the county, but now more people are buzzing about Carson-Salisbury because Carson and Salisbury are both 1-0, while North and West are 0-1. WSAT will be broadcasting the Cougars vs. the Hornets from Ludwig Stadium.

In other games, A.L. Brown introduces its new turf field, East Rowan plays at home after an impressive road victory, and Davie hits the road against a rival after a scintillating home opener.

South Rowan is off tonight and gets a chance to regroup after giving up 56 points. The Raiders return to action at home against East Rowan on Sept. 6.

Salisbury head coach Brian Hinson silently shook his head for the first 30 seconds of my visit to his office on Wednesday.

Coaches always fret that their players will make comments to reporters that will end up on a bulletin board somewhere, and Salisbury linebacker Jabril Norman had one of the most original (and greatest) comments of all-time for Post reporter David Shaw after the 9-7 win against North Rowan. No doubt it’s posted in China Grove.

“Our defense is official and certified,” Norman said.

“I just hope we can back that up,” Hinson said, trying hard to smile. “Carson is next, and I’m sure Carson has the state’s leading rusher after the first week of the season.”

No doubt. Carson’s Hunter Courtney had 346 yards on 38 carries last week. It’s unlikely anyone had a bigger game in the state.

However, Courtney did not have the biggest game in the world. A senior in Dalton, Ga., named Jahmyr Gibbs had 420 rushing yards and eight TDs on opening night.

The most famous — and best — game in the series was when Carson, coached by Mark Woody, beat Salisbury, coached by Pinyan, in 2010.  Salisbury won a state championship that year.

Carson thumped Salisbury 28-7  early in 2018, a result that looked stranger and stranger as the year went on. Carson went 3-8. Salisbury finished 7-5.

Salisbury mauled the Cougars 41-12 in 2017 for its most recent victory in the series.

Hampton once starred at West, while Nixon once had great success coaching at North, so there are all sort of ties.

On the field, both teams had plenty to be proud of defensively last week, but neither team scored an offensive touchdown. Both are breaking in new QBs. Maybe someone gets the offense untracked tonight.

The returning stars — North back Malcolm Wilson and West receiver Jalen Houston — did not make a major impact in the opening week. Wilson is roughly 300 rushing yards behind Courtney at the moment. Houston was not among the county’s top 14 in receiving yards in Week 1. Both of those things will change.

As far as the series, North still leads 28-24-2, although the Cavaliers haven’t beaten the Falcons since 2001.

Nixon has been nothing short of fantastic coaching in county games since moving from North to West for the 2015 season. While the Falcons have endured some struggles outside Rowan in recent seasons, Nixon’s teams bring it against county opposition and are 15-0 against North, South, East and Carson.

I won’t pretend to know anything about the East Lincoln Mustangs, who did not play last week. It should be an advantage for East Rowan that it already has played a game.

East Rowan has never played East Lincoln, a solid athletic school in Denver, which is frequently very stout in basketball, among other things.

East did a lot of things right in the opener at North Stanly, displaying a balanced offense and a big-play defense and appears to have a good chance to match last year’s 2-0 start.

There were some anxious times for coach Mike Newsome a few weeks ago, but A.L. Brown’s new turf field is ready for its debut.

Neither team played in the opening week.

The schools own no regular-season history. The Wonders are 0-2 in playoff games against the Greenwave, losing early in the playoffs in 1987 and 2004.

A.L. Brown is eager to make amends for a 6-6 record last season and has some horses, led by receiver Jose Vargas and linebacker B.J. Foster.

This  may be the game of the night.

North Davidson thumped Davie in 2017 for its most recent win in the long-running series.

North Davidson is coming off a surprise defeat against Parkland, ND’s first loss to Parkland since 1988. Davie is coming off a triumph against Page that got dicey at the end after the War Eagles had things under control for three quarters.

Davie is talented. Running back Tate Carney has been offered by Wake Forest, while QB Nate Hampton (6-5, 225) has a couple of D-I offers, including one from West Virginia.