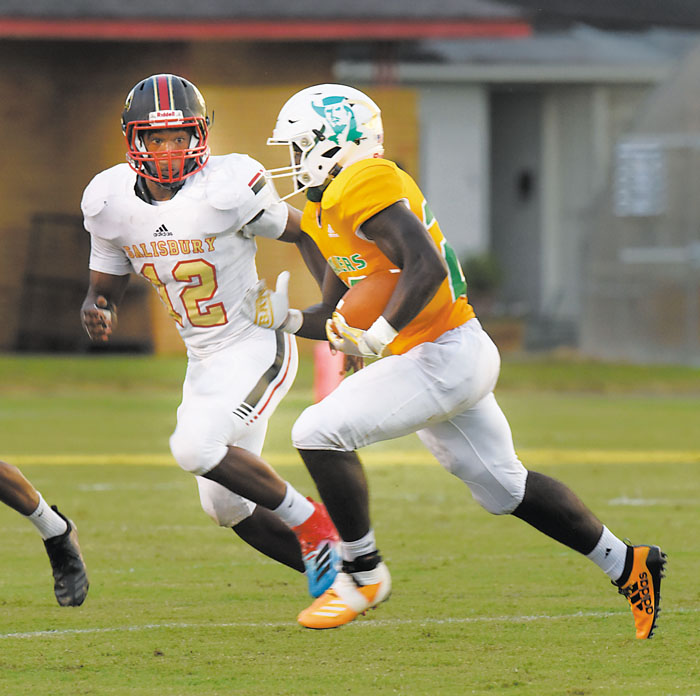 Wilson’s player of the year breakout as a junior was ignited by his 22 carries for 173 yards in a 20-7 victory on opening night against rival Salisbury, the Cavaliers’ sixth consecutive victory in a rivalry that has carried burning intensity for decades. The distance between the neighbors is less than five miles.

When North and Salisbury tangled at Ludwig Stadium in a game moved up to last Thursday by weather concerns, Wilson got 22 more carries. But the results were vastly different. This time he was limited to 45 yards by the fired-up Hornets, basically 2 yards per carry. Salisbury won 9-7.

“Obviously, if we were going to win against North, we had to stop Wilson,” Salisbury head coach Brian Hinson said. “He’s a great player … very talented. The game plan was to key on him and make someone else beat us.”

In the heart of Salisbury’s 4-2-5 defense was linebacker Jabril Norman, who has been one of the county’s stoutest defenders since he emerged as a reliable starter as a sophomore.

Only this is a little bit different Norman from past years. A college prospect, he’s beefed up from 180 to 195 pounds in the past year without subtracting any speed. He’s not only physical, he’s smart. He understands the geometry of the game, takes the proper angles of pursuit.

“I’ve played against Malcolm a long time, he’s always been a very good player, and North’s teams always have beaten my teams in middle school and in high school,” Norman said. “But this is my senior year and the game was supposed to be played at North, but then it gets moved to Salisbury. We all took that as a sign that it was time for a change.”

Norman was a finisher on Thursday — 15 tackles, with two coming in the North backfield — but Salisbury’s defensive effort started with the linemen.

“Going in, we thought that our defensive line against North’s offensive line was a matchup that should be in our favor,” Hinson said. “That turned out to be the case. Our guys upfront, they did their jobs, tied up Wilson’s blockers and allowed our linebackers to run free and make the tackles. Norman has a great knack for reading blocks and he plays very fast to the ball.”

“It wasn’t that hard to make a lot of tackles,” Norman said. “I’ve got some experience and you learn to read the guards, and let them tell you where the play is going.”

North’s only TD came on a Salisbury special-teams mishap.

“It was the first game, and you’re going to make some mistakes,” Norman said. “But I thought we were  well-prepared for everything North did. We practiced hard, and when you practice hard and then go out and execute what you’ve been practicing in the game, it’s an exciting feeling. I never felt like our defense didn’t have things under control. I was confident from the start and nothing made me lose that confidence.”

Salisbury had to deny North twice in the red zone in the third quarter, but the Hornets always got the stop — or the turnover — they needed.

Late in the game, with the Hornets trying to kill the clock and protect the lead, Norman found himself in a different role as a running back. Mike McLean, the former QB who figures to be the Hornets’ primary ball carrier this season, was fighting cramps.

“Running the ball feels pretty natural to me,” Norman said. “I enjoy it. Follow the block and hit the hole.”

Statistically, Norman’s offensive contributions were modest compared to his defense, but he provided stability and ball security. His six carries netted 20 yards. Each one erased precious seconds off the scoreboard clock.

“He’s a hard, downhill runner,” Hinson said. “In that situation, you need experience, and he helped us put the game away.”

Norman received his first college offer in May from Catawba.

“Catawba is a good school with a good coach, and it’s good to have that hometown option,” Norman said. “But there’s also a chance I could go off to school and have new experiences.”

If Norman keeps playing like he did against North, his future will be bright, no matter what he decides.