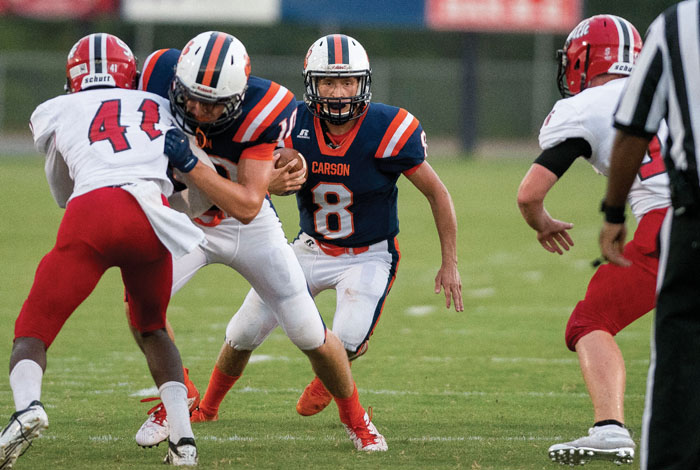 CHINA GROVE — Carson back Hunter Courtney wore jersey No. 8, but the number everyone will associate with him after Thursday’s 56-20 victory against South Rowan is 346.

All records aren’t available for every Rowan football game prior to school consolidation (late 1950s) and integration (late 1960s), but the 300-yard rushing game obviously is extremely scarce and figures to become even more rare in the modern era of pass-happy offensive football. Courtney’s was the 10th 300-yard outing in the Post’s record books.

The first 300-yard game recorded by the Post occurred in 1952. That was a 303-yard onslaught by Landis’ Bill Barnes against Rockwell. Barnes would become known as “Billy Ray” later in life. After  becoming the first ACC player to rush for 1,000 yards in a season at Wake Forest in 1956, Barnes would account for 38 touchdowns and more than 5,000 rushing and receiving yards in the NFL, mostly for the Philadelphia Eagles. He would appear in the 1957, 1958 and 1959 Pro Bowls.

The remaining eight outbursts have taken place since 2000. Cal Hayes Jr. is remembered mostly for what he did on baseball diamonds, but he had 344 yards against Concord’s J.M. Robinson in 2001, shortly after Robinson opened for business. That was a wild, penalty-plagued affair. Hayes actually got ejected.

Next, not surprisingly, came K.P. Parks, the county’s all-time rushing leader for a game, for a season and for a career. Parks had two 300-yard games — 339 against Northwest Cabarrus when he was a sophomore in 2007 and 356 against Carson in 2009 when West blasted the Cougars, 69-14. That 356 remains the county standard. Former West receiver Jarvis Morgan Tweeted Thursday that Parks would’ve had well over 400, if not for Morgan’s block in the back, which negated a long jaunt by Parks.

Carson’s Shaun “Bush” Warren never got his due because he played in the shadow of Parks, who was a national phenomenon in high school, but Warren was a tremendous back in his own right. He produced two 300-yard games in 2010, pounding Salisbury for an even 300 and rolling for 308 against Statesville. Warren’s game against the Greyhounds stood as the Carson record prior to Courtney’s monster game on Thursday.

The most recent 300-yard games before Thursday came in 2016. East Rowan’s Max Wall got 302 against Cox Mill, while North Rowan’s Jaleel Webster put up 302 against Lexington.

Which brings us to Courtney, who is in his third varsity season at Carson.

He’s lean and wiry, an athlete. He was third in the long jump and fifth in the triple jump in last spring’s Rowan County Track and Field Championships. He also ran a leg on Carson’s county-champ 4×400 team and the third-place 4×200 team.

“He’s undersized (5-foot-8, 152) for a running back,” Carson coach Daniel Crosby said. “But he has great weight-room numbers for someone his size and is one of the strongest we have pound-for-pound. And he has very good speed. We wants to play college football, although it would probably be as a slot receiver or cornerback.”

Courtney was on the verge of a breakout season as a sophomore. But on the same night he caught a 65-yard touchdown pass from QB Cole Sifford against East Rowan, he broke his leg.

“That kept me out about three months,” Courtney said. “But I was able to get back running again during indoor track season.”

Courtney was solid as a junior. Carson used three-back sets, and the workload was spread among Courtney, Jerry Cipres, CP Pyle. Michael Gonsalves and Evan Johnston. Courtney averaged 6 yards per carry and rushed for nearly 700 yards. He had 10 carries for 117 yards against East Rowan and careered with 13 carries for 142 yards against Statesville.

This season, Carson has joined the overwhelming trend toward spread offense. Most of the time, the Cougars will have one back and four receivers. That back is usually going to be Courtney.

“We didn’t go into the South game thinking Courtney was going to carry the ball 38 times or anything close to that,” Crosby said. “But this isn’t college football, where the offensive coordinator has got this long play sheet with something for every situation and for every down and distance. This is high school, and one of the things I learned from Coach Donnie Kiefer (at Central Cabarrus) is that you find out what stuff works really early. We had a handful of basic plays that were working against South, and we were going to stay with that until they stopped it. Courtney was very good, but the other part of what happened on Thursday was our offensive line really got after it.”

“We were well-prepared, knew our assignments and knew how to block their defense,” Barringer said. “If they stunted, if they sent a linebacker, we knew exactly what to do. Blocking is all about angles, and we’re well-coached to understand angles.”

There’s a giant board outside the Carson coaches’ room that lists about a dozen goals for the offense and defense for every game.

One of those goals is for the offense to score on sudden-change — scoring after the defense gets a turnover — and that opportunity presented itself when Pyle picked off a South pass at the Carson goal line to halt the Raiders’ opening drive.

On first-and-10 from the Carson 10, Carson’s very first snap, Courtney made a jab step to his left and then wheeled right, taking a handoff and firing straight ahead.

“It was basic power, and I saw the kick-out block and then I saw this huge ol’ hole,” Courtney said. “Then I just kept running. No one touched me.”

There was no linebacker to challenge Courtney in a gaping hole, and once he accelerated, he just ran past South’s DBs.  The last one made a futile dive at the South 35, and Courtney sprinted for a 90-yard touchdown.

“What happened there was due to great communication by Barringer and Maldonado on the right side,” Crosby explained. “They saw a linebacker stunting, they checked out of the blocking scheme we had, and then Hunter did the rest. Those guys on the 0-line did a great job, not only physically — they blocked to the whistle like we preach— but mentally. They helped us set the tone for the game early.”

Courtney had a 2-yard scoring burst to make it 21-0 late in the first quarter and broke a 73-yarder early in the second  quarter for a 28-0 advantage.

“Those guys blocked their tails off all night,” Courtney said.

“We hit some passes early, one over the middle to AJ Jackson and one for a touchdown to Jake Harris,” Crosby said. “That helped loosen things up for the running game.”

Needless to say, Courtney was Carson’s offensive player of the week, but Crosby liked the way he handled the sudden fame that a 346-yard night can bring. It didn’t change him any. He was back in the weight room early Friday morning.

“We’ll name our players of the week each week, but I think every one of these guys understands that the focus is never going to be about an individual,” Crosby said. “It’s about this team, and about this team being a family.”

Courtney sat down relatively early Thursday. He could’ve gotten more yards, could’ve broken a revered county record that was set by a legend — a mark that was assumed to be unbreakable.

But there were no regrets in the Carson camp. The Cougars are 1-0, and that’s where they want to be.

“The yards that he had were pretty crazy,” Barringer said. “We actually found out late in the game that he was close to a county record, but we’d taken the starters out by then and put our subs in. It wouldn’t have been right to put him back out there just to go for a record.”

Maybe it’s just the start of major things for Courtney, but the assignment gets tougher this week.

Carson plays at Salisbury (1-0). The Hornets had a tremendous defensive effort against North Rowan in Week 1.

“That’s a very fast, athletic defense,” Crosby said. “It will be a challenge.”