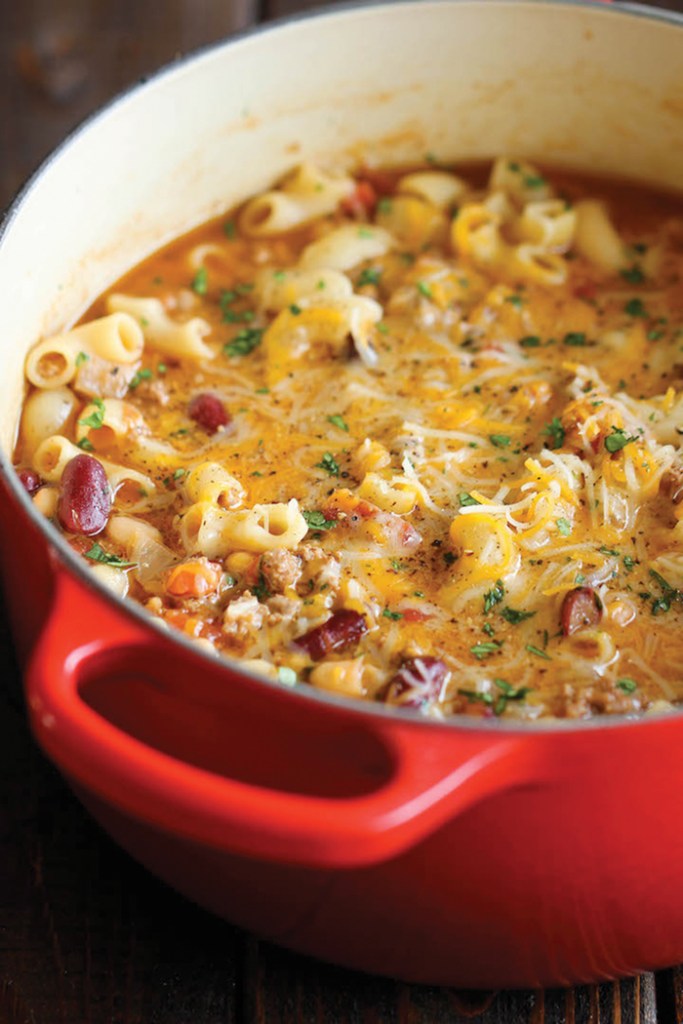 If you don’t have an Instant Pot and you don’t have time in the morning to load your slow cooker, we found some ideas for one-pot pastas that should keep your family full and satisfied.

With so many pasta choices, shapes and sizes, so many ingredients, there’s bound to be one that works for you.

There’s nothing wrong with straight up pasta, but there are numerous options.

A complex carb feeds your body better and won’t lead to spikes in blood sugar.

Brown rice pasta is made of ground up brown rice, and is good for people who have celiac disease or are gluten sensitive. It is also higher in fiber and has fewer calories than white pasta. One cup cooked brown rice pasta has 190 calories. 40 grams of carbs, 4 grams of fiber, 4 grams of protein and 3 grams fat.

Quinoa pasta is full of protein — higher than any flour, and rich in iron and magnesium. It’s also gluten free. It is sometimes combined with brown rice or corn to make pasta. Be sure to read the ingredients list.

Chickpea pasta is made with chickpeas, or garbanzo beans. It has fewer calories (190), twice the fiber and almost twice the protein (11 grams) of white pasta. it has 30-35 grams of carbs. And it packs 8 grams of fiber per serving. This pasta cooks in about 6 minutes.

Buckwheat noodles, also know as soba noodles, are typically served cold. They are lower in calories and carbs than other pasta. Again, make sure buckwheat is the main ingredient. Despite the name, buckwheat is not wheat, so it is gluten free. 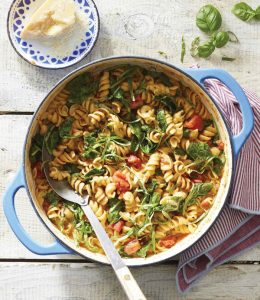 Combine pasta, water, broth, tomatoes, oil, Italian seasoning, onion powder, garlic powder, salt and crushed red pepper in a large pot. Cover and bring to a boil over high heat. Uncover, reduce heat to medium-high and cook, stirring frequently, for 5 minutes. Str in kale and cook, stirring often, until most of the liquid has been absorbed, 5-7 minutes more. If using spinach, add it after about 10 minutes. It cooks in 2-3 minutes. Stir in basil. Garnish with parmesan.

Forget the tuna casserole with the cream soups. This one is done in just 35 minutes.

1/2 cup Castelvetrano olives, cut away from the pit

2 tsp. fresh lemon zest, plus the juice of half a lemon

Combine water, spaghetti, olives, lemon zest, lemon juice, salt and pepper in a large, deep skillet. Bring to a boil, reduce heat to a lively simmer and cook, stirring occasionally, until most of the water is absorbed and the pasta is tender, 10 to 12 minutes. Remove from heat and add tuna, dill and oil. Can use green onions in place of dill.

In a large skillet over medium high heat, heat oil. Add shallot and garlic and cook until soft, 3 minutes. Add ham and cook until crispy, stirring occasionally, 5 minutes. Season with pepper. Add tortellini and frozen peas and stir until coated, then pour over chicken broth. Simmer until tortellini is al dente, 6 minutes.

Can substitute other cheese for Swiss, such as cheddar or provolone.

One Pot Chili Mac and Cheese

Heat oil oil in a large skillet or Dutch oven over medium high heat. Add onion, garlic and ground beef and cook until browned, 3-5 minutes, making sure to crumble the beef as it cooks. Drain excess fat.

Stir in chicken broth, tomatoes, beans, chili powder and cumin. Bring to a simmer and stir in pasta. Bring to a boil and cover, reduce heat and simmer until pasta is cooked through, 10-12 minutes. Remove from heat. Top with cheese and cover until melted, about 2 minutes. Serve with parsley or cilantro. This dish has a soup-like texture.

* Some reviewers halved the amount of chicken broth for a thicker, creamier dish.

Teaching assignment in Beijing: ‘Models of the best of…