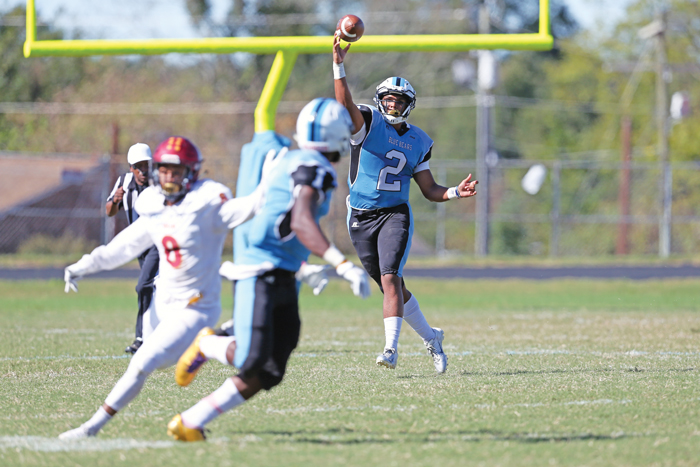 James Sipes file photo/for the Salisbury Post ... Livingstone QB Miles Hayes (2), shown during a game last season against Shaw, completed this pass to Everett Ransom. Hayes started as a freshman and returns for the Blue Bears this season.

SALISBURY — Livingstone’s football team continues to ready itself for the season-opening game on Sept. 7 — at Clark Atlanta.

Sophomore quarterback Mile Hayes, who started as a true freshman last season, played well, as did running back Dorian Edmond, a freshman this year, from Dublin, Ga.

“We did a lot of situational football, during the scrimmage,” said Williams. “A lot of 1 and 10s, 2nd and 7s, 3rd and 5s, plays like that. “The offense looked pretty good, but the defense is a little bit ahead (of the offense) right now, but that’s normally the case this time of year.

“It’s all coming together,” continued Williams. “Miles played particularly well, making good decisions. Edmond got most of the reps at running back, because we held a few players out of the scrimmage.”

Williams said that last Saturday’s rain forced the Blue Bears into the gym for special teams practice. “You can’t work on special teams too much,” he said, “and we’re starting to get that squared away.”

Lazarus Anderson, a freshman from Atlanta, has joined the “quarterback room,” with Hayes and senior Xavier Longerbeam.

“Anderson is looking pretty good and Longerbeam has added about 10 pounds and looks good,” said Williams. “So, we’ve got some good depth there at quarterback.”

Williams is excited about the offense, as nine starters return. “That familiarity should allow us to play faster on offense,” he said. “It’s one of first times that we’ve had the offensive line working together in spring ball and then, have them all back. Plus, we added a couple of guys there when camp started.”

The Clark-Atlanta opener on Sept. 7 will be under the lights, with a 7 p.m. kickoff. Like Livingstone, the Panthers won just three games in 2018.

“We got several players from the Atlanta area and it’s good for those guys to get to play before family and friends,” added Williams. “And then, two home games after that will be big for us. The schedule is favorable this year, for a change (with six home games).”

The Blue Bears open at home on Sept. 14, against Elizabeth City State, a CIAA Northern Division foe, in the West End Classic. Game time is 4 p.m., at Alumni Memorial Stadium. Livingstone hasn’t played the Vikings at home since Oct. 3, 2015, a 41-6 loss, in a driving rainstorm.

The following week, Sept. 21, Livingstone hosts Allen, a second-year program. It will be Livingstone’s Church Fellowship Day and game time will again be at 4 p.m. Livingstone shut out Allen last season, 19-0.