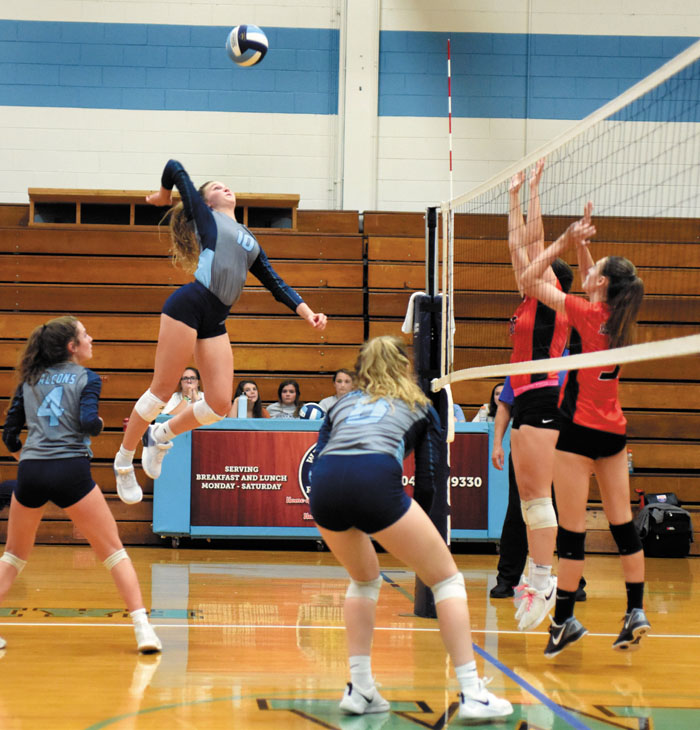 MOUNT ULLA — West Rowan’s Emma Gusler is the team’s only under-sized hitter, but the 5-foot-6 senior may have turned in the best day of her volleyball life as the Falcons swept previously unbeaten South Rowan 25-24, 25-19 and 25-12 on Monday in the West gym.

Gusler, who had all seven of her kills at key moments, credited her teammates, her coaches and her mattress.

“I got 12 hours of sleep last night,” Gusler said.

Maybe everyone should try it.

Gusler missed West’s two victories on Saturday because she was busy taking the SAT, but she made up for it.

“Emma had a great day on the right side,” West coach Jan Dowling said. “Most teams will try to double-block our big bangers (Tori Hester and KK Dowling), so Emma is going to have one-on-one. Our setter (Allison Ennis) was sending it back to her, and Emma was taking advantage of her chances.”

West (5-0) is really bouncy, really talented and relatively tall with a lot of 5-10 types, but South (3-1) had every chance to win the first set. A block by 5-foot-11 sophomore Kelcie Love gave the Falcons set point.

“We came out playing so well, playing with a lot of confidence, playing like we knew we were going to win,” said South standout Kira Rymer, who was celebrating her 17th birthday. “We had them in that first set, but then they came back at the end. And after that, they were just really good. Tori is good. KK is good. We just couldn’t get enough touches, couldn’t get any blocks.”

Rymer was so good in the opening set that West resorted to triple-blocking her. Once Rymer was neutralized, South wasn’t getting many kills.

South also hung with West in the early stages of the second set. It was 8-all, but then Gusler, Love and Hester, a 5-10 senior with an exceptional vertical jump, led a furious West surge to an 18-9 lead.

A nose-to-the-floor dig by freshman libero Brooke Kennerly led to one of Ennis’ 41 assists and one of Hester’s 22 kills to finish the set.

By the third set, South was worn down.  West had all the momentum and started pulling away with quick points. It was bump-set-spike volleyball, and Hester was jack-hammering balls straight into the floor. It was 6-all, but then suddenly it was 21-11, Falcons were jumping around, and the crowd was noisy.

“West plays at a pace that we hadn’t seen, and that was the biggest thing today,” South coach Jenna Horne said. “I was pleased with how we played and how our girls competed, and if we’d been able to win that first set it may have gone differently. When you get a team down, you have to finish.”

A block by 5-11 Carly Stiller ended the third set and the match. West hasn’t lost a set yet, much less a match, and the schedule hasn’t been easy.

“We have a lot of experienced players, the chemistry is very good, and we’ve got some freshmen who are really helping us,” Gusler said.

It’s no surprise that West is strong. Dowling says it’s the most balanced team she’s ever had. The Falcons have six of their top eight back from a 19-5 team that shared the 3A North Piedmont Conference title with Carson and they’ve added impact freshmen Kennerly and Ashlee Ennis.

“We’ve got two freshmen who aren’t afraid of anything and they’re getting after it,” Coach Dowling said. “They don’t let balls hit the floor, and whenever they do something good, everyone gets excited. Our older girls feed off their energy.”

South left the gym upbeat. This was a match the Raiders wanted to win, but not one anyone expected them to win. After getting a share of the 2A Central Carolina Conference championship a year ago, South, which already has beaten perennial power Ledford, has its sights set on an outright title this year.

“We did well today,” Rymer said. “We hustled. We were loud and we were enthusiastic. We were just up against a really good team.”

NOTES: Kira Rymer had 14 kills and four blocks. Anna Rymer, Kira’s cousin, had six kills and nine assists. Ashlyn Faw had nine digs. Payton Black had eight digs. … West’s jayvees won 25-15 and 25-12. … Dowling coached South before she moved over to West. A number of her former South players attended the game, including Kayla Morrow, Katie Wise and Taylor May. … Besides the kills, Hester had 10 digs and four aces. Dowling had 12 kills, eight digs and four aces. Kennerly had 10 digs. Love had four kills and four blocks.