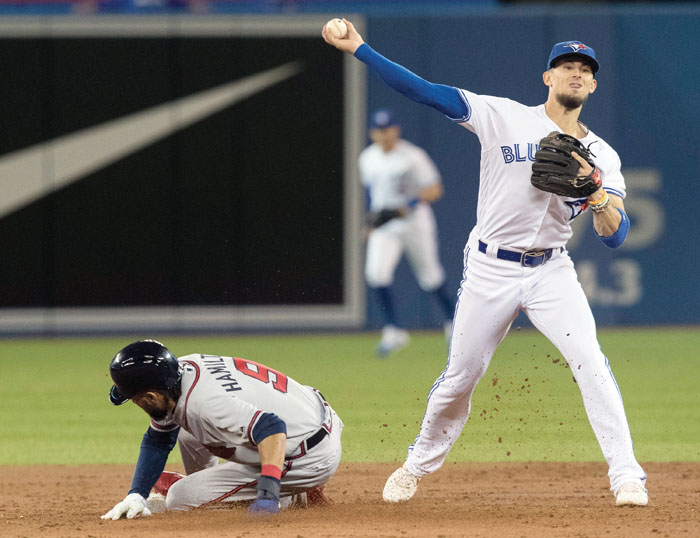 Smoak hit an RBI single off Mike Soroka in a two-run first, and added his 20th homer in the seventh against Sean Newcomb.

The NL East-leading Braves lost their second straight following an eight-game winning streak that matched a season high. They managed just four runs while playing in New York, Colorado and Toronto in a span of three days.

Former Blue Jays third baseman Josh Donaldson went 0 for 4 in his first game back in Toronto.

The Canadian-born Soroka (10-3) allowed two runs and eight hits in six innings in his first loss in 14 road starts this season. Soroka came in 6-0 with a 1.32 ERA away from home.

Zack Godley (4-5) pitched three innings for the win in relief of opener Wilmer Font. Ken Giles, the seventh Toronto pitcher, got three outs for his 17th save in 18 opportunities, catching Freddie Freeman looking at strike three for the final out.

Before the first pitch, the Blue Jays paid tribute to Donaldon’s Toronto tenure with a highlight video, including his dramatic slide to score the winning run in the 2016 ALDS against Texas. Standing alone in shallow right field, where he had been warming up, Donaldson tipped his cap and turned to acknowledge the cheers from the crowd of 24,578.

Soroka, who is from Calgary, faced the Blue Jays for the first time in June 2018, allowing four runs and eight hits in 4 2/3 innings.

Braves: OF Austin Riley (right knee) started at DH and went 2 for 5 and scored a run Monday in his first rehab game with Triple-A Gwinnett. … RHP Darren O’Day (right forearm) allowed one hit and struck out one in a scoreless inning with Class A Florida. His next outing is expected to be at Triple-A.

Blue Jays: 2B Devon Travis (left knee surgery) has been ruled out for the remainder of the season. Travis was injured during spring training and did not play for Toronto in 2019.

Blue Jays: RHP Jacob Waguespack (4-1, 3.63 ERA) pitched seven shutout innings against the Dodgers in his previous outing and is unbeaten in five starts.