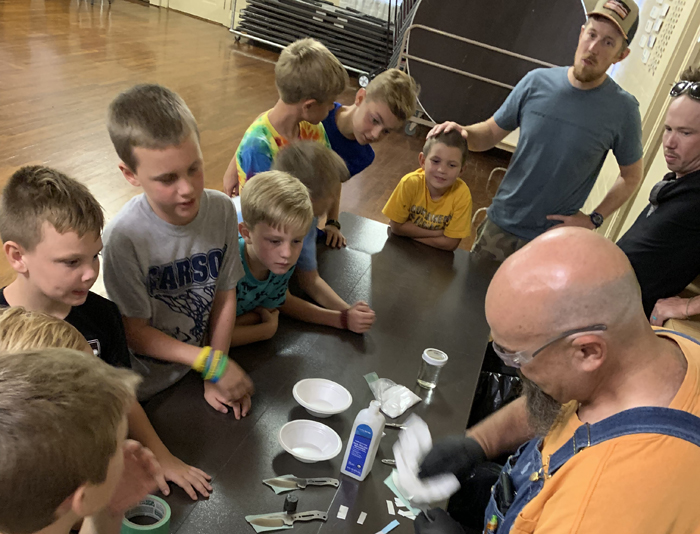 David Diggs cleans a blade with acetone to make sure it’s clean before he engraves it. Susan Shinn Turner/For the Salisbury Post

SALISBURY — Cub Scouts bound into the Parish Building of Grace Lutheran Church, much like a litter of puppies and positively vibrating with energy.

Who wouldn’t be excited? They’re here to make hunting knives.

Diggs, owner of Diggs Custom Knives, would attend the next few Scout meetings to show the boys how knives are made and let them help in the process.

At a recent meeting, Diggs was engraving the boys’ names or initials in the blades of their knives.

Diggs typically makes hunting knives that are 8 inches long, but these are only 6½ inches.

“I designed these for the Cub Scouts,” Diggs explains, “but a lot of customers are ordering them for their every-day carry  knives.”

Diggs, a lifelong member of Grace church, made a knife for Trent Rivers for his Eagle Scout gift, says Jamey Basinger, one of the Cub Scouts’ dads. All of the dads or other caregivers come to the meetings, he says.

“It’s pretty much a group effort.”

Rivers’ knife, he says, “was really something else. David is definitely an artisan.”

“We spend a lot of time together, and we are good friends,” Basinger says.

Diggs came up with the knife project for the Cub Scouts. He donated the blank metal blades, and one of his suppliers, Tim Kipps of J. Hue Customs, donated the wood for the handles.

“It’s going to be something special,” Basinger says.

During the first session, Diggs explained the scope of the project to the boys. The boys crowded around him as he showed them how the engraving process works.

First, Diggs taped all the blade surfaces, except where the engraving will be. He mixed together distilled vinegar and salt, then dipped a metal bolt in the solution and carefully applied it to the blade. The Scouts watched, entranced.

Diggs’ daughter, Claudia, was on hand to help. She is a seventh-grader at Erwin Middle School and makes a pouch for each completed knife.

Later in the process, Diggs will dip the blades in ferric chloride to create a black finish, then put them in a bullet tumbler to give the blades a stonewash texture. Once Diggs puts the handles on the knives, he will shape them, and the boys will sand them. Then, they’ll have a tool they can be proud of, Diggs says.

“I just wanted them to have their own custom knife that they helped make and that they can grow up with.”