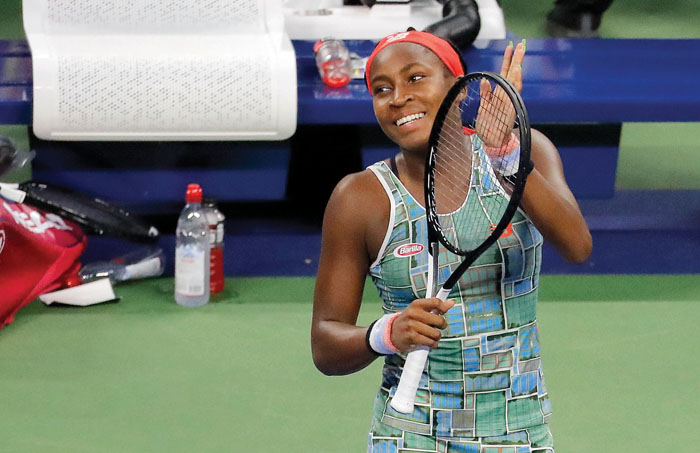 Coco Gauff, of the United States, reacts after defeating Anastasia Potapova, of Russia, during the first round of the US Open tennis tournament Tuesday, Aug. 27, 2019, in New York. (AP Photo/Julie Jacobson)

NEW YORK (AP) — Here’s how new all of this is to Coco Gauff: She didn’t quite realize she only has to play every other day at the U.S. Open.

“I’m still used to playing juniors,” the American said with a chuckle, “so I forgot about the day off.”

She’s still just 15. She’s competing in just her second Grand Slam tournament. And yet she’s definitely showing she can perform like someone much older and more experienced.

With her parents jumping out of their front-row seats over and over again, and a raucous partisan crowd backing her at Louis Armstrong Stadium, Gauff trailed by a set and a break, then again by a break in the third set, before coming up big down the stretch to get past Anastasia Potapova of Russia 3-6, 6-2, 6-4 in her debut at Flushing Meadows.

“Honestly, I mean, I really don’t remember the match too well,” Gauff said, “because everything is still a blur.”

Here is what is clear: She displayed the same sort of gumption she did while saving match points in a Centre Court comeback at Wimbledon during her captivating run to the fourth round there last month.

Gauff simply does not give in or give up.

As strong as her serve and other strokes are, she’s already showing an ability to make adjustments during a match and figure out ways to win, time and again. Gauff was ranked 313th when she got a wild-card invitation into qualifying at Wimbledon, then became the youngest player in history to make it through those preliminary rounds at that prestigious tournament.

After beating Venus Williams in the first round, then a 2017 Wimbledon semifinalist in the second, Gauff got to Week 2 before her surprising showing there ended with a loss to eventual champion Simona Halep.

It was all enough to persuade the U.S. Tennis Association to provide a wild card into its event, a special entry she needed because her ranking is 140th.

On a busy Day 2 at the year’s last Grand Slam tournament, there still were matches involving 2017 champion Sloane Stephens and the temperamental Nick Kyrgios to be played later.

Earlier, four top-10 seeds in the bottom half of the draw all tumbled out in the first round: No. 4 Dominic Thiem, a two-time French Open runner-up; No. 8 Stefanos Tsitipas, an Australian Open semifinalist; No. 9 Karen Khachanov, a French Open quarterfinalist; and No. 10 Roberto Bautista Agut, a Wimbledon semifinalist. The biggest beneficiary of all of those departures could be three-time champion Rafael Nadal, the No. 2 seed, who found no such trouble, easily putting together a 6-3, 6-2, 6-2 victory at night over John Millman, the Australian who upset Roger Federer a year ago in New York.

In women’s action, defending champion and No. 1 seed Naomi Osaka dropped her first five games against 84th-ranked Anna Blinkova, wasted a match point in the second set, then finally put together a 6-4, 6-7 (5), 6-2 victory.

A couple of years ago, when Gauff was 13, she got a chance to practice with Osaka.

“Her dad and my dad are actually quite cool,” Osaka said Tuesday. “She seems to be doing great.”

Gauff’s father and mother were kind of quiet in the early going at Armstrong, until their daughter waved to her guest box after falling behind 3-0 early.

“I was telling them to get hyped up more. I needed more positive energy. I was nervous. Just looking at them when they’re giving me a fist pump gives me a little reassurance,” Gauff explained. “I think they were nervous. They wanted to stay more reserved, too. I was like, ‘No, I need you guys to come on, stand up.’”

They obliged, yelling and clapping after what seemed to be each point Coco won. Dad also pounded a fist on his chest repeatedly.

“I think I gave them a heart attack, especially my mom,” Gauff said. “And my dad, he looks a little bit tired over there, too.”

Gauff did not start well against the 72nd-ranked Potapova.

Not well at all.

Gauff, who is based in Florida, double-faulted three times in her first service game on a breezy evening with the temperature sliding down to about 70 degrees.

Maybe she was trying to be too fine, sending shots right near the lines. The high-risk, high-reward strategy more often yielded results in the former category than in the latter at the outset. Both players hit the ball violently while covering the court well, creating lengthy, entertaining points often introduced by serves at, or above, 100 mph.

They seemed like a couple of talented and experienced veterans with the benefit of years on tour, not a pair of teens each in the U.S. Open’s main draw for the first time. Potapova is a past Wimbledon junior champion, and still only 18, so this was the youngest matchup in the first round at Flushing Meadows.

Soon enough it was 5-1, and then that set belonged to Potapova, with Gauff turning to her guest box and putting her palms up, as if to ask, “What can I do differently?”

Not much later, when Potapova broke to open the second set, Gauff’s shoulders slumped and she whacked her racket against her right leg.

And that’s when her turnaround began.

With spectators roaring their approval, Gauff broke right back and was on her way to dominating the second set.

There was some trouble still awaiting. Gauff went down 1-0 in the third set, then took four games in a row. But at 4-1, Potapova took a medical timeout and a trainer massaged her right shoulder. She quickly pulled even at 4-all.

Gauff took command from there, breaking and then serving out the victory. This is still all so new to her. She doesn’t show it, though.