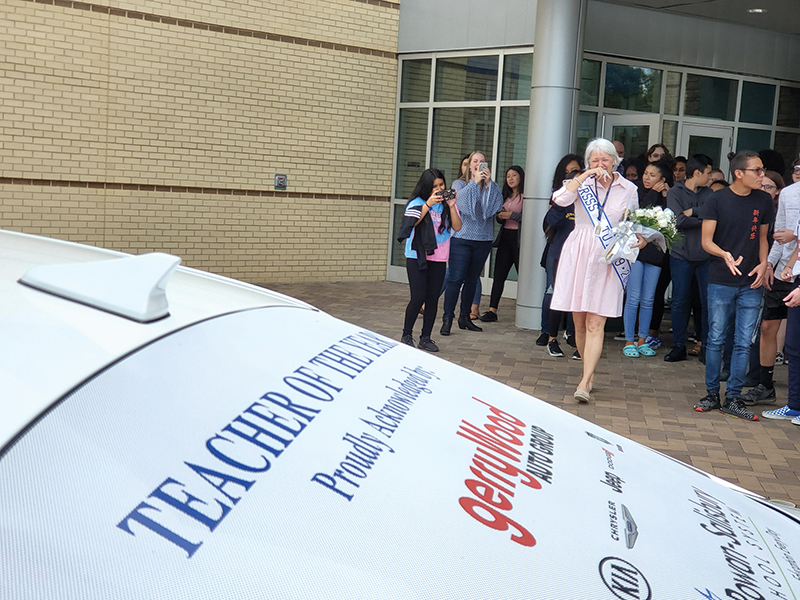 Josh Bergeron / Salisbury Post - Rowan County Early College teacher Theresa Pierce reacts as she sees a free, new car that she'll be able to use for a year as a result of her teacher-of-the-year honor.

Pierce, who teaches honors world and American history at Rowan County Early College, received the 2019-20 Teacher of the Year award Monday at a surprise assembly. Her first time winning the award was in 2011, when she was lead teacher and curriculum coach at Overton Elementary School.

On Monday, Superintendent Lynn Moody entered the auditorium in Rowan-Cabarrus Community College’s 600 building, filled with students and teachers, asking, “Is Theresa Pierce here?” and announcing that she won the award. Sitting near the back of the room, Pierce stood up, descended stairs and struggled to hide her emotions as she was presented the Teacher of the Year sash, roses and balloons.

“It’s humbling because there are just so many amazing educators in this county,” Pierce said after the presentation.

She also received a new car, courtesy of Gerry Wood Auto Group, to use for a year. Insurance and maintenance costs are covered, too.

Pierce said she was caught off guard by the award, despite the fact that her entire family knew and attended Monday’s presentation.

“Even my 91-year-old Mamaw knew, and even my 6-year-old grandson knew and I didn’t know,” Pierce said.

After Monday’s emotional presentation, Moody called Pierce the model of an outstanding teacher.

“I don’t know anybody who is more committed to the craft of teaching, who loves her students any more than she does,” Moody told the Post. “If you’ve had the pleasure of being in her classroom, even just to watch her for a day, you understand why she was selected as our Teacher of the Year.”

Pierce, in her 35th year as an educator, said she became a teacher because so many made a difference in her life. And, Pierce said, she wanted to make a difference in other people’s lives, too.

“It’s my goal to listen to every conversation, to be a blessing to every single kid that walks in that door,” she said. “For me, now that I’m older, it’s more about building up the profession and encouraging young people to become teachers. For me, it’s been the best profession in the world.”

Pierce recalled a time several years ago when a student told her, “We’re going to scare you off.”

“If you think about it, you want the doctor to treat you,” she said. “To me, that’s what we’re going to do with the renewal system. Every kid. Every subject. Every day. Everything matters to that kid. How can we help them become employed, or enlisted or enrolled?”

Ask Us: Maintenance is big factor in RSS budget…