‘About all of you’: Knollwood’s Hairston named 2019-20 Principal of the Year 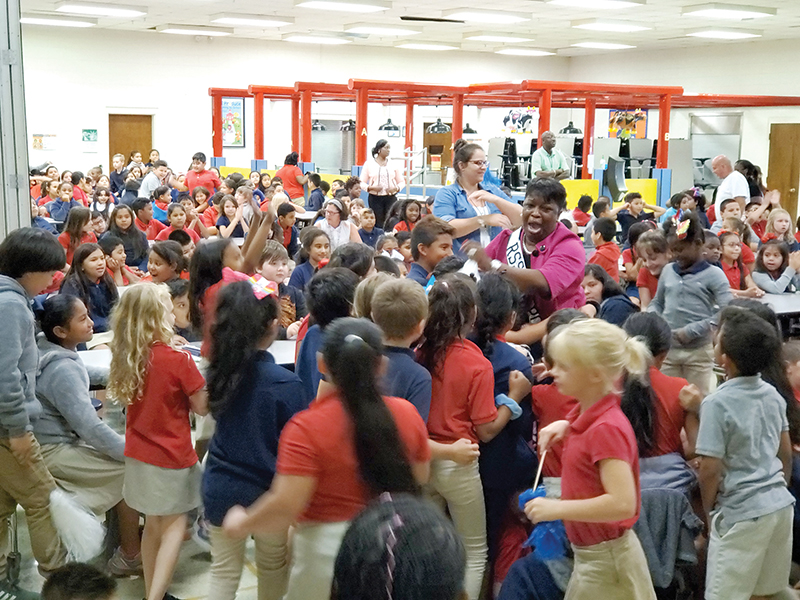 Suspicious about what was going on, Hairston returned from a meeting Monday with another principal to a dark cafeteria filled with students and teachers. School system administrators said they told Hairston that there was an emergency at the school and, as she entered the building, she noticed TV news vehicles in the parking lot.

Curtains in the room parted, revealing school system administrators and family members. Superintendent Lynn Moody stepped in front the crowd and shouted, “Shonda Hariston, you are the Principal of the Year.”

The Knollwood principal stepped on stage to a raucous applause from the school’s students with tears rolling down her face. She hugged family members, administrators and teachers before heading into the crowd of students for high-fives and more hugs.

“This Principal of the Year is because I have students of the year, teachers of the year and I have parents of the year,” Hairston said on stage. “So this recognition is not just about Mrs. Hairston. It’s about all of you.”

But it wasn’t Hairston’s first time winning the honor. In 2012, also as Knollwood principal, she was named Principal of the Year. And Moody quickly recalled the long list of reasons why Hairston is a top-tier principal.

“She strategically plans for the academic performance of her children,” Moody said. “She thinks deeply about the work. She is committed to the whole child, and she doesn’t just worry about test scores but about how she provides experiences.”

Even in giving a speech to students after receiving the award, Hairston was teaching, reminding the crowd that Knollwood’s theme this year is to “wander often and wonder always.”

“She teaches children to think. Teachers that have worked for Shonda have grown immensely under her leadership,” Moody said. “She’s a model for all of our principals in the district and for me.”

Hairston, who is in her 13th year as principal of Knollwood, talked about the freedom offered by Rowan-Salisbury Schools’ renewal status when asked what she thinks made her the 2019-20 Principal of the Year.

“I think that we have been given the freedom to do some things differently for our students, exposing them to experience, being very creative with them and providing them opportunities, I think, that they would not ordinarily have,” Hairston said.

And she said the second time winning the award is special and different, in part because of renewal status. Moody noted that Hairston was among the first principals to embrace the change.

Hairston succeeds South Rowan Principal Kelly Withers, who was the 2018-19 Principal of the Yyear. Coincidentally, Hairston also followed Withers when she received the honor in 2012. At the time, Withers was principal of Carson High School.