SALISBURY — Philip Johnson was at the top of his game.

An East Rowan High School senior, he was a two-time county champion in cross country. He was a major player in one of East’s best cross country teams ever. And it wasn’t just East Rowan saying that.

“They did what I expected,” said Dwayne Fink, South Rowan cross country coach in 2002.”Their top runners were just really strong. It’s hard to compete with a team that has that strength up top.”

The Mustangs had captured the Rowan County Cross Country Meet championship that year, too, bringing a powerhouse back to prominence. East Rowan hadn’t taken the county meet championship in five years after a decade of dominance. And Johnson said he was glad to see East Rowan High win.

“East has been the best in cross country since the ‘80s,” Philip told the Post in 2002. “I wanted the team championship more than I wanted my own.”

It wouldn’t be Philip’s last accolade as a runner for East. He made the all-county team and won conference and divisional championships as well as a number of invitational meets, said his mother Janet Johnson. In October 2002, he won the Wendy’s Invitational Meet in Charlotte with a time of 16:25.5, recording the second-fastest time in school history at the time, behind Benjamin Frick’s 1993 state meet time of 15:57.2. 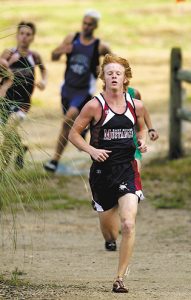 But shortly after going to college, Philip returned home during a break to deliver some news to his parents: He had depression.

Philip would be diagnosed with schizoaffective disorder, in which those affected exhibit schizophrenia and mood disorder symptoms.

“And for the next 12 and a half years of his life, we dealt with those symptoms,” Janet said. “He would ask, ‘Why am I having to go through this.’ And I would say, ‘I don’t know. If I could take it on myself, I would, but we may never know on this side of eternity why you had to go through this.’”

Philip, living in Durham at the time, committed suicide in October. He was 33. His father, Rick Johnson, received the call informing the family that authorities had found Johnson’s body.

Janet says she hopes that, by participating in the Rowan County United Way’s “Into the Light” event on Sept. 21, she can raise awareness about suicide, mental illnesses that can precede it and the accompanying stigma. The event, which will start at 6:30 a.m. at the intersection of Fisher and Main streets, will walk toward the Wallace Education Forum as the sun rises.

At the Wallace Forum, there will be a breakfast program involving David Whisenant, Salisbury Bureau chief for WBTV News; Janet Johnson and Crystal Hobbs. The event will raise money for the United Way, which plans to use it for local mental health programs. Executive Director Jenny Lee said programs funded will look to fill existing gaps in the community.

And mental health is one of three main areas in which the United Way is focusing its attention, starting in January. Its new community impact model will also fund substance abuse and healthy lifestyle programs. Basic-needs programs will receive a small amount of funding, too. But in all areas, according to Lee, the United Way hopes to invest in programs sustainable without its money.

Janet said she hopes that money raised in September can help create a more robust treatment and support system for those struggling with mental health and suicide.

Figuring out where to seek help for Philip was difficult. Some of the supports in place weren’t adequate, she said. Involuntary commitments, for example, may be enough to stabilize someone but not adequate to provide long-term solutions. She said that Daymark Recovery Services, on Statesville Boulevard, is the only local place where people can walk in to receive help, but other counties have better programs.

“I don’t know that there are enough local places to help people,” she said.

And, to be clear, suicide is a growing problem in North Carolina, according to data from the Centers for Disease Control. From 1999 to 2016, the number of suicides in North Carolina increased by 12.7 percent — lower than the nation at large, which showed an increase of 25.4 percent. Among those with and without mental health conditions, men were more likely to commit suicide.

For those left behind, grieving, talking about mental health and suicide is important, said Lee.

“I hope the whole outcome of of this event will be to empower folks to feel comfortable sharing their stories,” said Lee, who attended high school at East Rowan with Philip Johnson. “The more that we talk about it, the more we are able to understand all the aspects of individual situations and the more that we’re able to bring in services to support them. … Tell your story because your story could save a life.”

After more than 20 years of not speaking publicly about it, David Whisenant has been telling his father’s story in recent years, hoping that it would help others and raise awareness.

He still thinks about his dad, who committed suicide in 1987, on a daily basis and hasn’t moved past the “what if” questions, but Whisenant is helping with the Sept. 21 program because he doesn’t feel like he can turn down any chance to talk.

“I think it’s something I’m called to do,” he said. “Speaking about it can make a difference.”

Whisenant said he frequently hears stories from others when he shares his own, especially on social media. Every one of them starts the same way, he said, with someone talking about how their family member or friend committed suicide, sometimes in graphic detail.

“And I read every one of them and respond,” he said. “Frequently, those messages end with ‘I’m glad you’re talking about it,’ and I know that’s kind of the positive part about sharing your story. This is what I have to do.”

Whisenant said he thinks the “Into the Light” walk will help those struggling with suicide or mental health and their family members, especially because of the image of walking toward the sun as it rises — walking out of the darkness.

Those who want to help with the event, become a sponsor or register for the walk, should contact the United Way at 704-633-1802. The United Way is located on the second floor of the Salisbury Post’s building — 131 West Innes St.